Heavy Lifting by Myself

I have some solo video playthroughs under this name on Youtube. I hope to get back to those. Updated my blog title to match for [-]OCD[/-] consistency.
Recommend

Postcards from the Edge (trends I'm seeing on BGG)

All life is only a set of pictures in the brain, among which there is no difference betwixt those born of real things and those born of inward dreamings, and no cause to value the one above the other.
Patron Badge for 2008 through 2014
As a regular around the Geek, I visit a lot of the neighborhoods and see a lot of the goings-on, and I’ve noticed some phenomena that strike me intuitively as significant. Having at least one of my observations confirmed prompted me to post the following. Caution: I have no numbers to back up any of the observations or armchair psychologizing that follows. Enjoy at own risk.

I posted a blogpost, The Revolution Will Not Be Funded on Kickstarter back in December after seeing some negative comments I’d never seen on BGG before about Kickstarter games. Go read the shocking comments over there! Some games that I would’ve previously assumed would be big Kickstarter hits did not fund, and people expressed caution at being burned on other good-looking KS projects such that they figured they’d wait. This response is quite different from the MOAR! response that has been the norm for KS projects.

Qwertymartin directed me to this update from Adam West’s blog: Kickstarter Analytics: Significant $$ Drop for KS in 2014! that tells a sobering story regarding KS funding: it’s down and trending down even for successes. It’s worth a read, but I’ll post Adam’s conclusions here:

adamw wrote:
However, I'm betting KS will decrease in over all revenue in 2015 for board and card games and the number of games will increase. So the separation will continue. There will still be big winners, but there will be alot more losers too. And the average/median per campaign will decline. The day of easy money on KS has ended.

I'd also say the over all quality of presentation and expectation has gone up significantly. Folks are not tolerating weakly defined games, or games with poor illustrations or unreasonable reward levels. It's a mature market now in my opinion. And it will continue to be refined in 2015 with similar trends.
So, we have a decrease of KS enthusiasm that is quantifiably demonstrated. I'm also seeing a rise of "Play X games X times" challenges and goals. I think the enthusiasm for these challenges represents a solution people have been seeking. I’m even seeing variations on variations of the X games X times challenge as people tailor them to fit their preferences. Just doing more armchair psychologizing, I think this trend corresponds to a feeling of being overfed on games and needing to gain some control over one's collection and hobby habits as more and more people are feeling like this: 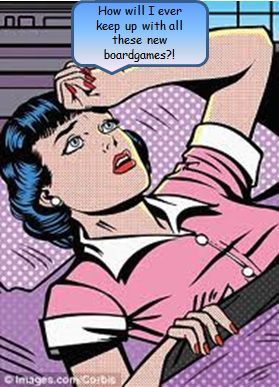 … and looking for a way out. Spending more time on BGG is usually not the answer since BGG is, in one facet at least, a giant advertisement for new products. By making a goal – a public one at that – you can enforce some discipline within yourself to stay focused on what you have and not be so distracted by all the new stuff that bombards. Furthermore, it’s a discipline that can be shared via BGG rather than one requiring the shunning thereof. In my biggest period of trying to gain control over my habits, I pushed away from BGG for a week or so. These challenges give you a way to use BGG in a self-control enforcing, not detracting, way.

OK, another thing I'm seeing is that people (like me) are suddenly flocking to solitaire gaming. From comments I see on the Solitaire Games on Your Table geeklist and 1P Guild, we're blowing by 700 entries in a month and, apparently, activity has shot way up just in the past couple months*. It’s rather ridiculous trying to keep up with all the activity of 700+ entries, but there’s a goldmine of posts about solitaire games and variants if you want it.

There are a lot of reasons why people play solitaire games, of course, but I’m curious as to why people are turning to solitaire gaming more lately. I’m not sure I can even hazard a guess. I started a thread asking people -- if they’re new to solo gaming – why they decided to pick it up recently. If there’s a common thread, I’m not seeing it. I understand the reasons people have posted in response to my query regarding "why solitaire gaming?", but I’m not getting the “why now?” part of it. It may be simply a zeitgeist whose time has come.

On that note, remember in 2008 when Pandemic came out and everyone went crazy for it and people were, like, “OMG! Coop games!” and publishers were, like, “OMG! Coop game$!”? I don’t have numbers, but sure seems that a lot more cooperative games have been published in the years since and cooperative gaming has grown in popularity and diversity (e.g., semi-coop). Well, I think that’s about to happen with solitaire games.

I think designers and publishers are realizing that making a solitaire variant for their game opens up the number of people who are interested in it by far. For a great read on the subject, check out Morten Monrad Pedersen’s excellent article HERE. In short, he makes the case that by virtue of his experience with the automa solo variant for the Viticulture Kickstarter, he realized (through actual quantitative analysis, unlike what I'm doing here) that a solitaire module is a much more appealing stretch goal to potential backers than he would’ve imagined. Perhaps the Ragnar Brothers read his post because they recently announced a solitaire variant for their current Kickstarter game: DRCongo: Hope out of Horror the SOLO GAME.

I’m thinking just like we did with cooperative games, we’re about to enter an explosive period of solitaire games both in number and variation. As someone who recently got into solitaire gaming, this could be wishful thinking on my part, but I think in addition to the handwriting on the wall I’m claiming to see, it makes artistic and commercial sense that this niche corner of the hobby is next in line to mature via an infusion of energy and attention. Or more crassly, I think the money will simply follow the crowd, and it makes a lot of sense, especially for KS projects that no longer have such an easy go of it.

The last trend I see lately is that more and more people (again, like little ol’ me) are getting into the videotaping game. Whereas it was a handful of people just a couple years ago, I’m seeing an explosion of new videos popping up that aren’t by the big names you might expect. These are both sessions and straightforward reviews (and even those unboxing videos that make me cringe), and I see everything from traditional new game reviews to solitaire games to playthroughs of either.

My reasons for doing it are detailed HERE, and I’m sure everyone has their own particular set of circumstances. With the advent of better and better cameras, it’s fairly easy to make a reasonably good quality video these days simply using your phone. I was doing fine (according to feedback I’d gotten) with my i5 and I recently upgraded to the i6+ which is even better. Like most devices these days, it’s more of a video camera that can make phone calls than the other way around. Also, I think (for me at least), some of the more popular reviewers have made it look easier than it really is. I chuckle at that now for all the challenges I’m discovering, but nonetheless, it is doable if you’re willing to make the effort.

I can only wonder at how things will shake out as more and more people like myself add video content to the pool and clamor for attention. Those who don’t realize they’re doing it for, let’s say, more shallow reasons, will probably soon find out they don’t have the stamina to continue at it. At the same time, new voices may siphon viewers away from the big names as the find reviewers who fit them better. I love one reviewer’s enthusiasm, for example, but his reviews are pretty much useless to me, so I could easily find myself watching someone covering heavy games (my favorite genre) and/or generally pickier (my state of mind in the hobby). I’ve decided to focus on heavy solitaire games and share my interests there which seems like a niche within a niche, but this is for fun not profit, so it feels right.

Well, thanks for listening. As per the disclaimer, these are all just thoughts from an armchair Malcolm Gladwell. I do find the observation of behavior within the hobby of particular interest, both within myself (another shameless blog reference: There and Back Again: A Habit’s Journey (2014 Review) and the hobby in general, so I look forward to what other people are hearing and seeing out there.

*Edit #1: For some hard data on the explosion, check out this illuminating graph on the membership explosion of the 1P Guild: 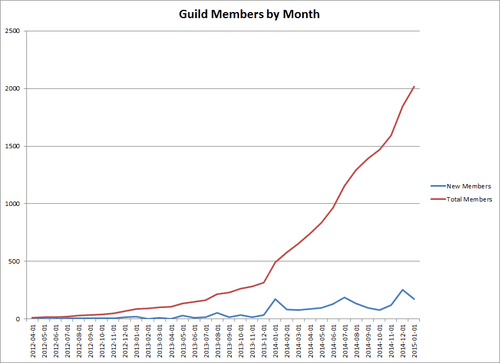 Edit #2: For completeness, I'm adding this chart that Morten just posted today (image link not available; have to click on the post):