• AEG and Fun to 11 have announced a partnership for publication of Epic PVP: Fantasy, a card game from Ryan Miller and Fun to 11's Luke Peterschmidt that sounds like a twist on the shuffle-building concept at the heart of AEG's Smash Up.

The gist of Epic PVP: Fantasy is that before starting the game each player chooses a class deck (paladin, ranger, monk, etc.) and a race deck (human, dwarf, goblin, etc.), then shuffles those cards together to mix powers and effects in a combination unique to that creation. As for the rest of gameplay:

Quote:
The goal of the game is to defeat your opponent by reducing them to zero life. Players do this by playing moves that act as both attacks and blocks as well as with special cards and abilities granted by the player's choice of class and race.

During a turn, a player adds cards to their "aggression pile", then chooses how many cards to draw from their aggression pile into their hand. The player uses the aggression provided by the cards that remain in their aggression pile to play move cards to block incoming enemy attacks. If an attack isn't blocked, the player takes damage, specifically one damage per unblocked enemy attack. Then all the moves played by that player become attacks for the opponent to deal with on the opponent's next turn. There's more to it than that, but those are the basics...
AEG and Fun to 11 plan to launch a Kickstarter project for Epic PVP: Fantasy on January 21, 2015, with a bonus Dark Elf deck promised to everyone if the project clears a backer hurdle that same day. It's a clever idea, and I expect to see more such stretch goals in the future, just as I expect to see more such Epic PVP: XXXXXX games with something else in the place of "fantasy".

• Greater Than Games has announced three new expansions for its line of Sentinels games, with one of those items being Villains of the Multiverse, an expansion for Sentinels of the Multiverse that includes ten villains who work as a team rather than standalone characters as well as two new environments for any SotM game.

Greater Than Games plans to start taking preorders for these items through its website on January 19, 2015. 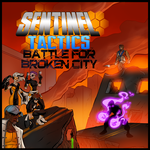 • In what I think is a new record for longest time from the creation of a game listing on BGG to publication, Looney Labs has announced an April 10, 2015 release date for Andy Looney's Just Desserts, the BGG listing for which was created in July 2005.

Quote:
The guests are here, and they're hungry, so try to be the best waiter at this café by making sure that all the guests get their Just Desserts!

In this card game, each player starts with a hand of three dessert cards while three guest cards are placed in the center of the table; each dessert card shows 1-3 tastes that it satisfies, such as chocolate, fruit, or pastry, while the guest cards show what they crave as well as what they refuse to eat. On a turn, you draw a dessert card, add a guest card to the table from the deck, then take one of three actions:

• Serve (and claim) one or two guests by discarding one or more dessert cards to give them what they want (while avoiding what they don't want); if you give a guest their favorite item, you get tipped with an extra dessert card.

• Dump as many dessert cards as you want, then drawing that many cards from the deck.

At the end of your turn, discard guests from the table so that only one guest of each "suit" is still waiting to be served — but the guest heading out the door (on top of the discard pile) can still be claimed by any waiter. If at any time you've served three guests of the same suit or five guests of different suits, then you win!

Just Desserts includes game variants that allow you to steal guests from another waiter by sending more sweets their way, to force other waiters to each give up one guest, and to hold a surprise party to claim a guest out of turn.

• Susumu Kawasaki's Traders of Osaka is a new version of his Traders of Carthage, which was first released from his own Kawasaki Factory in 2006, then picked up by Z-Man Games in 2008. Traders of Osaka has a Q3 2015 release date, and since it's not clear at the moment whether anything fundamental has changed with the game or whether we're talking only about a different map (if that), I'd adhered to the "no penguins in Westeros" principle of creating a new BGG listing for this design. Here's an overview of what's going on in the game:

Quote:
In charge of valuable cargo, you must deliver it from Osaka to Edo — but fierce competition and the Black Tide may sink your hopes for fortune!

Set sail for Japan in Traders of Osaka, a game for traders that's full of opportunities...and opportunists! On a turn, you buy goods, take coins, or reserve a card; whenever you buy goods, you move one or more ships, and when a ship reaches Edo, you sell your goods to score points while sinking other player's cargo under the ocean waves.