• German publisher Hans im Glück has released information about two titles due out in early 2015, with one of them being the long-awaited return of Wolfgang Kramer and Richard Ulrich's Spiel des Jahres-winning El Grande in the form of El Grande Big Box, with this collection containing all the expansions that have been officially released over the years: Grand Inquisitor & Colonies, Grandissimo, King & Intrigue, King & Intrigue: Player's Edition, and King & Intrigue: Special Cards.

This edition marks the 20th anniversary of El Grande's publication in 1995, and the description of this item from Dutch publisher 999 Games (which is releasing a Dutch El Grande Big Box) also mentions a "Jubileumuitbreiding", or "anniversary extension". Hans im Glück makes no mention of that item in its description, but perhaps I'll be able to find out something about it during Spielwarenmesse, the trade show in Nürnberg, Germany that opens on January 28, 2015.

Z-Man Games has confirmed to me that it will release El Grande Big Box in English in 2015. 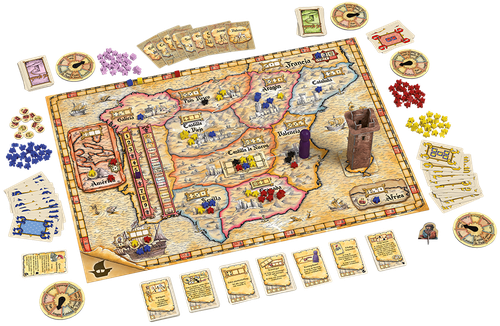 • It's only January, and the camel quotient of 2015 is already fulfilled thanks to Auf den Spuren von Marco Polo, a new title from Tzolk'in designers Simone Luciani and Daniele Tascini that placed first in the 2012 Premio Archimede game design competition. The game description on that contest page is meager — "In the tracks of the great explorer, you must complete the most profitable contracts by making the best use of dice to choose your actions." — and the description from Hans im Glück is equally brief:

Quote:
In 1271, 17-year-old Marco Polo started on a journey to China with his father and older brother. After a long and grueling journey that led through Jerusalem and Mesopotamia and over the "Silk Road", they reached the court of Kublai Khan in 1275.

In Auf den Spuren von Marco Polo, players recreate this journey.
As for the look of the game, here's the version that won the 2012 Premio Archimede: 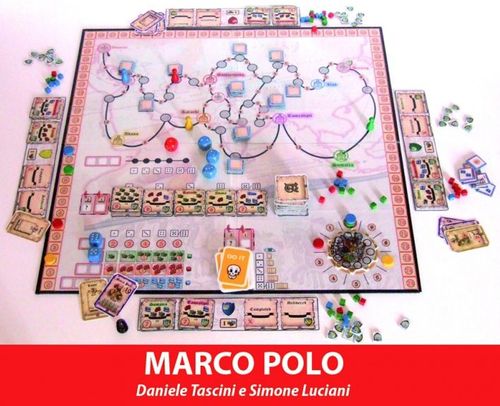 • Queen Games has revealed some details about a quartet of games that it will display at Spielwarenmesse and release in 2015, starting with Parfum by designers Marco Ruskowski and Marcel Süßelbeck, who previously designed the Spiel des Jahres-nominated Fresco, also from Queen. An overview:

Quote:
Who will be the most successful perfumer? Parfum takes the players to the wonderful world of fragrances. Using ingredients like vanilla, lavender or violets, the players distill precious essences in order to create unique perfumes. Only the player conceding their clientele's preferences will be able to sell their perfume. Each customer favors their specific fragrance that must be contained in a flask to make them buy it. 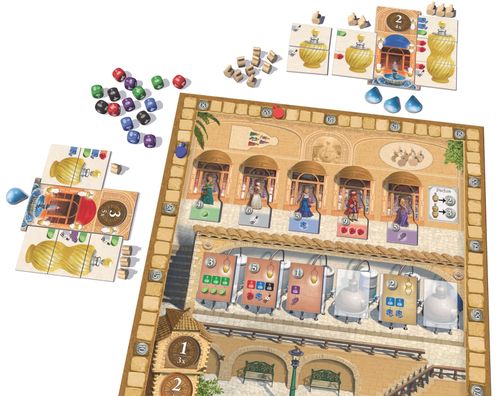 • Queen's Architect is from apparent first-time designer Volker Schächtele and seems to tick the boxes of what you'd expect from someone who desires to be the queen's architect:

Quote:
In Queen's Architect, you're in demand all over the realm! Villages, monasteries and towns need your help to construct important buildings and establishments. Assume the role of an architect and assemble a competent band of craftsmen. Raise buildings and assist the people with small repairs or farm work. The Queen will reward you with her appreciation and with coins. Gain the privilege of constructing the new royal palace, and you will win the game as the land's most successful architect! 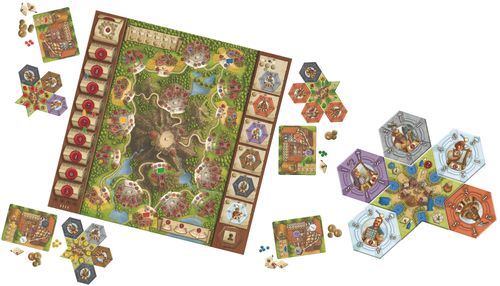 • With Push a Monster, designers Wolfgang Dirscherl and Manfred Reindl have a dexterity game of sorts in which you're rewarded for setting up others for failure:

Quote:
The monsters have been let loose in the monster arena! Here they can tease, taunt and tussle with the other monsters using every trick in the book. They push and squeeze and throw elbows and sometimes even poke one another with their sharp fingers.

Players in Push a Monster take turns doing exactly that: pushing a monster, with them trying to push that monster onto an elevated platform while not pushing off any other monsters already there. If a monster does fall on their turn, each other player receives a token for each monster that falls. At the end of the game, everyone lines up all of the tokens they won, and whoever has the longest row wins! 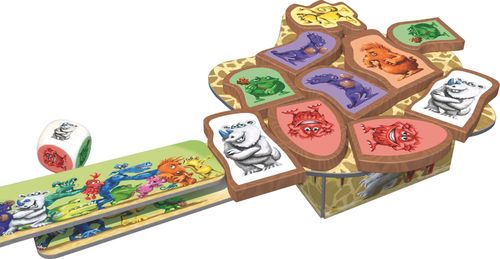 • Finally, Michael Schacht has the memory-based children's game Chef Alfredo, and for the life of me I can't understand why Alfredo doesn't just lift the lids of the pots on the stove to see what's cooking. Perhaps he's trying to test himself, to challenge himself in order to be better girded against memory loss in his old age? Whatever the reason, here's what's going on in this game:

Quote:
Head chef Alfredo is about to lose his head in despair because he can't recall which soup is boiling in which pot. Can you help him allot the carrots, garlic, beans and tomatoes to the proper pots? What's more, can you make sure that your fellow players have also put their ingredients into the proper pots?

In Chef Alfredo, four pots are each seeded with one of four ingredients. On a turn, the active player rolls a die, then either swaps the positions of two pots on the stove or adds the depicted ingredient to the proper pot. The next player can either trust that you've done the right thing or call you out, dumping out the ingredients of the pot to which you added something with the player who made the right move claiming a helper token.

The player who best spots the pots – even when they change hotplates – will win this cooking game. 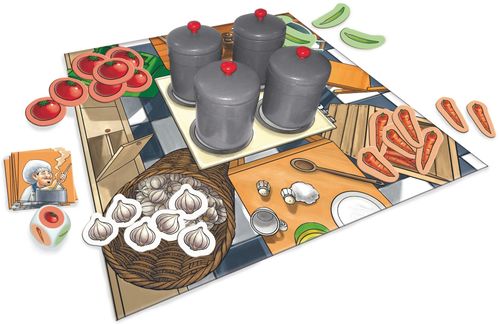 (Disclosure: Queen Games has hired me to edit rules for some of its 2015 releases. —WEM)