On March 12, 2015, Z-Man Games announced that as of that date it had received preorders for 52,000 copies of Pandemic Legacy, its Spiel 2015 release from designers Matt Leacock and Rob Daviau that will debut in ten languages around the world on October 8, 2015.

As chance would have it (or planning — your call), on that same day I was playing Pandemic Legacy with Daviau, Z-Man Games owner Sophie Gravel, and PSI employee Megan Hinterman Kanous in a Raleigh, North Carolina hotel. Kanous was on hand as PSI distributes Z-Man titles to retail accounts such as Target, Barnes & Noble and Amazon.com, and it would be good for her to know what she's marketing to them. Gravel was on hand because she organized the event. Daviau was on hand to lead us through the first few months of the game. I was on hand so that I could write about Pandemic Legacy in this space and share (some of) the experience with all of you. 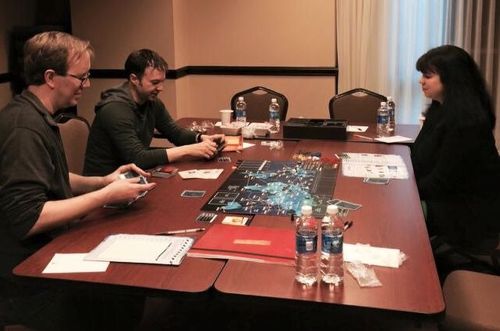 Can you make out anything secret in this pic? No? Okay, publish it.

Pandemic Legacy, for those of you unfamiliar with the game, is a mash-up of Matt Leacock's co-operative game Pandemic, which debuted in 2007 and has blown up over time to have multiple expansions and spinoffs while also serving as a common entry point to modern non-Hasbro games, and Rob Daviau's Risk Legacy, which transformed the decades-old Risk wargame into a quasi-role-playing experience in which the world reflected the actions of the players.

I first posted something about Pandemic Legacy in May 2014, and the concept of the game was clear from the get-go: Take the familiar Pandemic gameplay, and have the results of one game carry over into the next. I had no idea what the details of the game might be, but the concept was juicy with possibility. In July 2014, Z-Man revealed an overview of the game:

Quote:
One year. One team. One hope.

Pandemic Legacy starts what will be one of the worst years in human history. Whether it is the worst year is up to the players, who must band together to save the world. Unlike in Pandemic, actions taken in one game of Pandemic Legacy affect all future games. Characters will change. Some may be lost. Heroes will emerge. And, of course, there are the diseases, which start under control, but soon...

Can you save humanity? Will you be ready for the challenges that await in Pandemic Legacy?
That's the framework for the game. You start in January, and play the Pandemic game pretty much like normal. Heck, if you've never played Pandemic — or have Pandemic virgins at the table — you can use the components of Pandemic Legacy to play (almost) original Pandemic to learn the nature of the gameplay, how to share cards, the pace of the epidemics, and so on. (The gameplay isn't identical due to the Pandemic Legacy game board having more connections between cities, which is important for new elements in this later design.) Once you've got the basics of Pandemic gameplay, you can dive into "one of the worst years in human history". Fun! 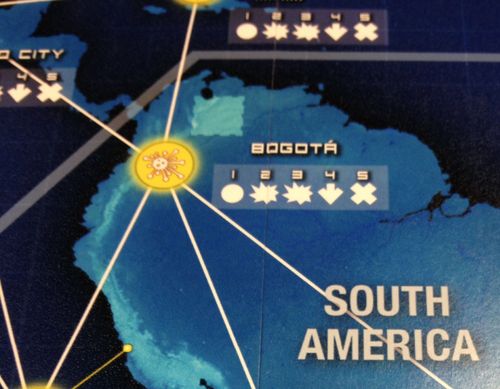 Other parts of the game board look different, too
While the basics of gameplay are familiar, you notice differences right away. Each city on the game board features a chart next to it, and each time an outbreak occurs in a city, you mark the lowest unmarked number. Marking 1 doesn't result in gameplay changes; it merely indicates unrest in the city against the apparently useless medical workers who sometimes pass through. Marking a 2, however, signals the start of rioting in the city against those same medical workers, with flights into and out of the city no longer being allowed. Research stations in the city are destroyed, and no new ones can be built. (Yes, they're acting out against those not responsible for their situation, but I think we can all find one or a dozen examples of the same type of behavior in real life.) Marking a 4 or 5 indicates further levels of devastation in a city, but I'll leave those details a mystery for now, mostly because I don't remember them. 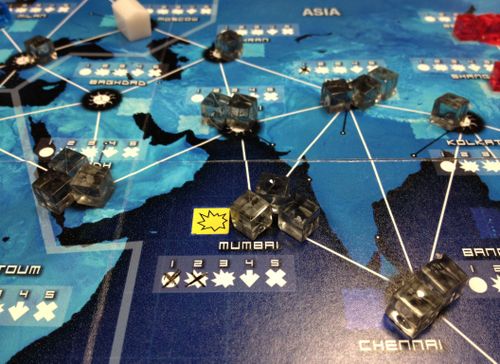 Mumbai proved a trouble spot in January, with Delhi close behind
One other obvious change from Pandemic is the presence of the Legacy deck: a deck of cards that bears a huge warning label as a glance through it might spoil much of what's to come in future games. (The numbers in the bottom corner allow for someone to reorganize the deck should you drop it. Find someone who's not playing to do this!) The top card tells you when to draw it, then you read the back — possibly drawing other cards as well — until you hit the next stop sign, which also has an indication of when you might look at that. Sometimes these cards are helpful, but that doesn't happen often. 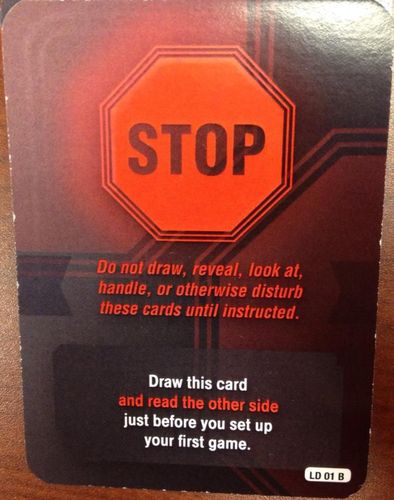 Top card of the Legacy deck; no spoilers!
Pandemic Legacy presents you with a handful of familiar characters, but in this game they are actual characters and not merely roles. You name your character at the start of play, and as the games progress they can be granted upgrades (when you win), scars (when you're in a city that outbreaks), and relationships (which link you to other characters in various ways). Scars are richly thematic, with you perhaps unable to enter the city where you were scarred or paying an additional cost when traveling in certain regions of the world. Collect three scars, though, and you're forcibly retired from the game — because you're dead.

One non-thematic element is that you can choose which scar you take, and some scars are definitely better — as in "less worse" — for some characters than for others. While talking about this, Daviau mentioned that he and Leacock had tested randomly distributed scars but found that players didn't like having a character nuked with a devastating scar. In general, Daviau said that in the design of this game he typically leaned toward storytelling while Leacock leaned toward control — that is, allowing for players to have some measure of control over what happens to them or around them. Thus, count scar distribution as a victory for Leacock. 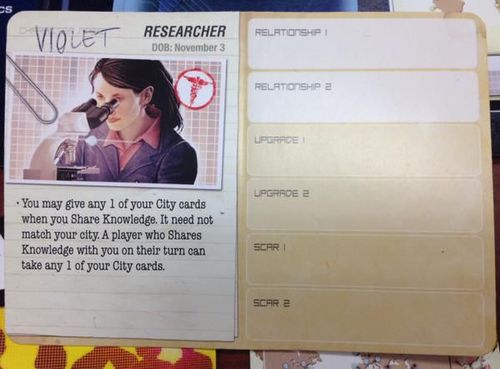 Violet wanted to be a rock star when young, but now she's merely a single moniker researcher
As in Risk Legacy, some of the permanent changes in the game require you to sticker one thing or another, as with rioting Mumbai or scarred Violet (who was indeed scarred in our first game). The game includes a sheet of stickers that show some of the possible rewards and scars and that allow you to tag cities as needed, while other stickers — and other things — are hidden in multiple dossiers that you'll reveal as needed and as directed by the Legacy deck at various times. 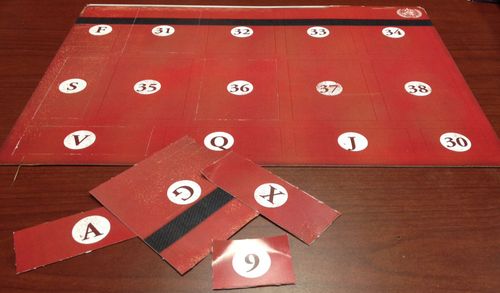 An additional change from Pandemic is that Pandemic Legacy adjusts to your level of success or failure. To start the game, you have a government funding level of 4, which means that you're allowed to add four event cards of your choice (from the eight available) to the location deck before you start play.

In a Leacockian touch of benevolence, you're allowed to see which cubes are in which cities at the start of play before you decide which events to use. If you lose the game, your funding level rises by two for the next game, giving you more events to use and a bit of extra padding between epidemics; if you win, though, your funding drops by two. Get good enough, and you'll have a nice trim deck with zero events in it — well, sort of. One of the possible rewards that you can take for winning a game is an "unfunded event" sticker that you can apply to any location card in the deck. When someone holds that card in the future, the player can use it for the location like normal or use it for the event without spending an action. 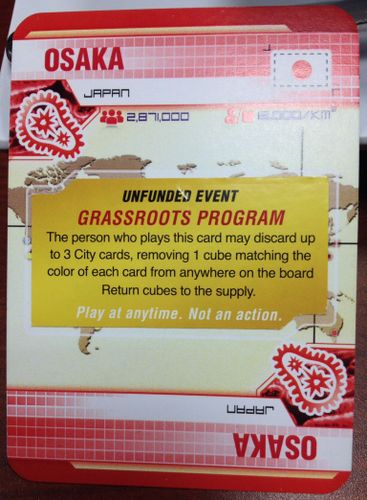 Osaka now has an additional use in the game — well, at least in this game
As in Pandemic itself, sometimes everything goes swimmingly in Pandemic Legacy and sometimes it doesn't. The situation seems stable, or at least nearly enough, then you hit an epidemic card, pull Delhi from the bottom of the deck, then splash more cubes in southern Asia to see outbreaks spring up everywhere. Game #1 seemed relatively in control — until it wasn't.

Things might happen between games, such as your funding being reduced or expanded, but no matter how you do in your second attempt at battling diseases in January — whether good or bad — for your next game you'll move on to February and whatever it entails. I asked Daviau about this, and aside from the thematic nature of time passing he brought up the time-honored excuse of needing to keep the game on the rails.

In short, if you win every game of Pandemic Legacy, you'll play twelve times; if you lose every time, you'll play twenty-four times. Those two numbers place a minimum and maximum on the number of times that certain things happen, which is important for all sorts of events and activities, much of which I didn't see. As Daviau pointed out, if you repeated February a half-dozen times a là Phil Connors, you'd possibly devastate a huge number of cities on the game board, hampering your efforts at ever seeing March, much less the closing months of the year. 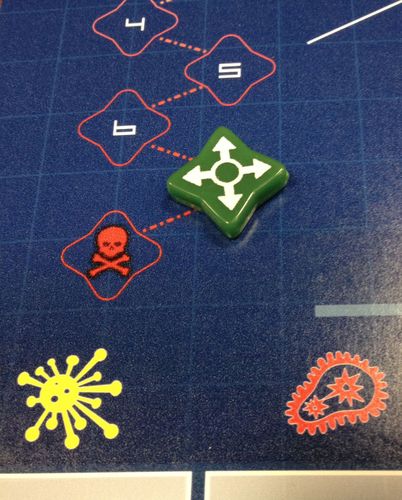 On the verge of defeat
In the end, our group played Pandemic Legacy four times, with the first game loss being our only setback. After the first quarter of the year, I was ready to be made a fool in April, but certain parties — i.e., everyone other than me — had planes to catch, so we had to stop there. Daviau said was a good place to stop anyway — the end of the first act, as it were — and I'll have to take him at his word as I didn't paw through the Legacy deck to see what was coming.

Gravel said that Z-Man Games plans to hold Pandemic Legacy teaser events at Gen Con 2015, with players doing much the same as what we did, going through three months of the year. The game itself is being released October 8, 2015 in all locations at the same time in order to avoid gameplay being spoiled too early, although it's no doubt true that some number of groups will run through everything in the first day and broadcast their games live via YouTube. As for the different box colors, that's simply a marketing effort by Z-Man to allow you to play one game with friends and another with family and not get them mixed up. All of the components will be the same no matter the cover, and we'll just have to wait until Season 2 to find out what other tricks Leacock and Daviau might have for us... 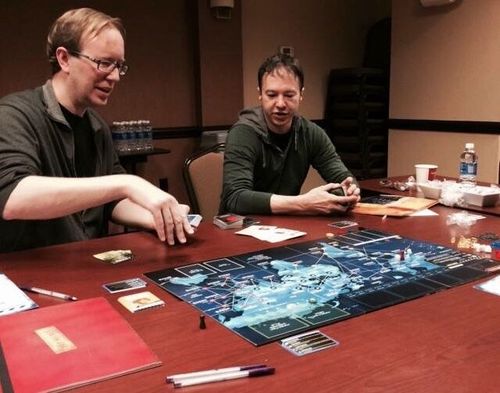 "We can be heroes, just for one day"