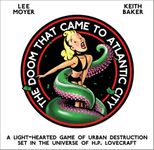 In somewhat surprising news, the U.S. Federal Trade Commission has taken legal action in its first (but probably not last) case involving crowdfunding, with the target of this action being Erik Chevalier, who raised more than $122,000 in 2012 on a Kickstarter project to publish The Doom That Came To Atlantic City under the publishing name The Forking Path Co.

In a press release about the action, the FTC notes that Chevalier spent most of the money on personal expenses, leaving backers of the KS project with nothing but excuses. Here's an excerpt from that press release:

Quote:
According to the FTC's complaint, Chevalier represented in his Doom campaign on Kickstarter.com that if he raised $35,000, backers would get certain rewards, such as a copy of the game or specially designed pewter game figurines. He raised more than $122,000 from 1,246 backers, most of whom pledged $75 or more in the hopes of getting the highly prized figurines. He represented in a number of updates that he was making progress on the game. But after 14 months, Chevalier announced that he was cancelling the project and refunding his backers' money.

Despite Chevalier's promises he did not provide the rewards, nor did he provide refunds to his backers. In fact, according to the FTC's complaint, Chevalier spent most of the money on unrelated personal expenses such as rent, moving himself to Oregon, personal equipment, and licenses for a different project.

Under the settlement order, Chevalier is prohibited from making misrepresentations about any crowdfunding campaign and from failing to honor stated refund policies. He is also barred from disclosing or otherwise benefiting from customers' personal information, and failing to dispose of such information properly. The order imposes a $111,793.71 judgment that will be suspended due to Chevalier's inability to pay. The full amount will become due immediately if he is found to have misrepresented his financial condition.
I'm always tickled to read about games when they're presented in something mainstream like a government press release: "highly prized figurines" indeed.

It's a shame that backers won't receive a refund — although Cryptozoic Entertainment did make good on the promise of a game by producing and delivering The Doom That Came To Atlantic City to more than 1,200 backers in mid-2013 — but if nothing else, this FTC announcement might give a cheer to backers of other failed Kickstarter campaigns.