Codenames From CGE Going Digital? Maybe!
My most anticipated game of the entire Gen Con crop is probably Vlaada Chvátil's brand new Codenames. I've already ordered a copy, and expect to pick it up at the Con. While Czech Games Edition will have a few copies of Codenames at Gen Con, it's official US release isn't until later in the year. That's where things get interesting.

I was scanning through my subscriptions when I came upon this gem from CGE bigwig, Petr Murmak:

Petr Murmak wrote:
But official app is in the development and will be out before official US release.
Wait, what's this now? You're supposed to be working on Through the Ages: A Story of Civilization! I'm so confused!

I haven't heard anything from the guys at CGE about this yet, so they're playing it close to the vest.

We're hoping to meet up with CGE at Gen Con, so hopefully we'll have an answer for you in just over a week.

New Screenshots for Steam Pull Into the Station
Mayfair Games is close to bringing Martin Wallace's classic Steam to iOS and Android. Last week they announced that the beta was nearly underway, and today they sent me a load of new screenshots. I don't have a lot to say, other than it's really looking fantastic.

Take a look, and enjoy! 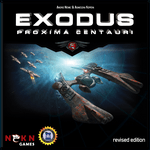 One other thing we know is that a board game companion app is also on the table and should be released on iOS in September.

We'll see what else we can dig up and let you know as soon as we have something.

Space Food Truck is a cooperative game in which up to four players each take a different role in the ship: Chef, Captain, Engineer, and Scientist. Each role has its own deck of cards that you'll add to over the course of the game. The goal is to travel the galaxy searching for ingredients to make a dish and then deliver it to the planet that demands that recipe. This all needs to be done before the ship explodes, as food trucks are wont to do.

The Kickstarter is about $25K short of its goal with only 14 days to go. The game is nearly completed, but the Kickstarter will help to add "polish" to the game. Music, sound effects, and online multiplayer.

Originally, the game was only to be for PC/Mac, but this week they announced that iPad and Android tablets were also target platforms.

Head over to the Kickstarter and check out all the game info over there. I've also included an alpha gameplay video below.

We don't know much at this point, other than it will be dark. Warhammer dark, if that's a thing. Oh, and it's coming in 2016 to PC/Mac. No mention of a mobile version, but, hey, we're open-minded here! Check out the trailer and wonder why you just spent 30 seconds watching it, and if that guy's voice is really that deep.

Pirates War Now on Kickstarter
Pirates King is an original game being created for iOS, Android, and Steam. It mixes board game tropes with a CCG and is currently on Kickstarter.

Sadly, it's a roll-and-move game but it looks like it has a bit of polish and maybe won't suck?

Check out the Kickstarter and see what they're offering. They have the guts to start their trailer with "In a world...", so I'm willing to at least give them a look. 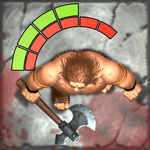 Quest Heroes Looking to Satisfy the Dungeon Crawl Itch
Quest Heroes is a big game from a small developer. In fact, from what I can tell, it's a three-man operation. Basically, they love the old school dungeon crawls but found games like Warhammer Quest and Hunters 2 weren't tripping their triggers. So, they decided to make their own dungeon crawl with a definite WHQ vibe.

Quest Heroes is a top-down, party-based dungeon crawler but it hews closer to a board game than the digital version of WHQ from Rodeo Games did. Sounds like a good time for a blurb:

Quest Heroes wrote:
-A rule set totally compatible with real life board-gaming. We will release a free print-and-play version at some point of the development process.
-A not-so-serious medieval fantasy world in which, for instance, the mayors are exploiting zombies to clean out their sewers and sending adventurers to teach them a lesson when they go on strike (even the dead feel entitled to at least one day off per week).
-You manage a pool of heroes: before each quest, you select the members of the party.
-Ultimate party-building freedom. If you'd rather have an adventuring party made up of three wizards and a thief instead of the traditional warrior-archer-dwarf-wizard combo, then go for it! It's totally up to you.
-No frustrating class-based gear limitations. Characters can equip and use any weapon or equipment as soon as they have the required stats, regardless of their class.
-Permadeath. However, there are resurrection scrolls (extremely rare, and usable only right after the death) and you can pick up a dead character's gear, so nothing is ever completely lost.
-Heaps of magic, monsters, missions, skills and items... indeed.
-Randomly generated quests.
-Special rooms with their special tricks, traps, rules and puzzles.
-Monster's AI using different kind of group-strategies depending on the situation, and a different individual AI for each kind of monster/foe.
-And of course bosses, traps, secret passages, different environments, multiple victory conditions...
Sounds pretty cool. The screenshots look pretty cool, too, but I've got you one better and have a little gameplay video ready to roll. Oh, and don't keep turning up your volume, the video has no sound. Yet. From what I gather, they're working on it. Quest Heroes is planned for PC, Mac, iOS and Android but they haven't announced a release date yet.

Anyway, it looks pretty cool and who doesn't love a good dungeon crawl?