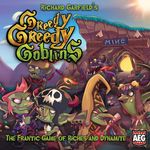 • Alderac Entertainment Group has released details of three forthcoming titles, with one of them being Richard Garfield's second goblin-related title in a row, the first being Treasure Hunter from Queen Games. AEG's Greedy, Greedy Goblins, due out Q2 2016, is a tile-placement and bluffing game in which the goblin players compete simultaneously, digging through the mines to find treasures and claim them before anyone else can. In more detail:

Quote:
Players lead a clan of goblin miners who want to gather the most valuable collection of gems. Coins are scored for gem tiles on the mines you have claimed, with bonuses for dynamite tiles — but if there is too much dynamite, the mine (and all the riches within) are destroyed!

In more detail, players sit around a circle composed of cave game boards and the guildhall game board, with sixty mining tiles placed face-down within this circle. Each round, while playing at the same time, players use one hand to look at one mining tile at a time, then place it on one of the cave game boards. At any time, a player can claim the guildhall or a cave by placing one of their three goblins on the board, after which no more tiles or goblins may be placed on this board.

Once everyone has placed all of their goblins (or decided not to place them), players resolve the boards. The goblin on the guildhall draws a minion card that provides a special ability, while each goblin in a cave scores coins based on the gems, diamonds, dynamite and monsters found there; these goblins can also take minion cards if minion tiles have been placed in the cave. Dynamite multiplies the value of a cave, but three or more sticks blows the place up, costing you coins.

If someone has one hundred or more coins, the game ends and whoever has the most coins wins; if not, set up another round and go digging again. 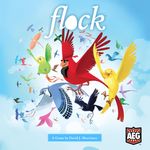 • David Mortimer's Flock, due out by the end of 2015, uses the natural tendencies of birds to his advantage, with a game based on nesting, hatching and feeding and players taking those actions collectively when one player chooses to do so — that is, one bird flies, the rest of the flock takes off as well. Here's a more detailed explanation:

Quote:
Players start with three of their eleven birds in front of them. Six nest, egg and worm tokens are placed on the side for each player. On a turn, a player can either place a bird on one of the six action cards or activate an action card on which they have at least one bird. When you activate an action card, you can remove birds from the card — possibly paying worms, nests and eggs as well — to take the action shown, such as removing two birds from "Feeding" to get three worms. Spent birds are returned to your personal pool of resources, while other spent resources are placed on the side. Each player in turn order does the same with this action, then whether they used their birds or not, all birds are removed from this action card, flying away to the players' personal pools.

When the "Dominance" card is activated, the dominant player adjusts their pecking order on the initiative track, then everyone else flies their birds from that card to the other action cards. When "Competition" is activated, which is possible only when enough birds have landed on it, each player spends a nest and worm for each of their birds (removing them if this isn't possible), then flies their birds to other action cards. Players then score points for having the most or secondmost birds on a card and for the birds left in their pool.

After three rounds, the player with the most points wins! 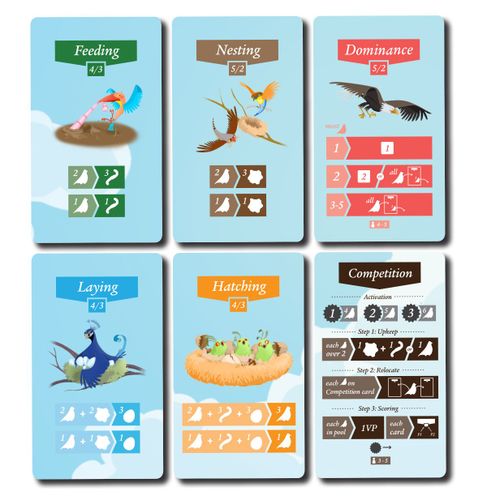 • The third AEG release, also due out in 2016, is Isaac Shalev's Ravenous River, which is reminiscent of those logic puzzles of old in which you need to get animals across the river, but you must do so in such a way that no animal will eat another in the process. In this game, however, you want to eat animals and not be eaten in turn, but you don't know which player is which animal until the boats are loaded. Here's a summary of the game:

Quote:
In Ravenous River, each player takes the role of an animal trying to cross the river. The roles are hidden, so you don't know which players are predator or prey. Be careful not to end up on a boat with the wrong animal, or you'll end up as its lunch! Use your feral cunning to trap your prey on the same boat for a tasty treat while you cross the river. The player who scores the most points by crossing the river, eating their prey, and avoiding being eaten themselves wins!

In more detail, Ravenous River includes seven animals, with each animal (e.g., horse) having a predator (bull) and a prey (hound). At the start of each round, each player secretly receives an animal card, and they want to feed that animal and get it safely home. Shuffle seven animal cards, then place them face down in a row on the riverbank. Place two boat cards near this bank; each boat can hold at most two animals. Deal each player two action cards. On a turn, a player either:

• Places an animal: The player looks at animal card, then either places it face up on a boat or discards an action card and places it face down on the riverbank again.

• Moves an animal: The player discards an action card, then either moves an animal from a boat to the bank or from the bank to a boat.

If a player has no cards in hand at the end of their turn and both boats are full, players simultaneously vote on whether to end the round or not. If they do end it, players first see who eats whom on the riverbank, then who eats whom on each boat, then they unload the animals at home on the far side of the river, then again see who eats whom. Each animal scores 1 victory point (VP) for each animal eaten, unless it was eaten in turn in which case the point passes to its predator. Surviving animals score 1 VP on the bank and 2 VP at home.