Asmodee Acquires English-Language Rights to Catan; Mayfair Games to Continue on Its Own 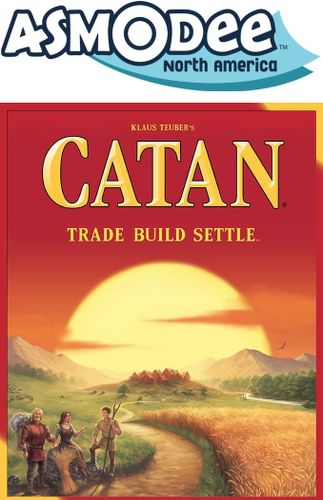 Since Asmodee's acquisitions of Days of Wonder and Fantasy Flight Games in 2014 (covered here and here), many people have joked about what Asmodee will acquire next.

Today we have that answer: Catan — more specifically, "worldwide English-language publishing, commercial and brand rights to Catan", with Asmodee acquiring those rights from U.S. publisher Mayfair Games. (Steve Horvath, CMO at Asmodee North America (ANA), has stated to me that this deal does not affect the license for Catan in any other language or with any other publisher.) Mayfair Games will continue to distribute Catan during an as-yet-publicly-undefined transitional period, after which Asmodee North America (ANA) will take over distribution of Catan within the U.S. while its partners will handle distribution outside of that country.

The English-language rights to Catan will be handled by the newly created Catan Studio, which Asmodee North America describes as an "independent, flexible and creative unit within the Asmodee Group [that] is dedicated to the development of a broad array of Catan content as well as growing, supporting, and nurturing the Catan community". To quote from the press release: "Led by Peter C. Fenlon, former CEO of Mayfair Games, this experienced and talented studio team will work closely with Catan GmbH and their partners to grow a vibrant global brand." (Catan GmbH, based in Germany, "specializes in the development and licensing of entertainment concepts", with Catan designer Klaus Teuber and his sons Guido and Benjamin Teuber all serving as Managing Directors.)

Why does the Asmodee Group want to acquire the rights to Catan? For anyone familiar with modern games, the answer should be obvious, but let's quote from the press release to put some numbers into the conversation:

Quote:
The award-winning Catan board game, invented in 1995 by Klaus Teuber, has sold more than 23 million copies (including expansions) and is translated into 35 languages. For 20 years, this game has been bringing modernity to the classic gameplays through developing innovative game experiences and social interactions. This long-lasting success enables Catan to be recognized as an internationally established brand, with English-language today representing over 50% of the worldwide yearly sales.

In line with the recent acquisitions of Dobble/Spot-It! and the board game publishers Days of Wonder and Fantasy Flight Games, this acquisition is a principal part of Asmodee's strategy of expanding its intellectual property portfolio and international presence to continuously offer the most innovative and leading games to the international gaming community and broaden access to games to the largest possible audience. Over the last two years, the Asmodee Group has accelerated its international growth, now representing 67% of the group sales (of which more than 30% in the US), versus 48% in 2013. 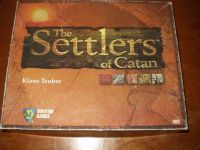 Mayfair's first edition
To get a better understanding of how this deal came about, I asked Peter Fenlon, now CEO of Catan Studio, about Catan's standing within Mayfair Games, specifically whether a Catan team operated independently within Mayfair or whether it was integrated with all other aspects of the company. "Catan was the best-selling brand in the Mayfair portfolio, but it didn't become especially distinct until 2007", he wrote. "It was then that I took over as CEO; we reorganized, Larry Roznai [currently Mayfair's President and COO], Bob Carty [Vice President of Sales and Marketing], and Coleman Charlton [game developer and editor] became empowered, and we refocused. Soon, we released the fourth English-language edition and began devoting dedicated resources and programs to Catan brand development. The brand gradually took off, and we remained focused on its success. Our Virginia-based game development team, our Florida-based sales and marketing staff, and our Illinois-based operations crew all came to understand Catan's special standing and value. Everyone helped build the brand as they labored to strengthen Mayfair. Nonetheless, Catan was never fully independent."

As for how Catan came to be part of the Asmodee Group and who approached whom, Fenlon wrote: "Many larger firms sought Catan, especially in recent years. All made multiple inquiries. Many friends sought us out. Still, we felt the brand needed careful and steady development, for we always felt Catan could become an enduring global brand. We believed that it would ultimately become the world's preeminent analog game brand. Once we focused on Catan, that became even more evident. It also became clear that a traditional toy company or brand development house, despite great resources, might not understand Catan's special value. They might not act with the patience and care necessary to build and nurture Catan's great community. Nor would they understand the need to treat it as a 'premium brand', not just a mass market fad."

He continued: "Stéphane Carville, Asmodee's CEO, understood these challenges. He approached us in 2014, learned what we wanted, and came back to us last spring [2015] with a very creative and serious offer. His mission to build the world's strongest 'game company' — as opposed to toy company — excited us. With an opening from our mutual friend, Luc Mertens, Stéphane flew to Charlottesville, Virginia on short notice in late spring 2015. There, he sold Coleman Charlton (Mayfair's Product Director) and I on his vision. His vision complemented and underpinned ours. Soon, our other partners at Mayfair (Larry, Bob et al) and Catan GmbH bought into the proposal."

In a separate press release, Mayfair Games (MGI) noted that Larry Roznai will remain as President while also assuming the CEO position held by Fenlon, while Alex Yeager will become Vice President of Acquisition and Development to handle the former responsibilities of Charlton. In addition to distributing Catan during its transition to ANA, Mayfair Games will continue to promote "the Catan brand including but not limited to the continued coordination of the 2016 Catan tournament schedule, Catan Day 2016 and the 2016 Catan World Championship". To add more details from the Mayfair press release:

Quote:
MGI continues to retain a controlling interest in Lookout GmbH and Mayfair GmbH, providing a wide range of games worldwide, and distribution to the European marketplace. These efforts will be expanded with a new focus on multi-language and international products.

MGI is also pleased to announce the acquisition of several Martin Wallace games as permanent additions to the Mayfair game library. Those titles include Steam, Aeroplanes, Automobile, Test of Fire and Clash of Wills.
More from Fenlon about why Catan is leaving Mayfair Games: "Asmodee could never have sold us on the idea of joining Catan to their portfolio if we didn't believe that: (1) they were a content-driven company determined to create and support truly great games; (2) they understood and supported the diverse and growing game community; (3) they understood that event- and story-based marketing need not be cynical, and in fact should offer its own substantive entertainment value; (4) they embraced all levels of the game community and game trade as game consumers; (5) they understood that service-oriented brick-and-mortar retailers had a special value as forums, community centers, etc.; and (6) that each game, each line, each brand offered unique value. This balanced perspective, this diverse perspective, this commitment to great content is a very healthy philosophy. It will help us build and support a healthier and happier game community — and thus market."

As for what will change with Catan as a result of this deal, Fenlon stressed that people will continue to see all that they've seen in the past, but in all likelihood more people will be seeing it: "The Asmodee Group provides Catan with a host of additional resources. In addition to the capital necessary to carefully and deliberately grow the Catan content portfolio and reach new markets in a steady, deliberate, and fair fashion, Asmodee offers Catan access to a strong, diverse, and global operations program and a very talented international team. While we will operate as an independent studio, we'll be able to tap into a lot of new perspectives, thoughtful experiences, and diverse perspectives. Most importantly, we'll be part of a group that understands that we need to think globally and act locally." (As mentioned above, Asmodee North America will take over distribution of Catan at some point. Mayfair Games currently has an exclusive distribution deal with Alliance Game Distributors. I asked whether distribution will expand to ANA's five authorized U.S. distributors, as detailed in this BGG News post, and Horvath said that no distribution details are being made public during the transition period.)

As for the look of the game itself, Mayfair Games has historically done its own thing regarding the Catan games, whereas many of the other licensees have adopted the look and design of the KOSMOS edition, but with the local language replacing the German text. Will this practice continue with the formation of Catan Studio? Wrote Fenlon: "First, please understand that, especially in recent years, Catan GmbH, Mayfair, and Kosmos have worked as a team to develop the Catan brand and its products. Mayfair and Kosmos varied components and presentation to suit their markets. As we developed the latest 'global' edition of Catan — the fifth English-language edition — we worked to improve and synergize the brand. This team approach will continue and no doubt improve as we move forward. All partners within the Catan family should participate more, not less. Like the whole Catan team, Catan Studios' approach to product creation, manufacturing, etc. will remain rooted in the idea that we won't make any change unless it is a substantive improvement. We will also remain committed to the fact that Catan is a values-based brand. Those values — curiosity, cooperation through trade, indirect competition, creative building, and fun — are anything but destructive. We'll never manufacture in a way that harms our environment or the people that labor within it." (Mayfair Games currently manufactures its titles within the U.S.)

Fenlon added: "Catan Studio carries Mayfair's entire mandate, especially content, into the Asmodee Group. In fact, our mandate grows. We'll be working with Catan GmbH, our fellow Catan licensees like Kosmos and USM, to carefully create a host of great new game, merchandise, and story programs. We'll continue to support the Catan World Championship, other tournaments, the Big Game, and other event-based programs that are as much fun products as they are entertaining marketing. There will be new games, scenarios, variants, and special editions, but we'll continue to take great care to avoid diluting the Catan experience. Every Catan game, every product, every event should be substantively fun and worthy."