• With only two weeks to go until the Spielwarenmesse toy fair opens in Nürnberg, Germany, I've added many more titles to BGG's Nürnberg/New York 2016 Preview, including a vast line-up from KOSMOS. New Catan releases are on that list, of course, but they're more "new" than new, with one item being Catan: Das Duell, a revamped 20th anniversary edition of the Catan two-player card game, now with four card holders to keep your table more organized.

In 2015, Dutch publisher 999 Games released Catan: Big Box, a collection that packaged the Catan base game with the Traders & Barbarians expansion and other items. Now KOSMOS has a Catan: Big Box of its own that features a different assortment of items: Helpers, Frenemies, the Mallorca Deutschland scenarios (with the former having a paper board and the latter chip board), and the 5/6-player extension. Maybe every country will get its own version of a Catan: Big Box given enough time. It's confusing these days...

• Aside from the Catan packages, designer Klaus Teuber has a new title coming in 2016, Schmuggler, designed with son Benjamin Teuber. The picture helps a lot in making sense of the description, but I think the video overview we record at Spielwarenmesse 2016 will be an even better demonstration. For now, we have this:

Quote:
To bring the best youngsters into the business, the smuggler boss is holding a contest, with the candidates being challenged to move a sack filled with contraband through an opening in the fence.

More specifically, in Schmuggler players form the "sacks" used for smuggling out of modeling clay and hide their contraband within. The sacks are then rolled down a 3D path, with a die roll determining which hole in the fence the player needs to try to squeeze through. The player whose bag fits through the hole and who has the largest sack now checks the smaller bags, possibly taking the contraband hidden within. Who will prove to be the best smuggler? 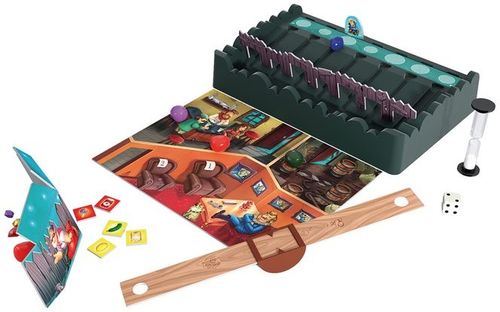 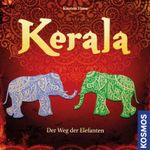 • In the abstract strategy category (I think), KOSMOS has Kerala: Der Weg der Elefanten from Kirsten Hiese, and as with the game above, the description provided by the publisher only hints at what one actually does in the game:

Quote:
Welcome to the elephant festival in the Indian province of Kerala! Colorfully decorated elephants roam everywhere, and naturally players want to participate and make the most magnificent fairground with as many elephants as possible.

In Kerala: Der Weg der Elefanten, each player wants to take at least one tile of each color, and all tiles of one color should be joined together, but of course the players are constantly getting in the way of one another and grabbing the tiles that someone else wants. 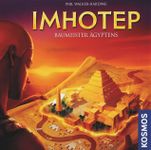 • In addition to having an expansion for Cacao coming from ABACUSSPIELE, designer Phil Walker-Harding has the 2-4 player Imhotep due from KOSMOS in March 2016. Looks big and blocky!

Quote:
In Imhotep, the players become builders in Egypt who want to emulate the first and best-known architect there, namely Imhotep.

Over six rounds, they move wooden stones by boat to create five seminal monuments, and on a turn, a player chooses one of four actions: Procure new stones, load stones on a boat, bring a boat to a monument, or play an action card. While this sounds easy, naturally the other players constantly thwart your building plans by carrying out plans of their own. Only those with the best timing — and the stones to back up their plans — will prove to be Egypt's best builder. 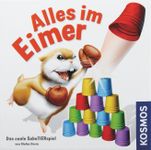 • If you had asked me months ago whether a game would feature a hamster punching a bucket, I likely would have said no, but thankfully I didn't place any money behind that statement as KOSMOS is re-releasing Stefan Dorra's Alles im Eimer. This design was first released by KOSMOS in 2002, then upgraded by Hong Kong-based Jolly Thinkers to make the physical element more important for gameplay, and now it's headed back to Germany. As for the gameplay, here's an overview:

Quote:
In Bucket King 3D, players lay down sets of animal cards to try to knock over every other's pyramids of buckets. Cards in hand can be used to defend your own buckets and attack those of others — and if you knock out a bucket low in someone's pyramid, you might cause a cascade that takes out even more!

Each turn, the active player either plays cards or loses buckets; the game is played in rounds with a new round starting after anyone loses one or more buckets. At the start of each round, the active player chooses 1-3 cards in hand of the same color/animal, lays them face up in front of himself, announces their sum, then draws one card to add to his hand (regardless of how many he played). Each subsequent player must lay down 1-3 cards of the same suit as the initial player with a higher sum than previously announced or else lose a bucket. (If play circles the table to the round's start player, he can add 1-3 new cards to those previously played, then announce the sum of all cards in front of him.) 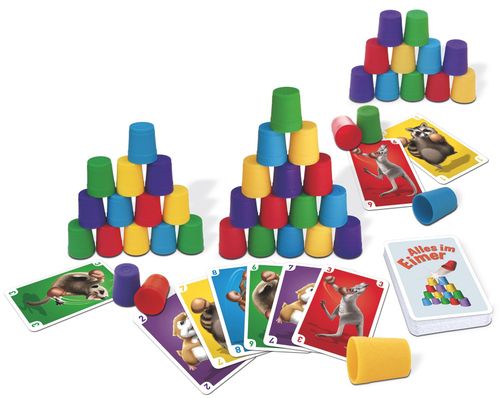