New Game Round-up: Stefan Feld Consults the Oracle, Aaron Haag Scores an A, and Faidutti and Lang Want to See Your Hands

• Game developer/publisher Ralph Bruhn of Hall Games has dropped details of Stefan Feld's next big new release, The Oracle of Delphi, with Bruhn noting that the title is intended for an October 2016 release. Here's the description:

Quote:
"For once, Zeus, Greek god of thunder and sky, is in high spirits. Hence, he decides to offer a generous gift to a worthy mortal and invite him, or her, to his realm, to Olympus. To determine a sufficient candidate, Zeus hosts a competition for his entertainment. Twelve legendary tasks are imposed upon the fearless participants: to erect graceful statues, to raise awe-inspiring sanctuaries, to offer capacious offerings, and to slay the most fearsome monsters. The first participant to master all the posed assignments wins the favor of the father of the gods himself.

Indubitably, you will not pass up this golden opportunity, so you clear your ship and rally your crew to follow on the trails of legendary Odysseus through the dangerous waters of the Aegean. But how could you find the righteous path onward? There is but one who can help you. Visit the mysterious oracle of Delphi and let her answers guide your ways.

In The Oracle of Delphi, the player's ships travel across a large variable game board of hexagonal tiles showing islands and the surrounding waters. Each player aims to reach certain islands to perform the twelve tasks given by Zeus: e.g., to collect offerings of different colors and to deliver them to corresponding temples, or to slay monsters of a specific type (and color), all of which can be discovered on the islands.

In order to execute these color-dependent actions, you are given three colored dice each turn, the so-called "oracle dice". Rolling the dice (at the start of the turn) is equivalent to consulting the oracle, whereas the results represent her answers. The answers determine which actions you will be able to take, but you will always have three actions per turn. However, a slight divergence from your fate is often possible.

In addition to the oracle, you can request support from the gods and you can acquire favor tokens, companions, and other special abilities that will help you win the race against other competitors. 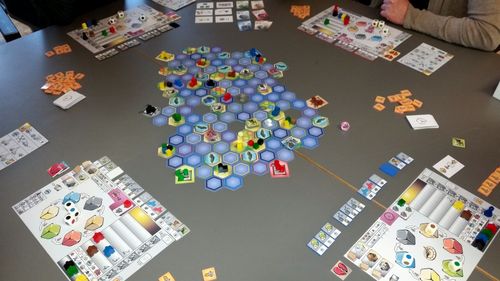 • I recall linking to a fascinating post by Bruno Faidutti from 2014 in which he reported on how gamer behavior changed based on the method in which players took actions — then I looked through old BGGN posts and apparently I only thought that I linked to it. Sigh.

In short, Faidutti was working on a prisoner's dilemma-style game with Eric M. Lang. Each turn, a pair of players would have two cards placed in front of them, then these players would simultaneously choose Mine, One, or All, that is, the two cards in front of me, any single card, or all the cards on the table. Faidutti ran tests of the game in which players made their choice with dials, with cards, and with their fists, and he noted the following about the latter method:

Quote:
Theoretically, this system is equivalent to the two former ones. When playing, however, the feeling is very different, and it seems that the results are slightly more aggressive, with more wars and less peace. Maybe holding one's arm makes one aggressive, maybe the requirement to play fast, without hesitation, makes us less careful? Anyway, it's the same game, but it plays a bit differently.
That game, titled Neeed! at one point, will be released in 2016 by Lui-même as Dolores, with the 2-4 player pirates trying to collect seven types of treasure, but scoring at the end of the game only for the types that they have the most of and the least of.

I played the prototype once with Faidutti and others at Spiel, and as is often the case with his games, you're trying to climb inside someone else's head to figure out what best to do. The gameplay is simple and intuitive, yet that doesn't make the choices easy. Sometimes you'll both want war, so that you butt heads and no one gets anything, but then you realize that making peace would mess up that player's plans — yet they might make peace, too...

• Didn't I just cover a Peer Sylvester title yesterday? Yes, I did, but here's another one coming from him: North American Railways, a 3-5 player card game that Spielworxx expects to release in July 2016. The available info so far is brief: "Players become directors of up to five different companies and try to acquire a majority of shares. In the end, the player with the most cash wins." Spielworxx notes that this title will be released in an edition of 500-600 copies.

The rest of Spielworxx's line-up for 2016 is Solarius Mission from Andreas Odendahl and Mike Keller in July, Sands of Time from Jeff Warrender in October, and Reformation (which is a working title) from Jason Matthews and Chris Leonhard in October.

• A bit of information is available for Argentum Verlag's late 2016 release: Saami from Aaron Haag, and that has to be a record for the number of "a"s in one phrase. Here's all I know so far: "Saami is a semi-cooperative game in which players need to eliminate threats while trying to improve their own personal position in the game." 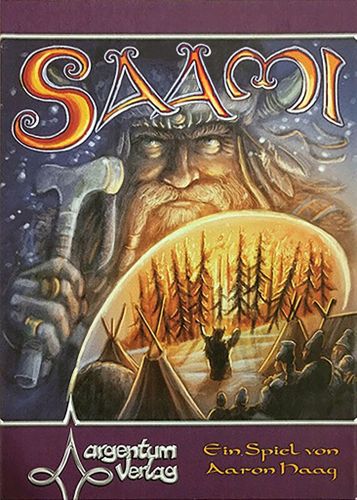