I have failed in my attempt to create a convention preview for the Tokyo Game Market on December 11, 2016, starting the list in late October following SPIEL 2016 but then getting busy with coverage of that convention and other things. That said, I have added a few titles to the TGM Preview — and to the BGG database in general — so let's look at them:

• The designers at Saien, a.k.a., Team Saien, have what they described to me at TGM in May 2016 as a somewhat more intricate and involved Abluxxen — and given my love of Abluxxen — I was intrigued. We played a couple of rounds on the prototype at TGM, and it was like learning Abluxxen all over again as I had no concept of what I was doing and which cards were going where and what I might be playing into and how to close the deal when I had only a few cards left in hand. In short, I loved it and am bummed to be missing out on TGM this time, but them's the breaks.

In any case, here's a rough overview of the gameplay in ReCURRRing:

Quote:
In ReCURRRing, players try to get rid of cards in hand. The deck consists of 57 cards: one 1, two 2s, etc. up to nine 9s, along with a dozen Rs; with fewer then five players, some of these cards are removed from play. A 1 is the strongest single card, but any pair beats a single with two 2s being the highest pair; Rs are the weakest cards.

After dealing out the deck, the starting player lays out a single card. The next player can pass (in which case they're out for the remainder of the round) or they can play one or two cards that rank higher than what was played; if they do, they take the previously played card(s) in hand. Each subsequent player can either pass or play a higher set of cards of cards, but a set that includes at most one card more than what was played most recently. Once all players pass, the cards in the center are removed from play, and whoever played most recently leads in the new round.

When a player runs out of cards, the round ends. Players play multiple rounds until a player reaches the target score. 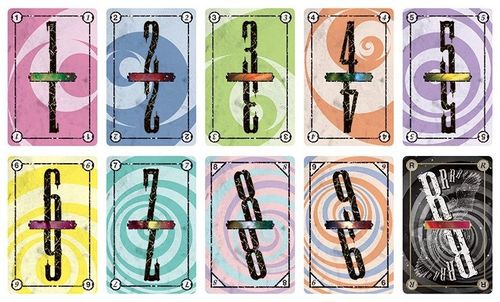 • Speaking of Saien, an older game of theirs — Dazzle — will be published in a new edition in Q2/Q3 2017 by Pegasus Spiele, which in 2016 republished Saien's Khmer as Elements. In the two-player game Dazzle, players each receive a deck of 18 cards, with the cards each having value 1-3 in one of four suits. On a turn, a player picks two cards from their hand and shows them to their opponent. The opponent keeps one of these cards for themself, while the other cards is placed in a points pile for that suit. When players run out of cards in their decks — and not all cards are used in each game — whoever has the highest score in a suit collects all of the points for that suit. Whoever has the highest score wins.

• Not reading Japanese doesn't stop me from gamely trying to figure out what might be going on in a design, as with Tokyo Highway from designers Naotaka Shimamoto and Yoshiaki Tomioka and their new publishing brand itten. Here's what I've got:

Quote:
In Tokyo Highway, players compete to place all of their cars on the road — but to do that they will first have to build the roadways!

Over the course of the game, players will construct columns of varying heights by using the 66 squat cylinders in the box, then connect those columns with sticks that serve as roadways, with the columns not necessarily being the same height when connected. Once you have a highway, you can possibly place one of your ten cars on it.

• Wind the Film! from designer Saashi of publisher Saashi & Saashi has chosen a great base on which to build a game, something specific to history that I can't recall seeing used before, yet also something that ties together well with the mechanisms of the game — at least as far as I can tell given what I've been able to figure out. Here are the basics:

Quote:
Time to walk about town and take some pictures! It's the 1960s in Japan, and you have a half-size camera that lets you take half-size vertical pictures. Let's see whether you can put together good shots...

In Wind the Film!, you're trying to organize pictures on your roll so that they appear in the right order. Each player has a hand of cards, and on a turn, you'll add 1-3 cards to the front of your hand (without changing their order), move one card in your hand closer to the front, then discard as many cards from the back of your hand as the number of cards that you added. When the sunset card comes out, you can take no more pictures, and everyone scores for what's on their camera.

The cards all have numbers and colors on them, and you try to line them up in hand to score the most points possible. 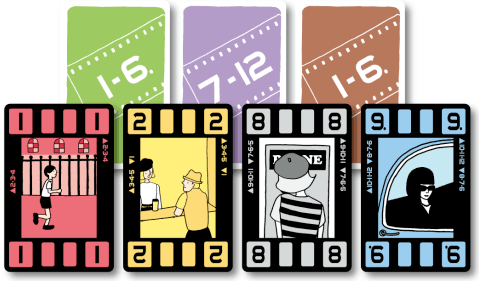 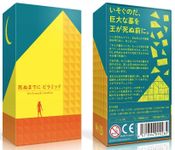 • Given the release of Insider at SPIEL 2016, I hadn't expected another title from Oink Games in time for TGM, but Oink's own Jun Sasaki has delivered The Pyramid's Deadline, which like every other title in this section has an abbreviated description:

Quote:
In ancient Egypt, the king has ordered architects to his side. "Construct a glorious tomb for this eagle, and I will give a reward to whoever has created the largest tomb. Fail to complete the tomb by the time that the eagle dies, however, and it's the death penalty for you on the spot."

Your challenge in The Pyramid's Deadline is to create a tomb larger than any other player's without getting so greedy that you'll be rewarded with death instead. This game combines puzzles, bargaining, and pieces rolled on die that you'll use to build pyramids. 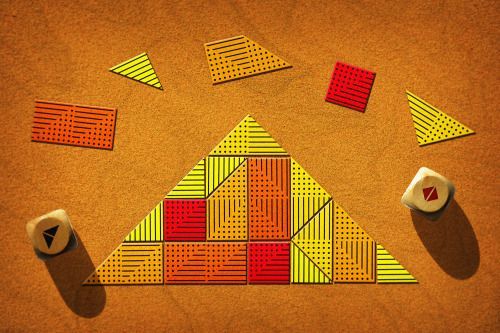