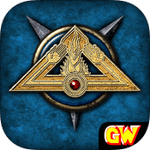 Talisman: Digital Edition Expanding with Firelands
It's been a few weeks since we've heard from Nomad Games Ltd (II), which means they're way behind on new Talisman: Digital Edition expansions. Seriously, it seems like we get one every week or so, and this week is no exception. Unlike small character add-ons, however, this is a full-blown expansion. Well, a small-box expansion, but a real expansion nonetheless.

The new expansion is Firelands, and it brings the usual cadre of new adventurers (four of them, to be exact) and endings (three of those), but it also introduces terrain cards which allow you to change the spaces on the board. Pretty cool, eh? Here's the blurb:

Nomad Games wrote:
Those who forged the Crown have returned!

Great treasure and great peril arise from the burning depths. The Ifrit have risen from their underground kingdom to consume all the land in flaming death. They will not stop until every field is burned to ash and every surface dweller is clapped in chains of brass and taken down to the flaming caverns below.

Will you be able to extinguish the flame?
The Firelands expansion is available right now for the PC/Mac and Android version of Talisman, and should be arriving on the iOS version as soon as it gets through the guarded gates in Cupertino. Not sure of the price, but it is available via IAP. To celebrate, Talisman is 70% off on all platforms right now as well. If you still don't own Talisman, now's the time to pick it up.

Asmodee Releases Image of Upcoming Titles: Onirim, Vampire, Mage
We heard several Gen Cons ago that F2Z Digital Media Inc. was bringing the clever little dream game, Onirim to digital. Since then we haven't heard much and, to be honest, we still haven't. That said, in Asmodee's latest digital newsletter we saw this: 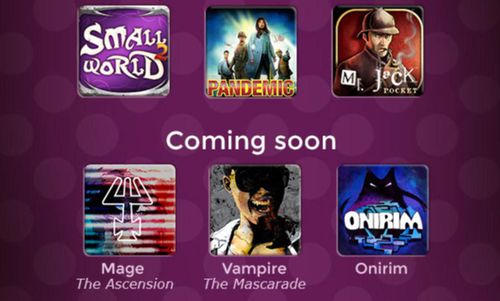 What does it all mean? If only there were someone who could find out. Oh, wait, I guess that's my job. We've got lines out to Asmodee and will definitely let you know if we catch any fish. Until then, let's wonder about Vampire: The Masquerade and Mage: The Ascension shall we?

White Wizard Bringing Epic Card Game to Digital via Kickstarter
Wise Wizard Games has brought their previous card game titles Star Realms and Cthulhu Realms to digital, so it was probably only a matter of time until their other card game, Epic Card Game, made it to digital as well. That time has come, as they've launched a Kickstarter to bring Epic to digital.

The Kickstarter just launched and has 27 days to go, but they've already far exceeded their goal and are knocking down stretch goals left and right. This means we can expect Epic Card Game on PC/Mac, iOS, and Android this fall. If you back the Kickstarter now, however, you get alpha access to it starting next month which, if I might point out, is much closer than this autumn.

Let me blurb this out, because the Kickstarter has a ton of information (hint: you should go check it out):

Unlimited Copies of all 120 Cards in the Base Set
No Random Packs (Get a set for one low price and own every card!)
Purchase Once, Unlocks On All Four Platforms
Single Player Campaign Mode
Tutorial
Online Asynchronous Play
Online Real-time Play*
Dark Draft
Random 30 (Sealed)
Constructed
Beginner Decks (AKA Preconstructed Decks)
Deck Builder
Friends List*
Challenge Friends
Play Against Random Epic Players Around the World
Ranked Heads-up Games*
Leagues*
Tournaments*
World Championship Qualifiers*
Unlimited Copies of all 48 Cards in the Tyrants Expansion*
Unlimited Copies of all 48 Cards in the Uprising Expansion*
In-app Currency (Event Tickets)*
Cosmetic Upgrades (Alt-Art Cards, Avatars, Digital Playmats)*
Campaign Upgrades (Additional Maps, Character Abilities, Etc.)*
And More (The best ideas from you, our backers, will be added as app features!)*
The features with an asterisk are planned for the Beta, everything else is ready RIGHT NOW in the Alpha!
Both of White Wizard's previous titles worked pretty flawlessly, and they're still the only company to figure out how to have you pay for the app once and unlock it on all platforms. Not sure about you, but I'm pretty stoked about this one, and will be checking out the Kickstarter later today.

Portal Games Creates In-House Digital Team
Portal Games is no stranger to the App Store. In fact, Neuroshima Hex! is one of the oldest, and best, board game apps available. Thing is, they didn't create it. It was built by Big Daddy's Creations. Not anymore!

In the PortalCon 2017 Keynote, they announced that they have created their own in-house digital team and have bought the rights back for Neuroshima Hex and are going to be updating it to match the 3.0 version currently available in cardboard. The first app that they'll be tackling from scratch will be Tides of Time which we can expect to have both solo play including a campaign and online multiplayer.

Not a lot of info, but you can watch the entire keynote below. The digital news begins around the 2:30 mark. 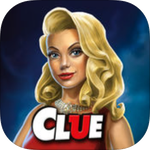 Clue Released for iOS/Android
Despite its flaws, Clue holds a special place in my heart. I absolutely adored it as a kid and still enjoy the theme and deduction today. For some reason, Hasbro hadn't released a proper digital version of the game, with the previous version of Clue on the App Store being more of an adventure/hidden object game.

This ended in January when a port of the actual board game landed on the App Store. Not much to say other than it's Clue. Oh, there's no multiplayer. I guess that's kind of big news. Yep, solo play only. Hmm. It also appears to only be available for iOS, as I cannot find an Android version. If I'm just missing it, let me know in the comments and I'll add the link here.

Still, if you want a quick Clue fix, you could do worse.

Fire Emblem: Heroes Releases Tonight for iOS/Android
Being an old and miserable human being, I have no idea what the hell Fire Emblem is. Brad, being young and full of hopes and dreams, is fully aware of what Fire Emblem is and is quite excited about it. I work for Brad, ergo here's some Fire Emblem news.

Fire Emblem: Heroes is a mobile version of a tactical RPG series that, thus far, has only appeared on Nintendo gear. This is Nintendo's next title after their amazing [-ly boring -ed.], incredible [-ly dull -ed.] first mobile release, Super Mario Run. So, it's big news.

I wish I could say more, but I'm guessing that if you're a fan of Fire Emblem you already know what to expect. For the rest of us, there's a video.

It launches on iOS/Android tomorrow, but with the way the App Store works that might mean late tonight. Keep checking the App Store if this is doing it for you. 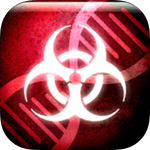 Plague, Inc. Getting Updated with Scenario Editor
Plague Inc. has been on the App Store since 2012 and is one of the first huge mobile successes for a non-free-to-play strategy title. In fact, it might be the biggest success story, spawning both a PC/Mac as well as a cardboard version.

Part of the reason for its success (other than it's crazy scary and a great strategy title) is that developer Ndemic Creations keeps adding to it so it never gets stale. With their latest announced expansion we should never have to worry about it getting stale because they're giving us the power to make and share our own scenarios.

Upcoming is a scenario editor for Plague Inc. which will consist of five different "labs":

No info on the release date, but it will be only for the iOS/Android version and will exist as a stand-alone app instead of IAP. It will run $3 on both platforms.