New Game Round-up: A Trilogy of Revivals — The Thing, The Ruhr, and Cartagena 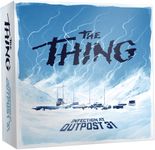 • In February 2017, USAopoly announced the formation of a new designer collectibles division called Project Raygun, which is intended to pair licensed properties with modern creators to produce collectibles, prints, plush, and other items, including tabletop games. Details on the first such game have been revealed, with Project Raygun partnering with the collectibles company Mondo for a board game adaptation of John Carpenter's 1982 film The Thing.

The Thing: Infection at Outpost 31, a game for 4-8 players, bears a description that will likely sound familiar to anyone familiar with the film:

Quote:
It is the start of the bleak, desolate Antarctic winter when a group of NSF researchers manning the claustrophobic, isolated U.S. Outpost 31 comes into contact with a hostile extraterrestrial lifeform. Bent on assimilating Earth's native species, this being infiltrates the facility — creating a perfect imitation of one of the Outpost 31 crew. The staff frantically begin a sweep of the base, desperate to purge this alien infection before escaping to warn McMurdo Station that somewhere, out there in the frigid darkness, something horrible is waiting.

In the hidden identity game The Thing: Infection at Outpost 31, you will relive John Carpenter's sci-fi cult classic in a race to discover who among the team has been infected by this heinous lifeform. Play as one of twelve characters as you lead a series of investigations through the facility using supplies and equipment to clear the building. The tension mounts and paranoia ensues as you question who you can trust in the ultimate race to save humanity!
The game will be released in two forms, with the standard edition hitting retail outlets in October 2017. The deluxe edition, which is limited to 1,982 copies, will be sold exclusively through Mondotees.com; this edition features different packaging artwork by Jock, a Mondo print, an enamel pin, and two additional sculpted movers: the Norwegian character and the Palmer Thing.

• Leo Colovini's Cartagena, first published in 2000, has long been one of my go-to introductory games because when you boil down the gameplay (which is pretty basic anyway!) the game is Candy Land with hand management. You want to get your pirates to the end of the track first, and to move, you play a card and move a pirate of your choice to the next empty space on the track that has the same symbol as the card played.

Simple, yes? Except that the only way to get more cards is to move backward, and that's when things get complicated. No one wants to move backward when you're supposed to be moving forward, and watching people come to grips with this basic challenge gets me every time. You see them make less-than-ideal moves — inefficient choices, you might say — over and over again, then they start to piece together how to do things better. The lightbulb is on, and it keeps burning brighter as they learn why you might not want to take all three actions on a turn or how to bait someone to take moves that will help you in the future. Like nearly all Colovini games, Cartagena is heavy on player interaction since me occupying one space enables you to jump farther down the track — yet I have to occupy spaces, so how can I keep such assistance to a minimum?

In May 2017, Rio Grande Games will release a new version of Cartagena that includes the base game, components to play Cartagena 2. The Pirate's Nest, and multiple variants. (Piatnik has already released a German version of the new Cartagena in Europe, and In more detail:

Quote:
The game includes eight double-sided game boards, and to play the base game you use only six of them. Use more boards for a longer game, or fewer boards (and possibly fewer pirates) for a shorter game. To replicate Cartagena 2, you can flip over three or more of the game boards to create a secondary path that's separate from the first one. Now when you place pirates in the sloop, you can use an action to move the sloop to the start of the second path — and with two paths, you have a harder time making huge jumps from start to finish.

"Morgan" is a variant in which players can now draw cards by moving an opponent's pirate ahead, drawing one or two cards when the pirate stops at the first space that contains one or two pirates; this variant and all others can be used in any version of the game. With the "Filibusters" variant, whenever someone plays one of the twelve cards with a dark background, everyone other than the active player must discard until they have at most seven cards in hand.

Finally, the "Black Magic Woman" variant introduces special powers to the six symbols on the card, and when you play a card, you can use it for pirate movement like normal or use the card' power. You can play two parrots as if they were any other symbol, or use a lantern to look at the top four cards and keep one of your choice. With the gun, you steal a card of your choice from an opponent's hand, with them getting one free draw in return. The treasure chest symbol lets you pick up the treasure chest from the space where you stand, most likely drawing cards from the deck as a bonus, but possibly suffering a snakebite that will have you running back for rum to help you forget the pain!

• Clay Ross at Capstone Games has announced a Gen Con 2017 release date for Thomas Spitzer's The Ruhr: A Story of Coal Trade, a new version of Ruhrschifffahrt 1769-1890, which was originally released in 2012 by German publisher Spielworxx. Here's an overview of the game, and what's been added to this edition:

Quote:
In The Ruhr: A Story of Coal Trade, the second game of Thomas Spitzer's historic coal trilogy, you are transported to the Ruhr region in the 18th century, at the beginning of the industrial revolution. Coal, after being discovered in Haspelknecht, is in high demand as cities and factories throughout the region are in need of this coveted resource. The Ruhr river presented a convenient route of transportation from the coal mines. However, the Ruhr was filled with obstacles and large dams, making it incredibly difficult to navigate. Trade coal for valuable upgrades and plan your route to victory along the Ruhr!

In more detail, the players transport and sell coal to cities and factories along the Ruhr river in the 18th and 19th centuries. By selling coal to cities and factories, players acquire unique progress markers. In the beginning, players have access only to low value coal. By selling coal to certain locations, players gain access to high value coal. In addition to selling coal, the players build warehouses, build locks, and export coal to neighboring countries in the pursuit of the most victory points.

This game includes the standalone expansion The Ohio: 1811-1861. In this game, players transport and trade goods along the Ohio River during a time when Ohio was granted statehood and became heavily populated as its industries flourished. The Ohio is played in a manner similar to The Ruhr, but with new and additional elements.