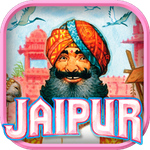 Jaipur Arrives on the App Store
2017 is turning out to be a fantastic year for mobile gaming in general, but specifically for board/card games on our touchscreens. I'm already spending all my time with Race for the Galaxy, Terra Mystica, and the TtA beta. Now, apparently, we need to find time for another card game port: Jaipur!

I've been playing it for a couple weeks now and Jaipur is definitely worth making time for. The UI is remarkably slick, and the AI is good enough to give you a run for your money. There's online multiplayer, pass-and-play, and solo vs. AI as well as a solitaire campaign in which you need to unlock trading regions, each with its own twist on the standard Jaipur rules.

[company=35232 wrote:
[/company]"]Jaipur includes:
• A faithful adaptation of Sebastien Pauchon's original Jaipur game
• Online cross-platform 2 player mode
• Local pass & play mode
• Solo play against 3 difficulty levels of AI
• An extensive campaign mode
• All new artwork by Vincent Dutrait
• Detailed, interactive, turn-by-turn, in-game tutorial.
• Achievement tracking
• No in-app purchases or ads
• Languages available: English, French, German, Italian, Spanish.
Jaipur is on sale with a special launch price right now, so don't dawdle. Even if you haven't played before, you'll want to pick it up. I liked the digital version so much, I picked up the cardboard version. Yes, it's that good.

The only negative is that it won't work on iPad2, iPad Mini 1, or iPhone 4S. Anything after those, though, and you're golden. 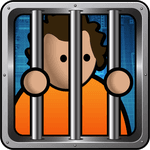 Prison Architect Landing on Mobile Tomorrow
One of our most anticipated titles for mobile isn't a board game port at all, but a simulation/building game that was released on PC back in 2015. Prison Architect is exactly what you think it is, and it was due to land on mobile sometime this spring. Pocket Gamer is reporting that its time has come and it will be released for iPad and Android tablets tomorrow.

Prison Architect is the brainchild of Introversion Software, but the mobile port is coming to us via Paradox Interactive (I) as part of their new focus on strategic mobile titles. They picked a good game to start with. Not only is Prison Architect a fantastic builder/simulation, but the App Store is so barren when it comes to decent builders, Prison Architect immediately moves up to the #1 spot.

Prison Architect: Mobile will be free to download with content available via IAP. Not sure what the content will cost, but all the content from the PC version will be available to unlock in the mobile version.

Keep an eye on the App Store. This is another one that you won't want to miss.

Asmodee Bringing Harald to Digital, Looking for Testers
When Brad told me that Asmodee was bringing Harald to digital, I assumed he meant that kid with the magic purple crayon. Little did I know that there is actually a card game named Harald and it was released just a couple years ago. (I still would like a video game based on the kid and his crayon)

Harald is a 2-4 player card game that plays in about 30 mins.

BGG wrote:
Harald has finally unified the different kingdoms and become the King of this powerful nation. With the newly established peace, the different peoples are going to war on a different battle field: one of intrigue and struggles for influence. Send your emissary to the King’s Council to win his favor so your village becomes the most prestigious.

Harald is game of influence and majority. As the head of a village, each player will try to charm the most influential character of the realm to be noticed by the king and obtain his favor. But to win you will need to think and use wisely the abilities of each character.

Each turn, players execute 3 actions in order:
play one card in the king's council
play one card in his village
draw cards
At the end of the game, each card in the village of a player counts as many points as numbers of the same cards in the king’s council.
Each character also own a condition to score bonus points.
Asmodee is bringing Harald to PC, iOS, and Android but they need some testers to get it moving. That's where you come in. If you want to be a tester, head over here and sign up. You'll need to have an Asmodee account, so you might need to sign in and then click the link. I'm sure you can figure it out.