German publisher AMIGO Spiel has unveiled its line-up for the second half of 2017, and as you might expect if you are familiar with the company, many of the new titles are pocket-sized card games, such as Gier from Alexander Pfister, a 2-5 player game in which you must steal cards from others in order to win. An overview:

Quote:
In Gier ("Greed"), players steal cards from one another to build their own collection, and once you start clawing at others' goods, it's hard to stop — but whoever wants too much will go home empty-handed.

At the start of player, each player takes one crook card and seven number cards, with the number cards being dealt face down from the deck. Players will build up a personal collection turn by turn, with these collected cards being face up.

On a player's turn, they play a card from their hand into their collection, then they're allowed to go on a card raid. They choose an opponent, then draw a card from their hand and place it face up on the table. They can stop and keep that card, or they can draw again from the same player; if two stolen cards have the same number, then the player's turn ends, and the cards return to the victim's hands. If the active player has drawn a crook (and stopped voluntarily), they can take a card of their choice from the opponent's collection.

Some cards have a special action on them that takes effect as soon as they're drawn from someone's hand, such as looking at an opponent's hand or placing cards from the deck into a collection.

Whoever first collects six cards of the same value wins!

• The trick-taking card game Druids comes from the design team of Günter Burkhardt and Wolfgang A. Lehmann, previously responsible for the delightful trick-taking game Potato Man. AMIGO bills Druids as the fifth title in its Wizard-series of games, a series that seems connected mostly by art from Franz Vohwinkel in addition to their shared use of trick-taking. As in Potato Man, players in Druids need to keep an eye on which colored cards have been played during a round:

Quote:
Knowledge is power, but with power must come control. In Druids, the novices of the Stonehenge Academy must collect experience points in various knowledge domains, but you don't want knowledge from just any domain because if you enter a domain not intended for you, then you lose all knowledge previously gained that round.

In more detail, each player is dealt a hand of cards, with the deck containing cards in five colors, numbered 1-12 in each color. Players then play a trick-taking game, and whoever wins a trick must place the cards sorted by domain (color) in front of themselves; if they receive multiple cards of a color in the same trick, the lowest-valued card must be placed on top. The tricks continue until either all cards have been played or one player collects cards in all five colors. In this latter case, that player receives negative points for what they've collected while everyone else scores positively for their topmost card in each color. (If all the cards have been played, then all players score.) Whoever has the most points after five complete rounds wins!

In addition to the regular cards, Druids contains special cards that allow a player to avoid an unwanted trick or remove cards of one color from a player's holdings. 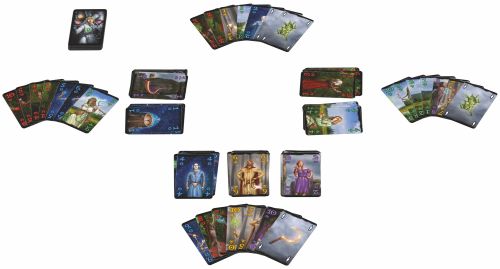 • The components and game board in Haim Shafir's Memo Dice give off a Liar's Dice vibe, but the two games actually have nothing in common once you get past the exterior. Here's how this game works:

Quote:
Memo Dice demands the full attention of players right from the start because they must remember which die faces have been hidden underneath the colorful cups.

The game includes nine six-sided dice that show 54 images across their faces with the sides being colored black, blue, or red. The starting player for the round rolls a die, gives everyone a chance to memorize the topmost face, then covers it with a die cup that matches the color of the face. The next player then rolls a die, and so on. As soon as no die cup remains that matches the face of the current die, the current player covers this die with the gold die cup, ending the round.

This player then has the first chance to guess the first die in the line. If correct, the player scores 1 point, then guesses the next die; if wrong, the next player gets to guess. Whoever guesses the die under the gold die cup scores 2 points. Players play multiple rounds until someone reaches a total of 20 points, winning the game. 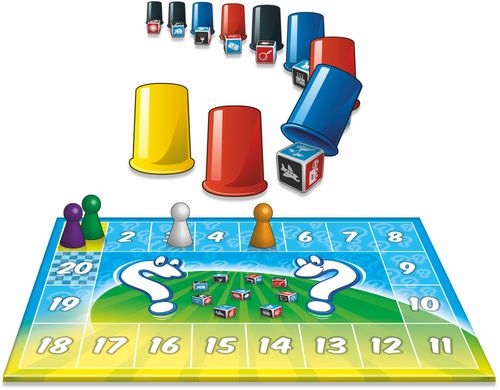 • Reiner Knizia's Schollen Rollen is a press-your-luck dice game for 2-6 players that is possibly already in the database under another name as Dr. K has designed many such games in the past, but I looked various titles over and didn't spot anything that matches exactly, so here goes:

Quote:
In Schollen Rollen ("Stolen Rolls"), players take turns rolling dice to capture different colored fish from a central pool in their net, with yellow fish being worth 1 point and red fish 5.

On a turn, the player rolls the dice, then may collect a fish for each die rolled. Special effects on the die faces may augment what happens, with the player possibly doubling (or quadrupling or even octupling!) how many fish they collect, perhaps stealing fish from an opponent's net, or locking the dice from being re-rolled. After each roll, the player may choose to end their turn and keep their catch, or re-roll the available dice in an attempt to catch more. However, if you roll and don't catch anything, all the fish escape your net and your turn ends.

Once all the fish have been caught, the game ends and whoever has the most points wins!

—Paaranoia: This new German edition of Pairs from James Ernest and Paul Peterson includes the original game as well as four other games that can be played with the same deck, a deck that contains one 1, two 2s, etc. up to ten 10s.

—Sam Bukas Bande: This is a German edition of Tomohiro Enoki's Dungeon Busters, a game in which 3-5 players attempt to take down monsters by pooling their strength. Unfortunately those who play the same number get removed from play, possibly foiling the attack and punishing the person who played a low number and therefore didn't help much toward victory.

—Schöne Sch#!?e: Thorsten Gimmler's No Thanks! receives a new German title to replace the Geschenkt of old.

—Ladybohn: Manche mögen's heiss! ("Some like it hot!"): On its ten-year anniversary, this standalone edition of Ladybohn from Uwe Rosenberg gets a new cover and no other apparent changes. 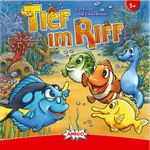 • The final title in this round-up is another reprint, but of an obscure Alex Randolph game that was released in 1993. Here's an overview of Tief im Riff, which is for 2-6 players, ages five and up:

Quote:
In Tief im Riff ("Deep in the Reef"), players work cooperatively as fish swimming through a coral reef to turn over 28 sea animal tiles placed around the game board. The fish start in one location, then travel through a series of paths — following the arrows as they move — to reach openings in the reef.

On a player's turn, they roll a die, then choose one of the four fish and move it along paths a number of spaces equal to the number rolled. After they finish moving, if they're on a space all by themselves, they can reveal a tile that has only one bubble on it. If they share a space with other fish, they can reveal a tile with as many bubbles as the number of fish on that space. Thus, players need to keep their school from wandering too far apart as they travel through the reef.

If the players manage to reveal all 28 tiles before all four fish have swum out of the reef, then they win!
The interesting thing about this new edition is that the original game from Herder Spiele was titled Der Rattenfänger von Hameln — literally "The Ratcatcher from Hamelin", although the English title on the box is The Pied Piper of Hamlin. This game differs from the new one in two ways. First, in Tief im Riff you can reveal certain tiles only if you gather enough fish in a clearing, whereas in Der Rattenfänger von Hameln you placed fifty tokens on the side of the board and you removed a number of tokens from the pile equal to the number of player pieces in the space where you stopped moving.

Second, the tokens in Der Rattenfänger von Hameln represented kidnapped children, so if you failed to win the game, some number of children would never go free. How's that for a burden on young players? 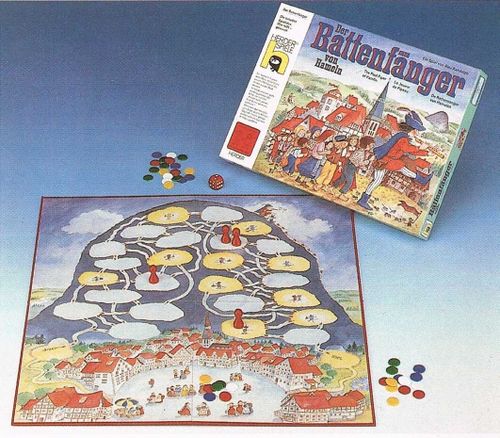