Catan Makes the Jump to Lightspeed

In early January 2012, I posted a teaser round-up of games that would appear on the Nürnberg 2012 Preview – a Preview that is now live, by the way, so feel free to see what German publishers have coming out in early 2012. One of those items was the Star Wars: Battle of Hoth game from LEGO depicted at upper right and I naturally joked about this design landing squarely in the overlap of the Venn diagram of gamers, SF geeks and toy fanatics.

Little did I know what else was coming: 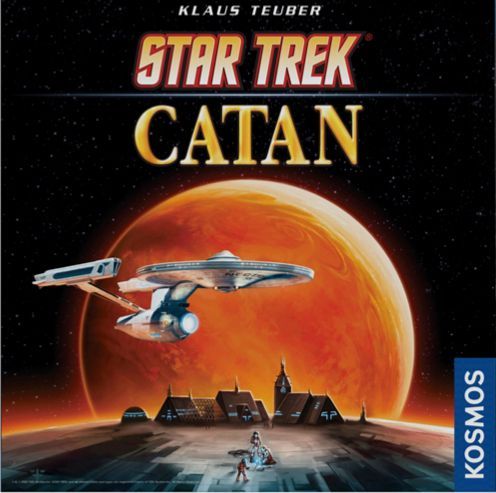 All that's missing in this title is a cameo from Buffy, the Vampire Slayer or, I don't know, Gollum.

In any case, here's a description of Klaus Teuber's Star Trek Catan, which will sound familiar to most every regular BGG reader:

Quote:
Star Trek Catan takes two well-known media properties and merges them into, well, into something that is 95% The Settlers of Catan glossed with Trek tropes and spiced with new special powers related to Trek personalities.

In Star Trek Catan, players start the game with two small space stations at the intersection of three planets, with each planet supplying resources based on the result of a dice roll. Players collect and trade these resources – Dilithium, Tritanium, food, oxygen and water – in order to build spaceships that connect regions in the galaxy, establish small and large space stations at new intersection points in order to increase resource acquisition, and acquire development cards that provide victory points (VPs) or special abilities.

On a dice roll of 7, a Klingon ship swoops in to prevent resource production on one planet, while taxing spacegoers who hold too many resources.

The one new element in Star Trek Catan compared to the Settlers version is a set of character cards, each featuring one of Kirk, Spock, McCoy, Sulu, Scott, Uhura, Chekov, Chapel, Rand or Sarek. Each character card has two special powers that the holder can use on his turn, such as a forced trade.
Star Trek Catan is due out in March 2012 and will retail for €37. Live long and don't roll 7s!