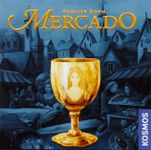 German publisher KOSMOS has already announced one title it's releasing in 2018: Catan: Der Aufstieg der Inka, from Klaus and Benjamin Teuber, which is due out in July 2018. Now it's revealed the rest of its line-up in early 2018, with most of these titles due out in February or March.

• Rüdiger Dorn's Mercado is a big box game due out in March with a confusing description:

Quote:
Welcome to the market of beautiful things! As well-to-do citizens in Mercado, gamers wander around the stalls, always on the lookout for special items to enhance their reputation. Noble shawls, elegant jewelry, or golden trophies — with such a selection, the decision is difficult. But those who do not carry matching coins can also be unlucky because the other players have the same goal and might grab the valuable items from under your nose.

In more detail, different market stalls, each with one product, are laid out as panels in the center of the table. Each player has a personal bag containing different coins. On a turn, you draw three coins from it blind and place them at the market tables of your choice. If a player has paid all the necessary coins of a product, they receive the board and thereby increase their reputation. Some tablets bring extra privileges or seals, others bring counterfeit money that might wander into a bag. Who can buy the most valuable goods?
Wait, we pull money blindly from our bags to pay for things that we've already chosen? A press-your-luck mechanism like that seems odd in a Dorn game; why don't I get to stack my coins, then lay them out in an adjacent configuration? BGG will be at the Spielwarenmesse trade fair in Nürnberg at the start of February 2018, and we have an appointment with KOSMOS to record game overviews, so we'll learn more about the game then and share it with you afterwards. (Possibly we will learn that I've done a terrible job translating the German description. We'll see!) 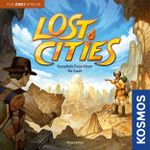 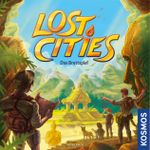 • KOSMOS is refreshing Reiner Knizia's two-player masterpiece Lost Cities yet again with a new look, but it's also releasing Lost Cities: The Board Game in German for the first time. (This title was originally available only from Rio Grande Games in the U.S., whereas KOSMOS had released the similar but not identical Keltis, which won the Spiel des Jahres in 2009 and led to the release of many Keltis spin-offs.)

• In addition to those two titles, in March 2018 Knizia and KOSMOS will release the two-player-only Lost Cities: To Go, which may or may not be one of those Keltis spin-offs in new garb. The current description is vague enough to make things unclear:

Quote:
Lost Cities has been around for ages, and now you can travel these expeditions in a handy portable format, with you once again needing to forge paths across the Himalayas, along volcanoes, under water, and through the rainforest or the desert — but beware of bandits who make for surprising turns!

Each step you take in Lost Cities: To Go requires a tile in the color of the chosen expedition, but you can place tiles only if they're of the same value or higher than what's been placed previously. Only by finding the right mix of tiles will you stay in front and win.

• Knizia's work is also present in a new series of games from KOSMOS titled "Brain To Go", which somewhat suggests that if you play these games, your brain will go bye-bye, but which instead are meant to reassure you that you can strengthen your brain's abilities with a small travel game. All three games in the series are memory games, with Knizia's Gans schön verdächtig ("Pretty Suspicious Goose") challenging you to recall characteristics of burglars, Maureen Hiron's Der lila Wal ("The Purple Whale") challenging you to match the color or type of hidden sea creatures, and Dirk Baumann's Schwein oder nicht Schwein challenging you to remember the contents of your backward-facing hand of cards.

• Machi Koro Fussball takes the familiar Machi Koro game from Masao Suganuma and changes the setting, with players now being investors who build stadiums, training centers, clubhouses, and more to profit from the upcoming World Cup tournament being held in your town. 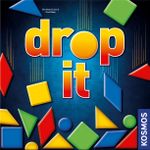 • KOSMOS always seems to have one abstract-ish design in its offerings every six months, and the early 2018 offering is Drop It from Bernhard Lach and Uwe Rapp. At first glance the game resembles Kris Burm's Batik, but the game is a multi-round attrition of pieces as you try to force your opponent to play something that sticks outside the playing area. Drop It is doing something else with a similar set-up:

Quote:
Circles, triangles, squares and diamonds: Drop It is about letting go, with the pieces you drop landing somewhere in the vertical game board, ideally where they'll score the most points, but the tiles bounce around and don't always land where you expect them to!

In more detail, each turn the active player drops one of their pieces into the slot of the game board. The player scores points for the highest level that the piece touches and for any special locations that it touches, but if the piece touches anything of the same shape or color, then you score nothing! What's more, certain pieces are forbidden at certain spots on the edge of the playing area.

The Drop It rulebook includes variant rules for simpler play or more variety from game to game. 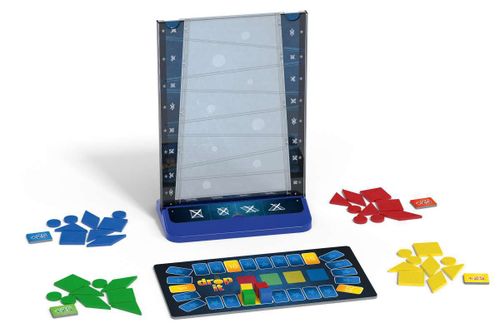 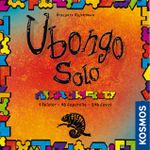 • As best as I can tell, Grzegorz Rejchtman's Ubongo Solo is not a game, but a collection of 546(!) logic puzzles that use 45 polygonal pieces from Ubongo, Ubongo extrem, and Ubongo Trigo and 50 double-sided task cards to challenge the solo solver, starting in March 2018.