[Editor's note: I often have lots of posts in preparation at the same time, and sometimes a draft of a post will sit in my queue forever, having been pushed off the front page by other posts, both in process and published. The funny thing is that those posts sometimes remain newsy, as with this brief round-up of Japanese games that I had assembled in January 2018. Yes, this has been sitting in the queue for nearly two years, yet I would wager that at most four people who read this blog will have heard of these titles previously. In my quest to clear out older material that still merits seeing, I present this post to you today. —WEM]

• Japanese publishers have tended to release small, quick-playing games, but some publishers have been working on more involved designs, such as Hisashi Hayashi of OKAZU Brand with Yokohama and Emperor's Choice. New Games Order released the 75-minute Stone Garden in 2014 to wild success, then the two-hour-long Mandara in 2015. In mid-2017, New Games Order released a title that would sound familiar coming from Lookout Spiele: the village management game 六次化農村 (Sixth Rural Village) from 神田 恒太郎 (Kanda Kotaro). Here's an overview:

Quote:
In 六次化農村, the player runs a farming village, aiming to develop and contribute to the village the most as a farmer over the course of six years (six rounds). To do this, players must earn money by making crops and livestock products, then selling them. Additionally, players need to demonstrate great leadership in the village parliament in order to make processing buildings that create more valuable products to sell. Also, the parliament will decide who receives subsidies, so you need to keep this in mind. Furthermore, you will be forced to make a very difficult choice between how much you will focus on parliament and focus on the village.

This is a heavyweight game that asks you to consider various elements such as product trends, field and building positions, and voting in parliament, but each element is well intertwined, making it an enjoyable game.

• ワイルドゴールド (Wild Gold) from ナラセン (Narasen) and ロクジゾー (6jizoGames) debuted at the Kobe Game Market in March 2017, then was released again at the Tokyo Game Market in May. The description of the tools in this description makes far more sense when you reference the image below:

Quote:
In the card game ワイルドゴールド, players create tools from cards and use them to dig a gold mine.

At the start, each player has a "small axe" made of one stone card and one wood card. In the play area are item cards — wood, stone, iron, and fire — and treasure cards. As players collect item cards in their hand, they can assemble various tools, such as a "big axe", "small pickaxe", "spear", and "wood bomb". 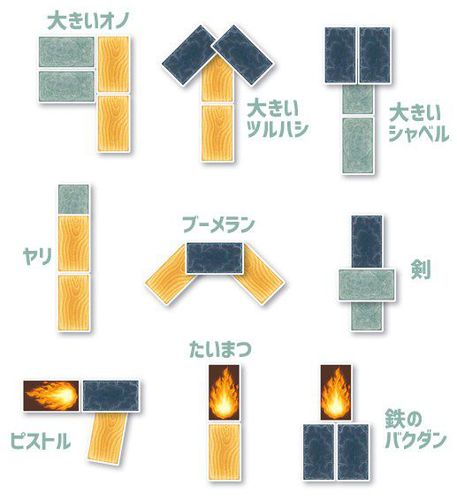 • I don't have details on the gameplay, but here's an overview of のチャイニーズ・レストラン (Chinese Restaurant) from designer Canzume Honpo, who publishes under that name (缶詰本舗):

Quote:
のチャイニーズ・レストラン is a cooperative game in which you order dishes served on a turntable in a Chinese restaurant. Take pieces of food from the plates and meld them for takeout orders.
Look at these components! Some of the JP designs merge art and game design completely, making it difficult to just boil things down to the mechanisms of the gameplay since the components immerse you in the setting or feeling that the designer has tried to create.