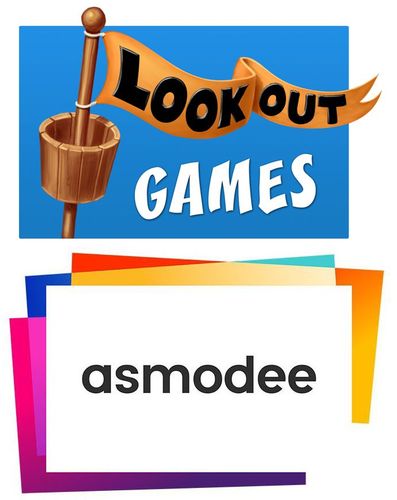 The news that some gamers have been anticipating — and possibly dreading — has arrived: Asmodee has acquired German publisher Lookout Games.

This news shouldn't be a surprise. In November 2017, Mayfair Games — which had purchased a controlling interest in Lookout Games in 2013 — parted ways with employees Alex Yeager, Julie Yeager, Chuck Rice and Dan Decker, all of whom worked on marketing, public relations, and distribution. As I noted on Dec. 1, 2017, this left most of the Mayfair development team — which was essentially the Lookout Games development team — intact, which suggested that games were still being signed and developed, with the distribution of those games to be left in the hands of someone else.

In this same time period, Lookout Games owner Hanno Girke identified multiple projects that were still underway, such as a revised version of Agricola: Farmers of the Moor, a new German version of 1830: Railways & Robber Barons, and multiple new Agricola card decks. Heck, I just returned from the 2018 Spielwarenmesse trade fair where Lookout had a huge number of titles on display that are scheduled for release in 2018 and 2019.

While Lookout Games was doing its thing, owner Mayfair Games apparently wasn't. Lookout's SPIEL '17 releases — including Nusfjord, Riverboat, Isle of Skye: Journeyman, and the Agricola: Artifex Deck — were sold at that show in English and German editions, but only the German copies made it into widespread distribution, but the English-language games didn't make it to retail outlets in North America. (At BGG.CON 2017 in November, Alex Yeager had told me that English-language versions of these games wouldn't be shipped to North America until January 2018 — a date that has now passed, in case you hadn't noticed.)

Asked about this, Girke says, "Well, the games should have been on the ship to the U.S. pre-Essen. For reasons out of my reach, it didn't happen, so most of the games slated for the U.S. have now been sold to the UK and other EN-language buying European markets. But we managed to schedule early reprints to be ready to ship games as soon as this deal was done."

As for that deal, here's the first part of the press release issued today by Asmodee:

Asmodee Group, a leading international games publisher and distributor, is pleased to announce today the acquisition of German based board and card game publisher Lookout GmbH.

Founded in 2000 by Hanno Girke, Lookout GmbH are well known for series such as the cult classic Agricola, a Euro style board game created by the celebrated designer Uwe Rosenberg, which launched in 2007 and Caverna, an update and new take on the former, that went on to garner critical acclaim.

Most recently, Lookout GmbH published 'Isle of Skye', a tile laying game that won numerous awards throughout 2015 and 2016, including the coveted 2016 Kennerspiel des Jahres.

Lookout GmbH will remain an independent studio within Asmodee and ASS Altenburger GmbH will continue to handle German language distribution. In North America, distribution duties will now be handled by Asmodee North America following on from the great platform that Mayfair Games helped establish. European distribution for English language products will be handled by Asmodee European distribution business units whilst the remaining territories will fall under the responsibility of Asmodee Group situated in Paris.
An Asmodee North America (ANA) spokesperson confirms that many of the Lookout titles from SPIEL '17, as well as out-of-stock items like Bärenpark, are on their way to the U.S. "Details about North American release dates will be made public shortly."

You might notice something missing from that headline and the first few paragraphs of the press release, namely the fate of Mayfair Games itself. All of the fanfare in this announcement is for Lookout Games, and that's understandable given that (1) Asmodee had already acquired the English-language rights to Catan from Mayfair in early 2016, with Catan being the biggest part of Mayfair's business at that time and (2) since its sale of Catan, Mayfair had largely transformed itself into a publisher of games from Lookout. If you look over the list of games that Mayfair released in 2017— 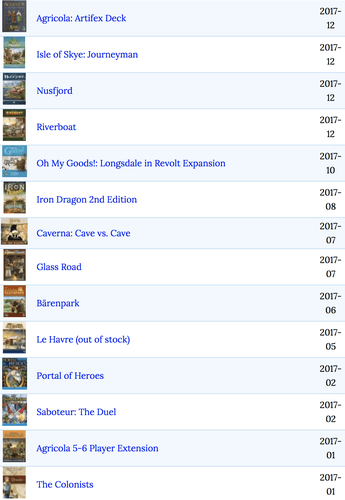 —all but three of those titles originated at Lookout, with the three exceptions being a revamped edition of Iron Dragon (first released by Mayfair in 1994), as well as two titles licensed from German publisher AMIGO: Portal of Heroes and Saboteur: The Duel. (Side note: In December 2017, AMIGO established a U.S. division in Austin, Texas for the release of its own games in English. AMIGO plans to debut these titles at the NY Toy Fair in mid-February 2018, and I'll have details on its initial U.S. line-up in the near future.) In 2016, Mayfair's only new non-Lookout title was Steam: Expansion #5, which was designed by Morgan Dontanville, who had left Mayfair in 2016 to join the newly formed Catan Studio.

So what's happening with Mayfair?

Quote:
Mayfair Games Inc., a long-standing game publisher based out of Skokie, Illinois, is withdrawing from games publishing and have entered into an agreement with Asmodee to assume all their current IP. "Mayfair Games has a 36-year history for publishing great games," said Larry Roznai, President of Mayfair Games. "In Asmodee we have found a partner who will provide a platform for the continuation of our best games."

Will the Mayfair Games brand continue to exist? "That, sir, is up to them," Roznai told me, adding that "[t]hey will own all of our trademarks and copyrights, and what they choose to do with it is still undetermined. I am retiring." Girke confirms that all English-language releases of Lookout designs will now bear the Lookout Games logo.

The ANA spokesperson says, "We have yet to make any decisions about how we manage the Mayfair brand in the future, but Asmodee is proud to be able to bring Mayfair's games into our portfolio. We recognize the heritage behind some of the best known titles (such as the 18xx series) and we are looking at the best way to develop these IPs in the future." ANA is also talking with Gen Con about floor plans for 2018 since Mayfair Games had a long history at that convention, and whether that highly-prized floor space comes with the purchase of Mayfair itself is unclear.

Why didn't Asmodee just purchase all of Mayfair in early 2016 instead of solely the rights to Catan? In December 2017, I speculated as follows: "Lookout Games' releases in 2016 and 2017 have been hit after hit after hit, so perhaps Asmodee has decided that it acted hastily at the end of 2015 when it acquired only the English-language rights to Catan from Mayfair and left the rest of the company alone. I'd wager we'll find out what's happening once the calendar flips over to 2018 just one month from now..."

I put that question to the parties involved, with the ANA spokesperson saying, "It wasn't for sale then", and Girke confirming this: "Back in 2016, there were no talks about an acquisition of Lookout." Roznai paints a slightly different picture, saying, "That is because they didn't want the rest at that time."

As for how this deal came about now, Girke says, "Asmodee offered an opportunity to grow, especially on the U.S. market. Talks started last fall, and we've been in great discussions since... I'm not at all involved in the Mayfair-Asmodee deal. All I can confirm is that Asmodee took over the 74% of Lookout that Mayfair held, as well as the 26% that were still in my possession." The ANA spokesperson confirms this arrangement, stating that "Asmodee has paid separately for both Mayfair's shares in Lookout & Mayfair's inventory and IP assets. Our understanding is that Mayfair have cleared all their debts themselves."

To finish the press release:

Quote:
"It's an exciting task to run Lookout as a studio, and I'm grateful to have been selected for it. It is good to be back." said Hanno Girke, Lookout GmbH. "I'm also proud to announce that Lookout bolsters their ranks by adding Ralph Bienert (who was running Games' Up) and Atelier 198's Andrea Kattnig to their crew."

"We're thrilled to welcome Lookout GmbH to the Asmodee Group," said Stephane Carville, President of Asmodee. "With a great pedigree of Euro games in their portfolio, their spectacular range of Euro classics are sure to enchant generations of players to come."
For context to the statement above, after Mayfair had acquired a controlling interest in Lookout, Girke had stepped aside from the company, focusing on his primary job as a teacher with his wife Doris Girke-Meßmer acting as managing director of Lookout. That has changed with the company's acquisition by Asmodee. "I quit my teacher's job to take over as the Head of Studio, focusing on the creative side. Doris is still with the company, helping me with the non-creative side of the job."

As for what's coming from Lookout, Girke relates this about the line-up shown above: "We had some great releases in the last years, so one of our main foci will be to give them time to grow, supporting them with expansions, promos, and other fancy things. Still, we're proud that we found another set of great gems that we'll publish along with them. Expect Lookout to do what Lookout does best. Yes, I'm also more than excited about the new Patchwork versions. Klemens is working on a set of new fabrics at the moment, to give him a break from all the Agricola cards he still has on his list. There'll be a bunch of new promos…2018 will be an exciting year. And I can promise you a very special, Lookout-like Easter Egg. Oh wait, it's just six weeks until Easter…"

Asked for a final status, Roznai says, "Lookout sold, Mayfair Europe closed, Mayfair USA closed, Twilight [Creations] back with Kerry" — with this latter development having been covered by BGG News here. At the GAMA Trade Show, which he regularly attended, he said he would be "Doing a seminar, maybe a few panels, helping GAMA with hall monitor service. And I will be going to Gen Con for the fun..."