Patron Badge for 2012
Six Ages Coming June 28th
Six Ages, the sequel to the classic Kind of Dragon Pass, is set to release on June 28th on iOS. I’ve been looking forward to this for a long time. You can pre-order starting June 21st at a price of $9.99.

If you’ve never played King of Dragon Pass, this combination of grand strategy game and choose your own adventure has become a cult classic. It is truly something special with the ability to capture a complex story in a unique package. Released almost 20 years ago, it also has a really unique world view that tackled many social issues. This is one not to be missed.

Six Ages looks to continue that legacy. Here is a description from the team:
Quote:
Producer David Dunham said, “I was really happy to be able to get so many of the original team back together. Our goal was to capture the magic of King of Dragon Pass, and make something that wasn’t just a simple sequel. So we jumped back in time about two thousand years.”


Six Ages: Ride Like the Wind takes the elements that made KoDP unique (the mythic setting where you can visit the gods, multiple-choice decisions with consequences, advisors with personality, a generation-spanning story, story elements that recombine for replayability) and remixes them. Play is both simpler and richer (for example, you’ll get to make more decisions in combat), and the UI was designed with attention to mobile devices (the menu puts more information at your fingertips, and all artwork is high resolution).
This is one to keep an on. Here is a look at the release trailer:


Full disclosure, David Dunham, producer of Six Age, is a former co-worker and good friend of mine. 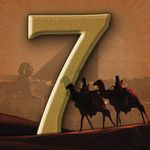 7 Wonders Cities Releases
The 7 Wonders app has been making steady improvement since its release. This week we get the release of the latest expansion: Cities.

You can pick up the app the expansion on iOS and Android here.


Out of the Loop Party Game Coming Soon
The team behind Sumer and Triple Agent is releasing a new mobile party game next week.

This one appears to be similar to Spyfall and can be played on a single or multiple devices. Like Spyfall, you play with a group where one person is secretly the spy. The rest of the group has a secret word that the spy is trying to figure it out. The app serves up suggested questions to help players keep things moving.

The release date is aimed at June 14th so look out for this soon. Check out this preview from GDC from the folks at Touch Arcade: