New Game Round-up: Steal from the Future, Spring Tricks on Others, and Play for Your Partner

I send so many notes to myself about new games that it's hard to keep up with them all. So many games! Here are a few titles in the inbox that I've yet to cover:

• Designer Richard Breese of R&D Games has announced that his SPIEL '18 release will be the card game Key Flow, co-designed with Sebastian Bleasdale and Ian Vincent, and it plays as follows:

Quote:
The great river Key Flow passes through the new Key Lands, carrying ships laden with resources for building and trade. Along the riverside, buildings are built, boats are moored in docks, and animals graze in the fields. Players build communities alongside this river, and send workers (known as "keyples") to work in both their own and their neighbors' businesses, enabling their economy to develop and flourish.

Key Flow is a card-driven game based on many of the ideas contained in the award-winning game Keyflower. The game flows quickly over four game rounds (seasons), allowing players to develop their own unique village, with many ways to score points for their buildings, animals, keyples, resources and other items.

Key Flow is played over four seasons (rounds). Each season, players are dealt a number of cards. They then choose one of their cards and pass the remaining cards to the player on their left or right — depending on the season — until all the cards have been chosen. All scoring takes place at the end of winter. Points are scored from the village cards in various ways, through upgrading buildings, and from gathering gold. The player who scores the most points wins.

• Timeline alert! I'm not sure how much A Thief's Fortune from Konstantinos Kokkinis, Sotirios Tsantilas, and Artipia Games qualifies as a time-travel design, but it has some elements going on in that vein, so it caught my eye and now here it is in this space:

Quote:
Nabbarah: A city full of wonders and stories to be told — a glimmering jewel in the middle of the desert.

You are a thief, always on the lookout for the next target to hit. You decide to sneak into the Royal Palace, break in its treasure room, and look for the mythical treasures rumored to be hidden there. Among piles of gold, emeralds, and precious jewelry, you stumble upon a chest containing a mysterious hourglass. As soon as you touch it, you are filled with mystical energy and realize its true power: You are now able to see glimpses of your own future. By taking different courses of action, different paths unfold before you, allowing you to shape your future as you see fit. Unfortunately, everyone in the palace is now after you...

A Thief's Fortune is a card game for 1-4 players in which each player represents a different possible future of the same character. By visiting different locations, interacting with local characters and making sure that certain events you have seen actually happen, you try to find the path that will lead you as far away as possible from danger.

In more detail, players each have three area in front of them: past, present, and future. Over five rounds, players draft location, event, and character cards, adding them to their personal "future" area with resources on those cards. Players extract resources from those cards, and when they're empty, the cards move into the player's present, after which the player can activate the power on those cards to score the fortune points they need to win the game. 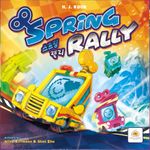 • Korean publisher/game agent Mandoo Games has an interesting entry in the category of "trick-taking games with a twist", this being Spring Rally, a 2-5 player game from H.J. Kook that encourages you to lose tricks in order to gain in future rounds:

Quote:
Welcome to the toy spring car rally! No more dust rising or motors roaring. Instead you'll see sweet little cars run squeaking along the racing track. You must use the rally cards to move forward or wind up your spring. The more you wind it up, the more you will travel — but never wind more than needed, or things can go wrong. It's time to begin the race! The first person to finish two laps will win. Let's start the engines...I mean...wind your springs and let it roll!

In Spring Rally, players control their toy car based on trick-taking mechanisms. The game lasts three rounds, and in each round, players play a card from their hand to advance their car on the track. If the player wins the trick, they move their car as much as the lowest number on the card played in the round. Other players wind up their spring, which can help to boost them along when they win a trick. As long as a player avoids winning a trick, they gain the chance to advance much more later — but too much winding makes your spring stop working!

The player who first circles the track two times wins the game.

• In a report on the Herne Spielewahnsinn gaming event in May 2018, German game site Brettspielbox gave a brief overview of Concordia Venus, the next expansion for Mac Gerdts' Concordia from PD-Verlag. To translate, Concordia Venus is playable with four or six people playing in teams, with teammates sitting across from one another. When one team member plays a card, their partner does the same action as well immediately. Warehouses remain separate for each team member, but they can otherwise help one another. A new god included in this expansion scores areas where both teammates are present.

• Let's close with another SPIEL '18 release to close the sandwich (as it were). In October 2018, Strawberry Studio will release a tiny game from Robin Lees and Steve Mackenzie titled Little Monster That Came For Lunch And Stayed For Tea. An overview of this game for 2-4 players:

Quote:
Little Monster That Came For Lunch And Stayed For Tea is a light racing game in which playing your cards right and using the abilities of your two unique monsters makes for a very tasty difference! Each game you are assigned two unique little monsters to feed as quickly as you can as you race against one, two or three opponents. Each little monster has its own special skill, and you want to combo these skills and card abilities to create awesome combos.

On your turn, you either play or draw cards. If you play, you create combos that will move your monsters forward, pushing the opponents' critters backwards! You win the game as soon as both of your monsters reach the end of the table, so eat up!