Sorry I've been away for so long, folks. Started a new job and still trying to get used to the new schedule. Also, it's been fairly slow. That ends today and, hopefully, we'll be getting all sorts of fun news through Gen Con. Stay tuned! 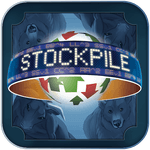 Stockpile Coming to Digital
The last time I posted we talked about Digidiced UG bringing the Stefan Feld classic, The Castles of Burgundy to digital in 2019. Of course, we're still waiting for their digital version of Isle of Skye: From Chieftain to King which is currently in beta. Today we learned that those aren't the only two games they've been working on. They've also been hard at work to bring the Nauvoo Games' economic gem, Stockpile to life.

Digidiced wrote:
In Stockpile, players act as stock market investors at the end of the 20th century hoping to strike it rich, and the investor with the most money at the end of the game is the winner. Stockpile centers on the idea that nobody knows everything about the stock market, but everyone does know something. In the game, this philosophy manifests in two ways: insider information and the stockpile.

First, players are given insider information each round. This information dictates how a stock’s value will change at the end of the round. By privately learning if a stock is going to move up or down, each player has a chance to act ahead of the market by buying or selling at the right time.

Second, players purchase their stocks by bidding on piles of cards called stockpiles. These stockpiles will contain a mixture of face-up and face-down cards placed by other players in the game. In this way, nobody will know all of the cards in the stockpiles. Not all cards are good either. Trading fees can poison the piles by making players pay more than they bid. By putting stocks and other cards up for auction, Stockpile catalyzes player interaction, especially when potential profits from insider information are on the line.

Both of these mechanisms are combined with some stock market elements to make players consider multiple factors when selling a stock. Do you hold onto a stock in hopes of catching a lucrative stock split or do you sell now to avoid the potential company bankruptcy? Can you hold onto your stock until the end of the game to become the majority shareholder, or do you need the liquidity of cash now for future bidding? Do you risk it all by investing heavily into one company, or do you mitigate your risk by diversifying your portfolio?
It's a really fun and quick game of stock market mayhem that doesn't take itself too seriously. Here's what we know so far. It's coming for iOS, Android, and PC/Mac/Linux. It will have both online and pass-and-play multiplayer as well as 3 levels of AI for solo play. It will also have the ability to replay games so you can see just where you screwed up. 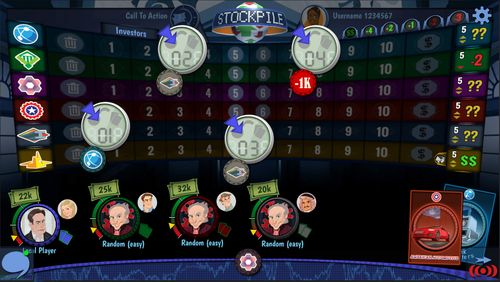 We also know that the beta will be starting at Gen Con, but you can sign up now. Head this way and see if you can be one of the lucky ones. I'll be at Gen Con and will try to get some hands-on time with the app there and, hopefully, get some video of it in action. We'll see!