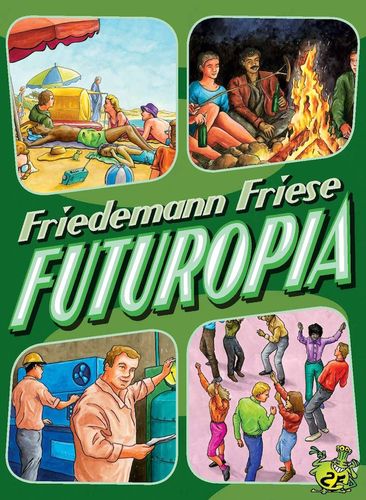 Time to start looking at some of the titles being placed in the SPIEL '18 Preview — 446 listings to date! — and what better place to start than with German publisher 2F-Spiele near the top of the list.

Designer Friedemann Friese will have four titles at SPIEL '18, with the largest of the bunch being Futuropia, a 1-4 player Power Grid-sized game that presents a fun mind-experiment of a setting:

Quote:
In Futuropia, players live in a future Utopian society that possesses desirable lifestyle qualities for all of its citizens. Too bad this is not today's reality...

In this Utopian society, we all will work much less. Our robots can do nearly everything already. There is no need for great envy. It is simply about equality, justice, and the fair allocation of the complete and still necessary work, which then gives us ALL more leisure time.

Success means we will have time for the activities we like the most: fishing, farming, fencing, flying, ..., as well as gaming, building, painting, traveling, composing, and more. If somebody wants to work more than needed, they should do that. This is about the freedom! So let us rethink this: joblessness is not a disgrace, it is the new goal!

We are members of a team striving to realize this utopian ideal. We try to develop completely self-sustaining homes that function as efficiently as possible. They must generate enough food and energy to allow the residents the greatest possible freedom (thus, leisure time). The more people in our development who no longer need to work, the closer we are to reaching our goal! The player who builds the best development will win the game, and their development will become reality!

Futuropia is a luck-free economic game. To ensure you always encounter new challenges, we offer multiple game set-up variations, which create a variety of gameplay situations, ensuring new experiences and replayability. The solo game offers you an option to learn the mechanisms and processes of Futuropia before you play it with other players.
Futuropia is due out in October 2018, with Stronghold Games releasing this game — and the other three 2F titles — in English. 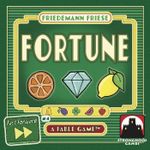 FORTUNE is the fourth title in Friese's "Fast Forward" series of games, designs in which you have no rulebook to read but instead have the rules embedded in the deck of cards that comprise the game. The top card of the deck gives you some instruction, then you do stuff until another rule card appears to clarify what you're trying to do or put a twist on what's come before.

At Gen Con 2018, I played a few games of FORTUNE on camera with Steph and Rodney during a publisher no-show. On a turn, you either draw a card from the deck or take a face-up card from the table and add it to your hand. If you now have four cards in hand, you must discard a card to the table, with all discards being visible. If six cards have been discarded, everyone reveals their three cards, with the player with the highest hand winning the game. Simple!

Except that some cards provide bonuses if you meet a certain scoring condition or have certain cards in your hand, which other people don't know about initially. You might be working toward a hidden goal, but win or lose, you must reveal those cards at the end of the game, so now everyone knows about them and might take caution with what they discard — except that one player's cards are removed from play after the game while all of the other cards and three new ones not previously seen are shuffled together and placed back on top of the deck to prepare you for the next game. The slot machine motif makes perfect sense for the game because each play is brief, you're playing the odds, and often you don't know what's coming!

Fasat Forward: FORTUNE is the one 2F title due out in September 2018, while everything else is due out in October.

• Fool! is a new edition of Friese's wonderful trick-taking game Foppen, which he released in 1995. I've played the game ten times over the years, which is far too few, but that's the case with far too many games...

Foppen has two twists in the trick-taking formula: (1) the four suits have different numbers of cards in them, which means that players are usually short in the same suit, and (2) whoever plays the lowest card in the trick must sit out in the subsequent trick. The game included a disc that depicts a fool, and typically if you were that round's fool, you'd slide the disc into the trick as your contribution because someone other than you would be claiming it. When one player ran out of cards, the hand would end, with players being penalized for the cards left in their hand. Thus, you want to play in every trick to stay on a trajectory of going out, but the winner of the trick leads to the next one, so if you never win, you might not be able to stay on suit.

Fool! includes more cards in the game, with the play count of this new version being 4-8 players instead of 3-6. You adjust the particular make-up of cards in the deck based on the number of players, and with seven and eight players, you use two fool tokens to ensure that more people are called out as dopes for having terrible cards (or perhaps for playing their awesome cards poorly). The final twist in the game is that the 1 cards count as every suit, specifically the lowest card in every suit, but you don't have to play them to follow suit if you don't want to. If someone leads green, and the next player plays off-suit, then if you have a 1 but no green cards, you can also play off-suit — preferably higher than the player before you! — to save your 1s for future tricks.

• The fourth title from 2F-Spiele is Fine Sand, a deck-deconstruction game for 1-4 players with a name apparently derived from a German practical joke. An overview:

Quote:
You are at the beach during your vacation. Everything is peaceful and in harmony. Out of a pure love of life, you start to build a sand castle. Wait...what are your neighbors doing? Everywhere, sand castles rise up, but it was you who wanted to build the best, highest, biggest sand castle. Suddenly, everybody is in the middle of a competition.

Everybody builds by themself with the materials on hand. Who will deplete all their materials and win the sand castle competition? Every player for themself, and all against each other, that's what's going on here. Frequently, you can "off-load" on your neighbors some unwelcome materials, but ultimately you are your own builders and only the player who uses their options best wins!

Fine Sand uses the "Fable Game System" introduced in Fabled Fruit, and in addition to a stack of starting cards, each player receives a presorted stack of Fable cards. With these cards, you change your card stack from game to game. Continue to play, or reset and play the game again with the same or different groups. Fine Sand includes an addictive solo campaign!