• Ghosts of the Moor is a game from famed design duo Michael Kiesling and Wolfgang Kramer that publisher Tasty Minstrel Games plans to debut at SPIEL '18 in October. Here's an overview of this charming-looking design for 2-5 players:

Every turn in Ghosts of the Moor, you move one of your explorer pawns forward. If you leave a space containing a tile and no other explorer, you must pick up that tile — which is good if it's a treasure and not good if it's a ghost. If you leave a space that contains no tile, you must discard a tile instead. When moving to a space with no tile, if you have a wooden plank, you may place that down where you land to bridge the gap across that obstacle.

Once all explorers have escaped the swamp, players score points for collecting sets of treasure and for reaching the end early. Players lose points for ghosts they have picked up along the way. The player with the most points wins!
The gist of the game — pick up a tile when you're the last to leave a space — sounds akin to K&K's great roll-and-move game That's Life!, which was first released in 2005 by Ravensburger, but it apparently has other things going on as well with the planks and discards, so we'll have to watch for more details later.

• Let's follow ghosts with the announcement of Ghostbusters: The Card Game, with Renegade Game Studios teaming up with Albino Dragon for this November 2018 release from Erica Bouyouris and Daryl Andrews. This game is also for 2-5 players, and it also resembles a previously released game. Can you tell from this description?

Quote:
Ghostbusters: The Card Game is played over three rounds. In each round, players take turns until all twelve ghost cards from the circle have been captured.

On your turn, you take up to two actions (playing an action card for its effect or discarding a card to hope for a better one), capturing the ghost card where the ghost trap is currently located, moving the ghost trap to the next card in the circle, then refilling your hand to three cards. After three rounds, players tally their score based on the ghosts they've captured.
My initial thought is that this design is a take on Paul Peterson's Guillotine, a card game from 1998 in which you play action cards, then collect the head of whoever stands at the front of the line, but more immediately Ghostbusters: The Card Game is a new version of Bouyouris' and Andrews' Ink Monsters, which Albino Dragon released in 2017. 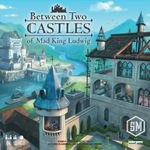 • At Gen Con 2018, Restoration Games, which specializes in revamping older games and bringing them back to market, announced that it would release...not Dark Tower, the game which people have asked for the most since the company was founded, but a standalone game meant to capture the spirit of the original design while being a step up in terms of gameplay. Here's an overview of Return to Dark Tower, which is being designed by Isaac Childres, Rob Daviau, JR Honeycutt, and Justin D. Jacobson for a planned release in 2020:

Quote:
For an age, the tower lay in ruins. Unbeknownst to the people of the realm, a great evil stirred in its bowels. It started with strange sightings: a flock of crows flying in circles until they dropped from the sky, the lake frozen solid in the height of summer. In time, they could not deny that which they most feared.

The evil had not been vanquished. The darkness would soon fall again. The tower will rise.

A "sequel" to the 1981 grail game, Return to Dark Tower is a cooperative game for 1-4 players who take the role of heroes. Together, they gather resources, raise buildings, defeat monsters, and undertake quests to build up their strength and discern what foe ultimately awaits them. When the heroes face the tower, the game shifts into its dramatic second act, where the players have one chance to defeat the enemy once and for all.

The game features traditional game mechanisms, such as engine building and resource management, paired with a technological interface unlike any seen before in games, including the titular tower, which holds more than a few secrets.
And if you want to see Rob Daviau talk about the effect of the original game on his young mind and what he hopes to achieve with Return to Dark Tower, you can watch this short video recorded at Gen Con 2018: