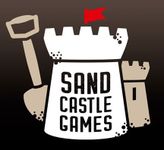 • Sand Castle Games is a new California-based game publisher run by Maud and Cyrille Daujean that will debut in 2019 with the Tom Lehmann title Res Arcana, which features engine-building, deck-management, and resource management. As for the setting:

Quote:
In the four corners of the world, the sky is covered with clouds, the oceans change color, the atmosphere crackles with magic. In the dim light of an alchemical laboratory, on the snowy summit of a sacred mountain, in the depths silent of a corrupt temple, powerful mages prepare for confrontation.

They harvest, handle, and consume the essences that make up the magic of the world to create mysterious artifacts. As they bring out strange creatures from the void, they conquer terrible places of power and invoke gigantic dragons to defeat their opponents!

• German publisher ABACUSSPIELE will debut a new title by Matthew Dunstan and Brett J. Gilbert at SPIEL '18: the draft-based, city-building game City of Rome. What's more, the publisher will have limited quantities on hand at SPIEL '18 of the English-language version of the design from Z-Man Games, which is titled The Great City of Rome — which kind of says something about how those in Germany and the U.S. think about such things. Here's my summary of the rules:

Quote:
To rebuild the Eternal City, the Roman Emperor summoned the most talented builders of antiquity. Each of them is trying to draft the best city — but talent is not enough. Only those who know how to please the Emperor, cleverly exert their influence, and invest at the right time will succeed in City of Rome.

In more detail, the game lasts fourteen rounds, and in each round, players draft one of the building cards in play and add it to their hand. The drafting order depends on how closely you stand to the emperor. At the start of a round, you reveal a new "action strip" that has three bricks and two cogs in some order, then players take turns placing their figure on one of these five spaces; the closer you are to the emperor, the earlier you draft, but the fewer resources (bricks and cogs) you receive. (With only two players in the game, each player places two figures on the action strip and takes two complete turns each round.)

After drafting, you can take one build action and one produce action. To build, you must pay the cost in bricks — paying two coins for each missing brick — then place the card you're building adjacent to another card of yours already in play. You start with two building cards in play, so you'll have at most sixteen cards at game's end. These cards must fit in a 4x4 square, so plan carefully since you'll want to place some buildings next to other ones to earn the most points and to get the most out of a produce action. Some buildings give you a special action or influence tokens when you build them.

To produce, you must have two cogs — paying one coin for each missing cog — then use the production action of each building in your city once.

Every few rounds, an influence card is revealed, and whoever has the most influence tokens at the end of that round collects the card, then discards their tokens.

At the end of fourteen rounds, players score points for their residential buildings, temples, aqueducts, coins, and influence cards and tokens. whoever has the most points wins! 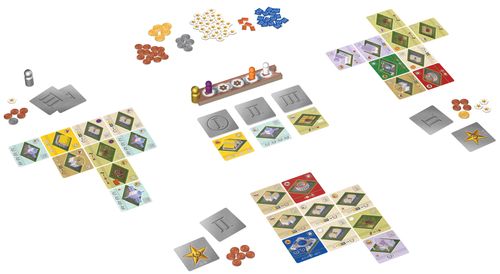 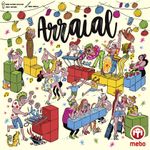 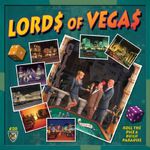 • U.S. publisher Pandasaurus Games has announced that it will release Arraial — a Nuno Bizarro Sentieiro and Paulo Soledade design that MEBO Games will debut at SPIEL '18 — in the U.S. in Q2 2019.

More and more deals for SPIEL titles are being announced prior to SPIEL itself, which I suppose is one way of ensuring sales for the licensed version. Don't bother carting that game back from Essen now because you can get it stateside from us in the future!