WizKids Fills Its 2019 Release Calendar with Warhammer, Waterdeep, and Much More

• U.S. publisher WizKids has announced the latest title coming from its partnership with Games Workshop, a 1-4 player design from Rustan Håkansson called Warhammer: Age of Sigmar – The Rise & Fall of Anvalor that's due out in April 2019. Here's a summary of both setting and gameplay:

Quote:
In the region of Aqshy, even if your uneasy allies place their resources in the perfect place, your mutual enemies can be strong and unpredictable. You'll build resources to block your allies from developing their strongest options, and they'll return the favor. They'll weaken enemies and you'll try to deliver the killing blow. Each turn provides many choices, so you need to pivot as you learn the strategies best suited to your common enemy as well as your allies. One thing's for certain — whether Anvalor survives the siege on it or not, things are sure to get heated!

In Warhammer: Age of Sigmar – The Rise & Fall of Anvalor, your official task is to help build and defend Anvalor together with the other factions.

• Other titles coming in 2019 from WizKids beyond the WWE-branded HeroClix and Dice Masters titles and items covered in this post include The Expanse Boardgame: Doors and Corners, a collection of five modules — Leaders, New Tech, Resource Tokens, Protomolecule, and Variable Setup — due out in February 2019 that can be mixed with the base game any way you like. As for what these modules do, here's an overview:

Quote:
Leaders go with fleets and can add influence when they move with a fleet. New tech allows variety and surprise in what powers are available because when a tech is earned, you have three random choices for that tech. Resource tokens can be spent in several ways, including helping to pay CP costs, adding up to 4 AP to a card, moving up the initiative track, and earning bonus points for having the most at final scoring. Protomolecule adds a new scoring opportunity. Variable set-up allows fleets and influence to be placed anywhere at the start of the game.

• Adam Porter's Thrown is far removed from his 2018 trick-taking game Pikoko, although trick-taking is what drives this new design as well. Here's what to expect in this January 2019 release:

Quote:
Thrown is a trick-taking game with a new way to play into a trick, namely by using dice! The colors of the dice represent the suits. The lead player rolls 1-3 dice of a color (the suit), then the other players try to roll in-suit to get the highest value on the table. If you do not have the right suit, then you can roll for trump; rolling a natural 6 on one of your dice in an off-suit will beat the highest value in-suit.

Winning a trick gives you gold. The game ends following a number of rounds played equal to the number of players, at which time whoever has the most gold wins.

But wait, there are cards in the game, too! These cards give special abilities which are paid for, or activated with, dice of particular colors. Some of the effects include flipping your dice or an opponent's dice to their opposite sides, removing dice, re-rolling dice, and automatically winning with a particular roll! 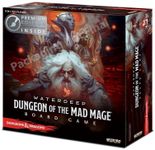 • You might recall a post from May 2018 in which I pointed out that WizKids was soliciting orders for the generically-named Dungeons & Dragons: 2018 Adventure System Board Game without saying much about what that game actually is. I think we finally have an answer thanks to more recent solicitations for Waterdeep: Dungeon of the Mad Mage, a Kevin Wilson design for 1-5 players that is planned for release in March 2019 in both a standard edition with 42 "single-color" miniatures for $80 and a premium edition with pre-painted miniatures for $160. As for the setting awaiting in this thick box, which can be combined with the other D&D Adventure System co-operative play board games:

Quote:
In the city of Waterdeep rests a tavern called the Yawning Portal, named after the gaping pit in its common room. At the bottom of this crumbling shaft is a labyrinth dungeon known as Undermountain, domain of the mad wizard Halaster Blackcloak, who has seeded his lair with monsters, traps, and mysteries. As an adventurer in Waterdeep: Dungeon of the Mad Mage, you plan to explore Undermountain in search for treasure while navigating numerous traps and ominous monsters.

Following in the path of the other critically-acclaimed D&D board games, Waterdeep: Dungeon of the Mad Mage features multiple scenarios, challenging quests, and gameplay designed for a single player or a cooperative group of 2-5 players. The game features new environment and bane/boon cards, as well as the trap and spell decks that premiered in Tomb of Annihilation.

• Kodachi is a May 2019 release from designer A. B. West and WizKids that has this high-level overview:

Quote:
In 12th century Japan, you rested after the Gempei War, retiring your ninjato sword, desiring a life of peace. But, once again, the ruling families call for your special skills to establish their honor. You will need stealth and strength, cunning and intrigue, and the swiftness of a Kodachi sword!

Clan tokens are gained by playing envoys and when the last clan token is taken, the player with the highest score wins!
• The final upcoming WizKids title I'll cover for now is Star Trek: Conflick in the Neutral Zone, which combines two familiar elements of the hobby game industry: Star Trek and disk-flicking games. Hmm, I just posted about the space-based FlickFleet from Eurydice Games the other day. Now people will have (at least) two options should they want a flicking game set in space!

This February 2019 release from Mike Elliott is for 2-4 players, bears a playing time of only twenty minutes, and plays as follows:

Quote:
Resource-rich planets have been found in the Neutral Zone, and both the Federation and Klingon Empire are out to exploit them!

In Star Trek: Conflick in the Neutral Zone, players flick discs representing the various ships found within the Star Trek universe, and these ships are used to collect resources or attack other ships. Collecting resources — that is, energy and command points — is accomplished by bringing a collector ship within range of an energy or command point planet.

To attack, you must use your attack ship to hit an opponent's ship off the planet or board. Successfully attacking an opponent awards a command point, but attacking isn't always easy as players can add in asteroids in order to block shots and protect their ships.

Your fleet can be expanded during your turn by purchasing more ships, which allows you to increase the strength of your forces and ultimately claim the planets for yourself.

As soon as someone claims ten command points, the game ends and that player wins. 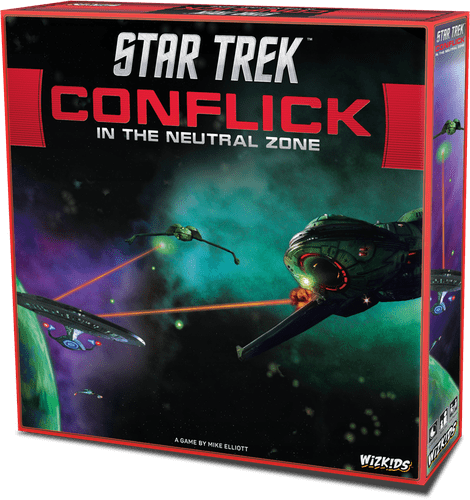