In 2019, Lookout Games Brings Grizzlies to Bärenpark, Roll-and-Write to Patchwork, and Card Play to Mandala

Near the end of SPIEL '18, I got a peek at three titles due out from Lookout Games in the first half of 2019, so naturally I thought I'd share what I know with you, dear reader.

Let's start with the original title of the batch: Mandala from Brett J. Gilbert and Trevor Benjamin, which from the short presentation I received seems like pure card game goodness. Here's an overview of what will be the latest title in Lookout's two-player game line:

Quote:
In Mandala, you are trying to score more than your opponent by collecting valuable cards — but you won't know which cards are valuable until well into the game!

Once a circle has all six colors of cards on it, you resolve the circle. Whoever has placed more cards on their half of the circle chooses all the cards of one color in the middle of that circle, then the other player takes all cards of a color, and so on until all cards have been claimed. If they have not claimed cards of this color previously, they place one of these cards in their lowest scoring area and the rest of the cards face down in a pile to be scored at the end of the game. The scoring areas are worth 1-6 points, so cards of the first color you claim are worth 1 point each, cards of the second color you claim 2 points each, etc.

Once a circle has been scored, players can start playing cards into it once again. Once the game ends, players tally the points for everything in their individual scoring pile, and whoever has the higher score wins! 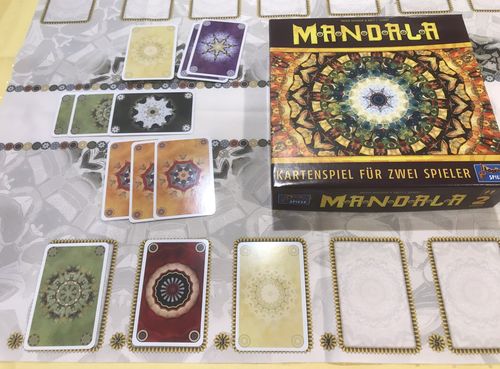 • Phil Walker-Harding's tile-laying game Bärenpark has been well-received and even more people would probably be buzzing about it if the game supply hadn't vanished along with Mayfair Games in late 2017. In any case, the base game has been reprinted by main publisher Lookout Games and is on its way to the U.S. Aside from that, Lookout is preparing an expansion that adds new elements to the game. Here's what to expect in Bärenpark: Die Grizzlies sind los! (a.k.a. "The Grizzlies Are Coming!"):

Quote:
Bärenpark: Die Grizzlies sind los! contains three separate modules that can be used individually or together with the Bärenpark base game.

One module contains a set of new goals that can be shuffled together with those in the base game.

A second module allows you to add grizzly bears to your bear park, with the grizzly bear tiles occupying six squares in a park section. That's quite a lot, isn't it? Well, to give your park room to grow, you now must add a fifth park section and fill it in order to complete the game. This expansion contains four new park sections, each with an exit gate so that visitors won't be stuck inside your park forever.

A third module contains skinny monorail tiles that start with a value of ten points and decrease in value as you add them to your bear parks. How does one add a monorail? First you need to place tiles in your park that each contain space for a pillar, and you need to place them at the proper distance. Once you have two pillars in place, you take the topmost monorail tile, then balance it on the pillars. Now everyone can scoot around your park looking down at the bears! 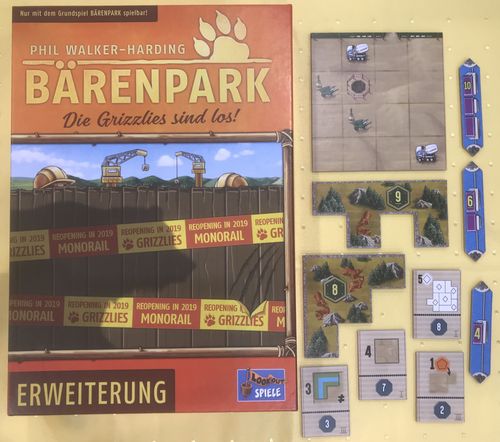 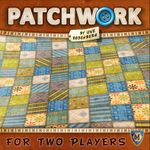 • The third title I saw should come as a surprise to no one who was paying attention to the trends of SPIEL '18. Uwe Rosenberg's Patchwork from 2014 wasn't the first title to use polyominoes, but that game's success has seemed like the origin point for many other such titles in recent years, including several such games at SPIEL '18. On top of that is a blitz of roll-and-write games, with every publisher seeming to have at least one in their catalog, some of which also feature polyominoes, as with the SPIEL '18 releases Bloxx! from Noris Spiele and Brikks from Schmidt Spiele.

Now Lookout Games will have a roll-and-write of its own in the form of Patchwork Doodle, which specifies that it supports up to eight players, but I think that's because the box will have only eight starting cards and pencils. Gather more writing utensils and allow for duplicate cards, and the player count is limited only by visual access to the cards in play. As for what you're doing in the game, which is due out in Q1 2019, here's a summary of gameplay:

Quote:
In Patchwork Doodle, each player has their own 9x9 grid to fill in over the course of the game. Each player sets up by drawing a unique polyomino card from the starting deck, then drawing that on their sheet.

In each round, players lay out a number of polyomino cards in a circle, then place the rabbit between two cards. On a turn, someone rolls the die, moves the rabbit forward, then removes the card indicated by the rabbit. Each player must draw the polyomino indicated on this card in their grid. Once a certain number of cards have been played, the round ends, players score points, then you lay out more cards for the next round.

Each player has four special actions available to them during the game: You can choose to draw the card before or after the chosen card, you can cut a polyomino into two pieces before adding each piece to your grid, you can fill in a 1x1 space in your grid, and you can do one of the above actions a second time. When you take one of these actions, you mark it off as each can be used only once (except for the one you use a second time, if you know what I mean).

You lose a point for each space that you don't cover, so try to pack everything in as tightly as possible! 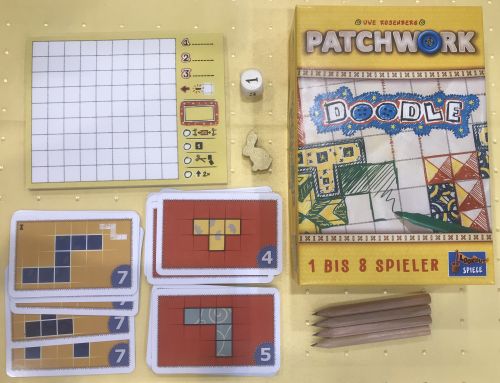 Components not final here either