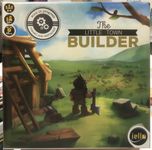 • While at SPIEL '18, Robin Houpier from IELLO ran me through some of the titles they plan to release in 2019. Note that many of the games shown in this post do not have final graphics, and in many cases I'm giving only a sampling of the gameplay. BGG plans to be at the Festival International des Jeux in Cannes in February 2019, and by that time IELLO will be releasing some of these titles and have final or nearly-final versions of others that we can preview in more detail.

For now, though, we have overviews, as with this new version of Shun's Little Town Builders, first released in Japan in 2017 by Studio GG. The Little Town Builder, as this version is tentatively titled, features the same gameplay as the original release:

Quote:
In Little Town Builders, you lead a team of architects and must dispatch workers to the town, collect resources and money, build buildings, and develop this little town.

In the game, which lasts four rounds, you can acquire resources such as wood, stones, fish, and wheat from the surrounding squares by putting workers on the board, with three workers being placed each round. When you place a worker, you acquire the resources available in all eight surrounding spaces. You can build buildings by using these resources, and you — or any other player — can gain the effect of the building when place a worker next to it; if you place next to a building owned by another, however, you must pay them a coin before you can collect those resources. 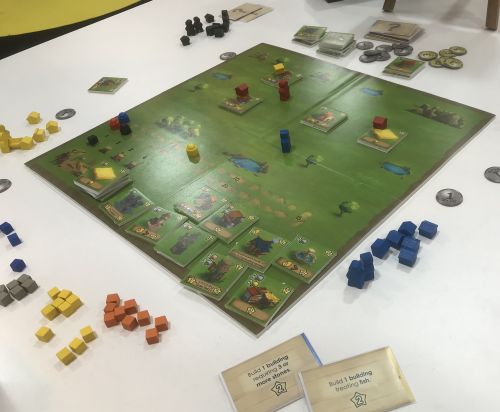 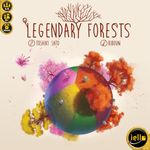 Legendary Forests is another JP design being reworked by IELLO for a new edition, with the original release having been Toshiki Sato's 8bit MockUp from his own Sato Familie brand in 2017. This design won a "Best Game" award from voters at Tokyo Game Market in December 2017. My description below is for the original game, but it's applicable to Legendary Forests as well if you replace "monument" with "tree" and make other word replacements

Quote:
8bit MockUp is a multiplayer solitaire game akin to Take it Easy! or Karuba as each player has an identical set of tiles and plays the same tile at the same time to their own tableau — but where each player places each tile may differ...

In more detail, each player creates their own world by connecting the landscapes on their tiles. Each player starts the game with the same starting tile in play. One player, the "Leader", shuffles their tiles face down, then removes five tiles from play without looking at them. On a turn, the Leader reveals the next tile, calls out the number on it, then everyone places that same tile somewhere in their landscape, with the adjacent edges of each pair of tiles needing to match.

When the Leader draws a tile with a red number, everyone places their piece, then starting with the player who holds the God piece (initially the Leader), everyone draws a monument tile from the center of the playing area and places it on an area in their landscape. Monuments come in three colors (while the landscapes have areas in four colors), and you use only two monuments of a color for each player in the game. After placing monuments, pass the God piece clockwise to the next player.

The game ends after everyone has placed their twenty tiles, then players score points based on the areas where they have monuments. Each non-purple edge of a tile has a half-circle on it; when two such edges are placed together, the owner of those tiles has created a "cookie" in that area. To score, you look at each area where you have a monument. If you have no half-circles in this area — that is, the area is completely enclosed — then you score 2 points for each cookie in that area. If you have any unconnected half-circles in this area, you instead score 1 point per cookie. Whoever has the most points wins! 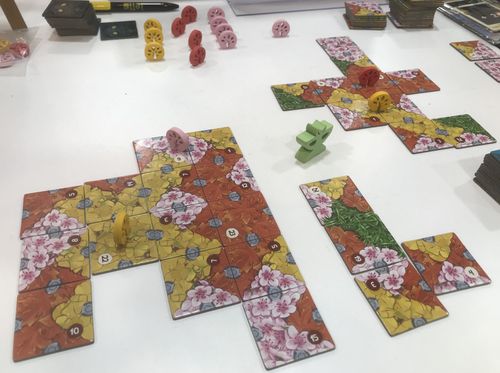 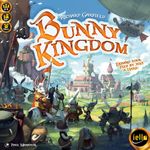 • Richard Garfield's Bunny Kingdom will expand to new realms in February 2019 with the release of the Cloud Kingdom expansion, which includes new cards, new types of resources, a set of playing pieces that allow five bunnies to play in the same game, a larger type of building that increases your influence in that area by a factor of five, and a new game board to the world of Bunny Kingdom that allows you to link fiefs in the sky with those on land. 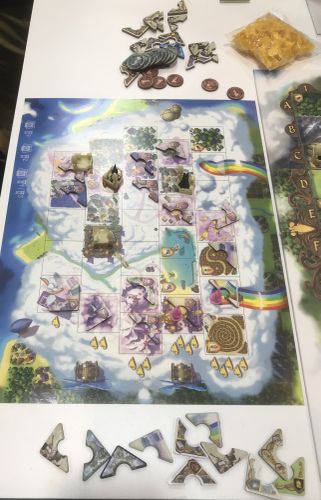 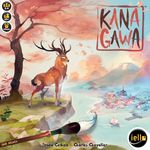 • Another expansion in the works is Kanagawa: Air for Bruno Cathala and Charles Chevallier's Kanagawa from 2016. This expansion includes cards and scoring elements for three new elements — kites, parasols, and paper lanterns — and to use them, you replace any two elements in the Kanagawa base game with two new elements.

Some of the cards in this expansion include a yokaï symbol that is visible whether you place the card in your painting or in your studio. When you place such a card, you take a yokaï marker from the reserve or from another player, and if you collect all three such markers, you receive a reward. You hope that someone else will claim them later, though, because players with yokaï markers at the end of the game lose points. 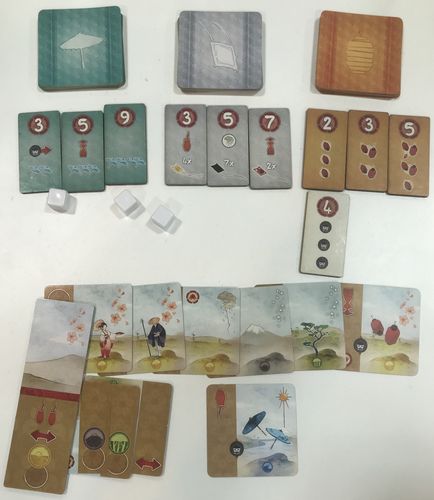 • Polyominoes were in vogue at SPIEL '18, with polyomino roll-and-writes being at peak trendiness, so IELLO was on point with its Topa Topa prototype, which puts its own twist on the genre by having players draft cards that they draw on their individual player board. The game lasts three rounds, and in each round you score for completing levels, using different shapes in your area, and doing other things as well. Coins allow you to break the rules for drafting and drawing.

• At SPIEL '18, IELLO debuted its video game simulation system 8Bit Box, and in its press area it showed off 8Bit Box: Double Rumble, an expansion in development meant to simulate the fighting arcade games of old. In the game, players need to confront the bad guys facing them, either in a solitaire game or playing co-operatively with one other player, in order to defeat the boss at the final stage of the game. 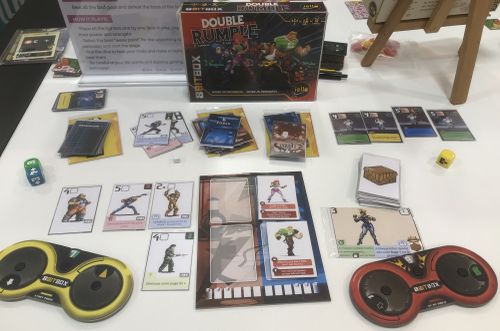 • High Risk, a 2-4 player game from Trevor Benjamin and Brett J. Gilbert, wasn't on display in the IELLO press room, but the game was included in its catalog and press file, so here's the little that I know about it:

Quote:
In the press-your-luck game High Risk, you want to move your climbers up the mountain at the right pace without getting greedy and risking a fall... 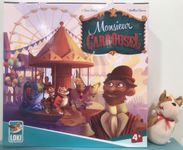 • The final title on the IELLO docket is actually a title from its kids' game line LOKI, with Monsieur Carrousel being a Sara Zaria design (or perhaps a Sara Faria design depending on how you read the typeface) that will debut at the FIJ 2019 in Cannes in February. Here's what happens when you take the game for a spin:

Quote:
Each turn in Monsieur Carrousel, the active player rolls the colored die. If a space of this color is open, you place a child disc in this space, with everyone trying to remember which object is under which child.

You then spin the carousel. If the child ends up on the yellow half of the game board, you pick up a yellow stick — representing a ray of sunshine — and place it in a trough on the board; most troughs need two sticks to fill, and if the stick doesn't fit the space exactly, then you place it back in the reserve, so pick carefully! If the child ends up in the gray half of the game board, then you instead add a raindrop to the board.

If you roll a color that has children in both spaces on the wheel, then you spin the carousel. If the clown on the game board is now pointing at a child, then you must successfully state what's under this disc. If you do, place a sun stick; otherwise place a raindrop. The game ends when either the sun comes out fully or rain covers the sky! 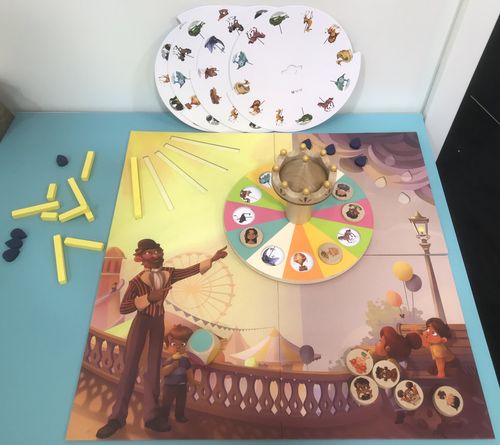