• As I noted in my SPIEL '18 post-mortem in late October 2018, multiple game publishers suffered thefts during that show, with the leaderboard likely being topped by Japanime Games, which lost more than $10,000. Other publishers that were hit by what appears to be a single band of organized thieves are Artipia Games, Folded Space, Gotha Games, Greenbrier Games, and Hub Games. Here's part of a press release from Japanime about the thefts;

Quote:
Over the course of the four-day event, at least six small companies were targeted in various ways and suffered losses of cash, product and personal effects. One individual was apprehended in connection with a particular event, but the cash had been taken by an accomplice and there was no recovery. Although security at the show and the Essen police were notified, there was not much recourse to take and to these companies, often run by families, friends or even individually, these are heavy costs to bear.

In total, these six companies listed below lost more than $20,000, although totals are not final. These are small to medium sized companies, run by a handful of individuals, often just family and friends in some cases. SPIEL is a year-long preparation process, and the profits from this show are sometimes the life's blood for the company, allowing them to continue creating and publishing the games their customers love.

Recovery efforts are underway. All the companies agree that the largest concern is bringing to light the need for changes and improvements in SPIEL's security, but recouping these losses follows closely behind.
You can read individual stories from these publishers, as well as a series of responses from SPIEL organizer Merz Verlag, on the Japanime Games website.

To make up from its loss, Japanime Games is running a "Robbery Recovery" effort in which supporters can donate funds to the company in exchange for "thank you" gift packages. Artipia Games, which had its entire cash register stolen, is running a special Kickstarter campaign — "A Fair, a Robbery and a Promo Pack" — that contains six theft-related promos for six of its titles and that ends on Thursday, Nov. 15, 2018. 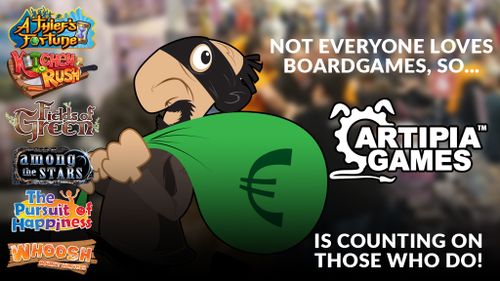 • Old news, but in July 2018 Steve Jackson Games CEO Phil Reed noted that the company was "evolving" and "adapting" in response to the current marketplace for mainstream and hobby games, and Reed's statement about that marketplace will likely feel familiar to all publishers, designers, retailers, and distributors throughout the world:

Quote:
From the gamer's standpoint, we are in a Golden Age. The combination of crowdfunding and low minimum order requirements at factories means that more and more new creators are releasing their own games. And some are very good, no mistake about it! Others, not so much. Some Kickstarter projects vanish after funding, and some produce a pretty product with no play value. But customers and retailers can't tell which is which until it's too late.

This has led to a situation over the last year or so in which the "New Releases" shelf is swept clean every week or two to make way for yet newer material. Unsold inventory increases at the retail and distribution level, and that expense inevitably rolls back on the publisher.

This has affected the market in two noticeable ways: many older games are selling fewer copies, and publishers have to print smaller numbers of new games because of how quickly they become "old." This leads to a treadmill effect in which a publisher tries to release more and more games while spending less and less on each one. That's bad for both the publisher and the gamers.

Rather than join this treadmill publishing model, we are choosing to strategically adapt by putting more focus and support on our core franchises/titles while limiting new title releases until the correct market environment presents itself. Unfortunately, this also means reducing staff, cutting down overhead expenses, and limiting our presence at conventions, so we can focus on what we do best — create the games our fans have enjoyed for decades.
Some of the staff left go by SJG have already found positions elsewhere in the game industry: marketing director Rhea Friesen joined CMON Limited as Director of Marketing in August 2018, Hunter Shelburne is now with Pandasaurus Games as of September 2018, and press and retail liaison Ariel Barkhurst is now Marketing Manager at White Wizard Games as of October 2018.

For other changes in how SJG operates, you can compare its introductory project on Kickstarter in 2012 — a giant new version of OGRE that netted more than $900,000 and launched all kinds of spin-off projects — to its 2018 slate of eight Kickstarter projects. The board game Triplanetary, which had its first new edition in 35 years, had 866 backers, with the remaining stock of the game pushed out to distributors. SJG has no more stock in reserve, so once retailers sell through, the game will be unavailable once again, an exemplar of the modern game market in which, as Reed describes, "publishers have to print smaller numbers of new games because of how quickly they become 'old'". Better to apologize to people for being out of stock than to stare at a warehouse full of boxes because banks don't accept apologies for payment! 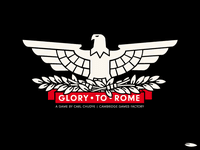 • Speaking of running out of money, in September 2018 Cyrus Farivar published a long history of Glory to Rome and the fall of publisher Cambridge Games Factory on Ars Technica. This is the standout paragraph for me:

Quote:
The problem was that while [CGF's Ed] Carter may have known something about retail, he knew next to nothing about the logistics of game printing, shipping, and customs. "Ed wanted to do something that was completely different," [CGF's former general counsel Christopher] Rao added. "He said that all games will come with worldwide free shipping. I don't know if it's immediately obvious how big of a headache that is. We were sending games to Singapore and to small eastern European countries and stuff like that. So it's tricky. There's different import export laws in all of those countries."
To tie back to the previous item, Steve Jackson Games is currently running a Kickstarter project for Munchkin Steampunk: Girl Genius, with one of the achieved stretch goals being a Munchkin coin that features Phil Foglio's artwork. Multiple people have complained in the comments of that KS that the coin doesn't feature Girl Genius lead character Agatha Clay:

Quote:
Furthermore, I for one, would happily wait another year to get a coin with Agatha on it to tie it to this kickstarter. Would it be rude to ask for it to be put to a vote? Delay the coin, to have a Girl Genius themed image on the coin that we got with our Girl Genius Munchkin set?
Quote:
...it's not out of the realm of possibility that you could ship the rest of the project, then stick the correct coin in an envelope and mail it out a year later. I think most of us would be quite satisfied with that.
SJG CEO Phil Reed has had to quash such requests repeatedly: "This would balloon costs. Shipping, as we've made no secret, is an expensive nightmare these days. And simply mailing a coin sounds easy, until you find yourself mailing them and running into postal headaches."

What's the easiest way to throw money away for no gain whatsoever? Doubling the number of mailings required to complete a project. Thankfully some companies do know "the logistics of game printing, shipping, and customs"... 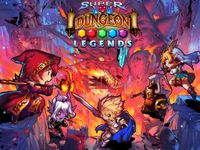 • ...while regrettably some companies do not, with the most recent example of this being the Super Dungeon: Legends Kickstarter project from Ninja Division and Soda Pop Miniatures. This project funded in November 2015 with nearly $1.3 million in support and with an estimated arrival date for rewards of December 2016, but nothing has been delivered to date.

Sometime in 2018, KS backer Zach contacted the Washington State Attorney General's Office about this campaign — the Washington State AG having had some success with suing Kickstarter campaign creators for not delivering on promises — and on Nov. 11, 2018 Zach noted that in October 2018 he had received a response from Soda Pop Miniatures to his complaint. He posted this response publicly (PDF), and here's the most relevant section for KS backers:

Quote:
Initial Funding was able to cover initial development as well as the company's annual overhead for the end of 2015 and all of 2016. However, the project changes and additional development required (as outlined above) required us to use remaining funds towards our annual overhead for 2017, essentially exhausting the funds earned from Kickstarter. While also not being able to bring the product to market for 2017 retail sales.

With a significant amount of the project's development complete, the majority of production was expected to begin in November 2017, which we communicated with backers via an update. [10] The products that we were able to complete development of during 2016 - 2017 were shown in an update to backers in early 2018. [11] Unfortunately, the funds we anticipated to have in place in order to begin manufacturing did not materialize.

With the Kickstarter funds expended it was upon us to be able to self fund the necessary cash needed to complete the project. The remaining estimates for completion of the project are shown below.

Raising the funds needed was attempted (and continues to be attempted) through profits of non-Super Dungeon projects as well as outside investor funding.

To date we have still not been able to secure funding for the approximately $750,000 needed to complete the project. However, we continue to work diligently in an attempt to find the funds.