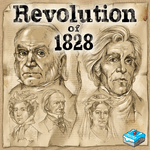 Non-final cover
• At SPIEL '18, Matthias Nagy from German publisher Frosted Games gave me a quick overview of a few upcoming releases, and now one of those titles has been announced more widely, with Renegade Game Studios handling the North American release of Revolution of 1828, a two-player game from Stefan Feld that will be out in early 2019 in Europe and in April 2019 in the U.S. Here's an overview of this chip-drafting game that plays out in 30-60 minutes:

Quote:
It is 1828, and the time for elections has come around again in this newly-formed democracy we call the United States of America. John Quincy Adams and Andrew Jackson are the candidates vying for the people's votes. For the first time in history, this grand campaign is also fought on the pages of newspapers and in front of an eager public audience. This was an election that found its way into history books with its yet unseen ruthlessness and malevolence. This was America's first smear campaign.

In the two-player game Revolution of 1828, you are trying to become the next President of the United States! To reach this lofty goal, each player tries to take the election tiles that suit you best and hinder your opponent's campaign. Election tiles allow you to garner the allegiance of electors and use the power of smear campaigns to skew the populace in your favor. If you also use the powerful campaign actions to your advantage and have the press look the other way, nothing should stand in your way!

Gain the most votes by the end of the game and start your work as America's seventh President! 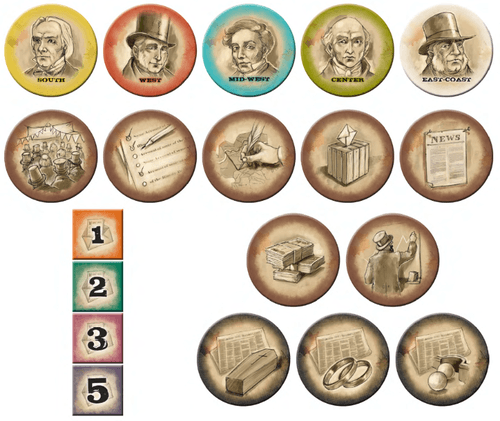 • U.S. publisher Pandasaurus Games has announced the dark-sounding Dead Man's Cabal from Daniel Newman for release in June 2019, noting in its press release that this design "is one of our favorite games that we have ever published", having signed the game in mid-2016 and developing it over the previous two years. As for who you are and what you're doing in the game:

Quote:
You've conquered death and mastered all nine dimensions of space-time. Reality bends to your every whim and desire. You are the absolute best there ever has been, a necromancer at the top of their game. The only downside is that no one likes you on account of the creeping around with dead bodies and the lack of sunlight. But who needs friends when you can make them?

In the mid-weight strategy game Dead Man's Cabal, 2-4 players compete to bring the dead back to life so that they can throw a party with actual, you know, guests.

The gameplay is a clever interplay of a unique action selection mechanism that allows players to choose both a private action followed by a group action, requiring tense decision-making on the timing of the different phases of the game. Collect bodies, crystal skulls, and runes, then bring the dead back to life. This might sound simple enough, but triggering the actions in just the right order requires careful planning to make sure you aren't helping your competitors more than yourself. 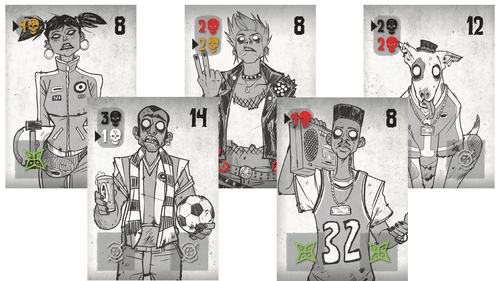 • German publisher Edition Spielwiese has shared initial details of two releases scheduled for Q1 2019, one being a flip-and-write polyomino-style game in its Cottage Garden-line from designer Uwe Rosenberg titled Second Chance. Stronghold Games will release this title in North America, which is somewhat amusing since in Q1 2019 it will release Vital Lacerda's CO₂: Second Chance. A crossover title would be wacky and hard to imagine!

I have no artwork to share for now, but this description should give you enough to go on:

Quote:
In Second Chance, each player starts with a 9x9 grid that they want to fill as completely as possible. To begin the game, everyone receives a different card with a starting tile and marks off its spaces on their grid.

Every turn, two puzzle tile cards are revealed, and each player chooses one of them, then marks off squares on their personal grid that match the shape of the image shown on their chosen card. Multiple players can choose the same card. If a player cannot fit either revealed shape into their grid, they get a second chance (wink, wink) and reveal one card from the deck just for them. If they can fit this shape in their grid, they do continue normally next round; otherwise they are eliminated from play.

The game ends when all players have been eliminated, the deck of puzzle cards has run out, or a player has completely filled their grid. If someone has filled their grid, they win. If all players have been eliminated or the deck ran out of cards, then whoever has the fewest empty spaces wins.
• The second title coming in Q1 2019 from Edition Spielwiese is Subtext, a party game for 4-8 players from designing wünderkind Wolfgang Warsch. Here's all the description I have for now:

Quote:
In Subtext, players try to communicate with one another by drawing hints about the word on their card. Drawing well is not required — just being clever in selecting your hints.

Each round, one person is the dealer. This player looks at their word, then shuffles the card into the cards for the other players and distributes them randomly. By doing this, one player will have the same word as the dealer, but nobody — not even the dealer — knows who it is. The dealer then draws a picture, and you want to hint at your word so that ideally only the person who has the same word will understand what you're depicting. In the subsequent guessing phase, all players (including the dealer) guess which player got the same word as the dealer. Points are awarded based on the number of incorrect guesses, but the dealer and their partner have to guess correctly to even get points. How vague do you want to be in your drawing efforts to still get your message across without anyone else knowing it?