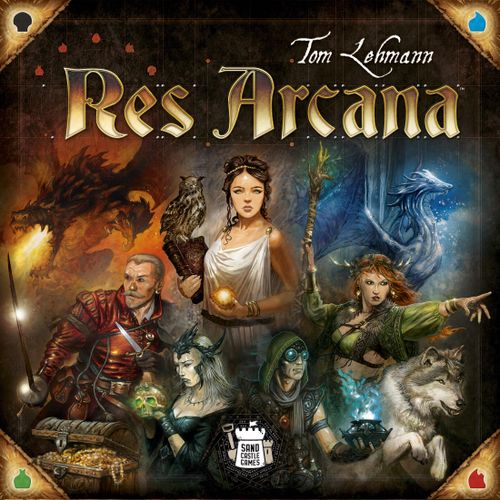 BGG.CON is pretty much the only game convention at which I actually play games. Sure, I might play a few things during Gen Con, SPIEL, or some other show, but for BGG.CON I make no appointments and plan little aside from having a game or two on hand that I want to push on others. (One of those games isn't even in the database right now!)

That said, I often end up doing work at BGG.CON anyway as I gravitate toward playing prototypes and advance copies of games that are due to hit the market in the months ahead. Okay, your definition of "work" might not include playing games, but if I don't play, then I can't do a decent job previewing, so yes, playing is work!

One of the prototypes I got my hands on was Tom Lehmann's engine-building, deck-management, and resource management game Res Arcana, the debut title from Cyrille and Maud Daujean's Sand Castle Games that will see release in February 2019. I had published a summary of the setting in October 2018 that left a lot to the imagination:

Quote:
In the four corners of the world, the sky is covered with clouds, the oceans change color, the atmosphere crackles with magic. In the dim light of an alchemical laboratory, on the snowy summit of a sacred mountain, in the depths silent of a corrupt temple, powerful mages prepare for confrontation.

They harvest, handle, and consume the essences that make up the magic of the world to create mysterious artifacts. As they bring out strange creatures from the void, they conquer terrible places of power and invoke gigantic dragons to defeat their opponents!

In Res Arcana, you'll get to do the same...
Okay, not much to go on there in terms of gameplay, so let's fill in the blanks. Res Arcana is a game for 2-4 players that takes about 10-15 minutes per player, although that playing time is misleading because as with the potato-chip goodness Race for the Galaxy, you will undoubtedly want to play multiple times each session.

Each player in Res Arcana starts the game with a deck of eight cards, drawing three of them at random for their initial hand, and a mage card, each of which has a unique power. In reverse player order, each player drafts a magic item from the reserve, with these items mirroring the power of all the mages in the game, although typically in a worse way since it's better to be an alchemist than to rely on a book of alchemy — or so I've been told.

At the start of a turn, everyone collects resources generated by their cards and optionally removes resources located on their cards, adding all of this material to a personal resource pool. Then, starting with the round's first player, each player takes one action in clockwise order until all players have passed and the round ends. The actions are:

Once you pass, you're out for the round. You straighten all your cards, draw one card from your deck, swap your current magic item for one in the reserve pool, and (if you're the first one to pass) claim the first player marker, which adds 1 victory point (VP) to your score while you hold it.

So that's the overview of a round, but what you are actually doing? Racing for points, with the game ending the round that someone has at least 10 VPs, with whoever has the most VPs winning. Some of the cards in your deck will be worth VPs if you have them in play, but most of your points come from the monuments and places of power you acquire, with those latter cards often having a variable value depending on what you do with them.

Now let's wind back to the beginning of this description and get a little more detailed. When you first play, you can take one of four designated mages and a starting hand of that mage's three specific cards, along with a deck of five random cards. As in Race for the Galaxy, this combination of cards nudges you along a certain path during your first turn, easing you into the game and giving you some kind of footing for the mystery of whatever comes next. Once you've played this way once or twice, you can move to having a deck of eight random cards, with you surveying these cards, then choosing one of the two random mages dealt to you. With more plays under your belt, you might decide to draft your starting deck of eight cards, which increases the possibility of you (and others) having good combos while also letting you know some of the cards you'll be facing.

Res Arcana includes five types of resources: gold and four others with names I don't recall, so I'll refer to them as black, red, blue, and green. You start with one of each, and you'll need more during play in order to play cards from your hand and acquire things. Conveniently, you can discard any card for gold or two resources, with discarded cards being cycled back into your deck once it's empty. Your deck consists of exactly eight cards, and those cards will always be in the deck, in your hand, in play, or in the discard pile, with nothing added or lost during play.

While your deck can't be messed with, your resources can be, with opponents sometimes forcing you to discard resources (possibly only green ones) unless you can prevent the attack. An opponent might grant your resources as well, giving you something in the process of them getting even more than you. I had a card that gave me blue based on however much red was held by one opponent, so I had to try to guess who was doing what when in order to maximize blue that I would then transmute into something else, then I would spend on an artifact, etc. 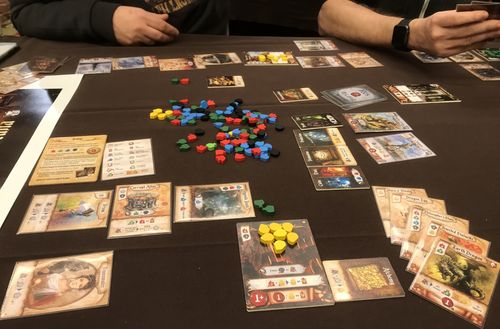 Post-mortem after my second game

Monuments and places of power are up for grabs to whoever gets there first. All the monuments cost four gold, and whenever you buy one, you can take either of the two face-up cards or the top card of the deck. Each monument is worth 1-3 VPs (from what I've seen) and has a special power.

The game includes five double-sided places of power, and you have access to only one side of them each game. Once you pay the cost for one, you place the place in front of you, then you can use it like any other item you have in play. In the image above, I had something that required me to pay black at the start of each turn or else it would tap and be unusable. By paying two red and one gold, I could place a gold on the tile, increasing its value by 1 VP, and I could do this as many times as I wanted, although each use would be a separate action. Paired with that, I had a Corrupt Altar that let me convert two green into three red (although I wouldn't get the red until the start of the next turn) as well as a Prism (that would convert one resource into any two non-gold resources or any number of resources into the same number of non-gold resources), with the Transmuter being my mage of choice for more conversion, netting me an additional one non-gold resource in the process. (I hope the rules contain a general term for non-gold resources; if not, we'll have to create one!)

Looking at the other cards in my deck, I now realize one way (out of possibly many) that I goofed. The Horn of Plenty costs two gold, but can then generate a gold each turn. (I believe it also has a secondary effect that I don't now recall.) Cyrille and another player had gunned their engines, so I didn't think I'd have time to make good use of the Horn, so I ditched it for a short-term gain, but I missed that my Corrupt Altar allows me to sacrifice one of my artifacts to recover its cost along with two additional non-gold resources. Boo! I could have had my gold and spent it, too.

In the final turn, I spent everything, boosting my score from 2 VP to 8, but the winning player had 12, so I wasn't yet in striking distance despite having (what I possibly mistakenly thought) a decent engine in play. 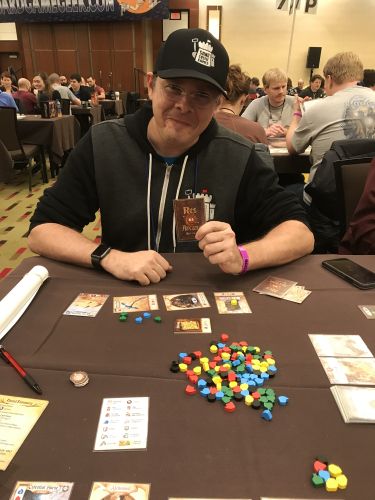 Cyrille poses in place of my opponent,
who works for another publisher and wanted to stay anonymous

I played Res Arcana twice, once with two players and once with four, and the four-player game was rougher in that monuments kept disappearing (to the benefit of others) and the places of power were almost gone when I finally acquired one. Cyrille and A. were experienced players, though, and didn't seem to waste an action as they zoomed ahead of me and the other new guy. I can definitely see players becoming as familiar with the cards in this game as they are in Race, imagining the possibilities of comboing this, that, and the other thing, seeing how it all plays out, then shuffling again immediately for the next game.

And when the inevitable expansions appear...