App News: Evolution set to adapt to our touchscreens on February 12

Evolution coming to iOS, Android, Steam on February 12
With a development schedule that's lasted almost as long as the second voyage of the HMS Beagle, North Star Games has announced that their digital adaptation of Evolution is set to arrive on February 12. 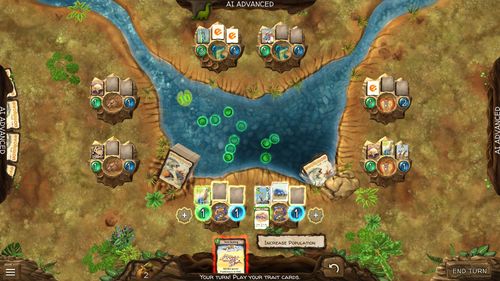 The digital version will be for iOS, Android, and on Steam (where I believe it will be for both Mac and PC). If you're wondering why development took so long, it's because North Star wanted to make Evolution the board game app that all other apps are compared to. Looking at what's included, they might have succeeded:

North Star wrote:
Inspired by the award-winning tabletop game, Evolution retains the elements which made the analog edition so popular with more than 1.6 million players worldwide, but offers a swift pace and features only possible in a modern video game. Meticulously designed so even those who are completely unfamiliar with the original board game can jump in right away, the digital release features a learn-while-you-play tutorial, exciting campaign mode with Apex Species opponents to test your wits against, and cross-platform multiplayer that effortlessly matches players with others of similar skill.

Create new species and adapt them for survival in an ever-changing environment, brought to life with a beautifully hand-painted, watercolor art-style and an earthy, contemplative original soundtrack. Combine different traits rooted in science, such as a long neck or a defensive shell, in limitless combinations to help creatures thrive in the fight for survival over scarce food resources and defense from deadly predators. Develop symbiotic relationships or even evolve carnivorous traits and feast on foes in this addictive turn-based strategy game.

Take survival of the fittest online and square off against live opponents around the world in fully cross platform, skill-based matchmaking. Rank up from a field researcher all the way to a Nobel Laureate in the progression system. Test yourself against others in the ongoing seasonal tournaments. Turn-based and simultaneous play options allow for fast and fluid multiplayer games in under ten minutes.
I've had a chance to play the game (as has everyone who's gone to Gen Con the past 2 or 3 years) and it plays and looks great. I'm really looking forward to jumping into the single player campaign and losing terribly in the seasonal tournaments.

One thing not in the game at launch will be asynchronous play. I'm told that it will be coming shortly after launch via an update, but it won't be in there on day one.

Take a look at the trailer and we'll have a release post up and ready for Feb. 12 to remind you.