U.S. publisher Rio Grande Games is going through something of a renaissance right now. Over the past few years, the company has released only a few new games — mostly Dominion titles and Tom Lehmann designs — having shed the co-publishers and licensed titles that constituted most of the titles it released throughout the 2000s.

Now Rio Grande is continuing the partnerships that remained, adding new licensing partners to the line-up, and releasing a wider range of original titles. Ken Hill, who was hired as production manager in Q4 2018, detailed some of the changes underway, while also giving an update on some of the titles hitting the market from RGG in the first half of 2019.

• To start, Lutz Stepponat's Gambit Royale — an English-language version of
2018's Kabale und Hiebe: Setzt dem Ganzen die Krone auf from German publisher LuPri, which is itself a revamped version of the 2006 title Ruse and Bruise — was released in December 2018, along with Tom Lehmann's New Frontiers (which the designer covered in detail in this development diary on BGG News).

• Mac Gerdts' Concordia Venus, which debuted from PD-Verlag at SPIEL '18 as both a standalone game and an expansion for the Concordia base game, reached the RGG warehouse in mid-January 2019 and should be available at U.S. retailers by the end of the month given the one- to two-week turnaround time needed for receiving, re-shipping, and handling via distribution. The Cyprus game board that's unique to the standalone game and not included in the expansion will be available later in 2019 paired with a new map yet to be announced, according to a PD-Verlag representative, and Hill verified that RGG will also release this double-map expansion in the U.S.

• Vladimír Suchý's Underwater Cities was another SPIEL '18 release, this time from newcomer Delicious Games, and Hill anticipates having this title available on the U.S. market before the end of February 2019. He notes that this version incorporates a few production improvements such as thicker player boards, and based on preorders he anticipates placing a reorder for this title as soon as it reaches stores.

• Another February 2019 release is Wei-Hwa Huang's and Tom Lehmann's Roll for the Galaxy: Rivalry, which I covered in detail here. 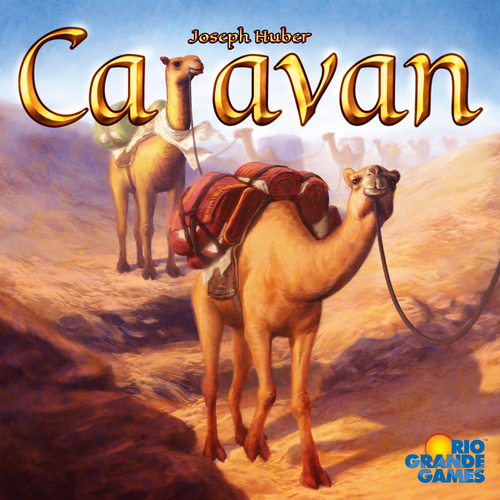 • In terms of non-Lehmann new releases, Joe Huber's Caravan is due out in March or April 2019. This 2-4 player game sounds delightfully minimalist, and I offer this summary of the setting and gameplay:

Quote:
1300 A.D., Western Africa — the desire for goods such as ivory in Europe drives the development of many trade routes here, with caravans of camels delivering goods across the desert landscape.

In Caravan, players must use their camels to deliver goods where they are wanted. Each player starts with five camels in their color (or six in an introductory game), and the game board is seeded with eight goods on the spaces numbered 1-8, with demand markers placed on the goods at spaces 1, 2, 7 and 8. The first player in the game takes one action, the second player two, and so on until someone takes four actions, after which each player can take up to four actions on their turn. Actions are:

If you move a good to a camel located in the city that wants that good (as indicated by color), then you remove that good from the board and keep it. As soon as four goods have been picked up (not necessarily delivered), pause the game and place a demand marker on each good still on the board; in addition, refill the empty numbered spots with a good from the bag.

Once the final four goods have been drawn from the bag, the game ends immediately following the next delivery. Players score points based upon what they've collected: Rare goods (of which there are three each of four types) are worth 6 points each; common goods (nine each of four types) are worth 3 points each; and each demand marker is worth 1 point. Whoever scores the most wins.
• A much larger game in the pipeline is Alan D. Ernstein's Nevada City, which Hill says they've been working on for more than three years. Hill adds, "The basic game is a nice twist on the worker placement genre, with an interesting market mechanism and some other fun mechanics. We packed a lot in a 90-minute game but not too much." Here's an overview of this 2-4 player game, which will debut in Q2 2019 no later than the 2019 Origins Game Fair:

Quote:
You and your family have come to Nevada City to set up a homestead and help the town grow. Will you be able to outperform the other homesteaders?

Each player in Nevada City starts the game with a nuclear family — mother, father, daughter, and son — and a homestead mat where you can establish farms, fence in livestock, and develop silver mines. You start the game with one mine, one farm, and one ranch, along with some money and an assortment of commodities. The town consists of a few buildings, and other buildings will become available for construction as the years advance, with the game lasting four years.

A year lasts a number of turns until all players have used all of their characters and hired workers. On a turn, a player chooses one of their characters and takes actions until all of that character's actions are spent; a character can't take the same action during a turn. A character can buy new property from city hall; mine, farm, or ranch their own property; claim a building; construct a building; use an existing building; reserve a contract that has conditions for improving the city; or work to fulfill that contract. Each character and worker has a different set of skills that can boost the actions they take, such as finding additional silver in a mine or bringing lumber to a construction site.

You earn victory points (VPs) for constructing buildings, in addition to fees from those buildings when other players use them. You earn VPs for completing contracts as well, with those contracts having different values depending on which buildings are in place at the time. Each player receives a private goal card at the start of the game, and all players score points for these goal cards based on how well they do relative to other players, so pay attention to their choices.

Each year, various events pop up, leaving players to suffer drought or reap the benefits of fertile land, among other things. At the end of a year, workers leave unless you marry them into a family, which will require spirits and other resources.

Nevada City also includes advanced rules that add additional buildings and events to the game, a gambling subgame of sorts, a more volatile production market to make life in the West less predictable, and extra sons and daughters. On top of all that, the unhired workers at the end of a year get rowdy and start shooting up the town, so you need to use your gunslinging abilities to bring them to heel and try to avoid getting wounded since you might lose out on a character's abilities in the subsequent year.
• Aside from these titles, Hill says, "We're going to be actively going after partnerships again, and I'm on the prowl for other titles." In addition to at least one more title due in Q2 2019, other games currently in the RGG pipeline include an Andreas Steding design (due out at SPIEL '19), an Arve D. Fühler design, a two-player title from Phil Walker-Harding, and two designs from Daryl Andrews. 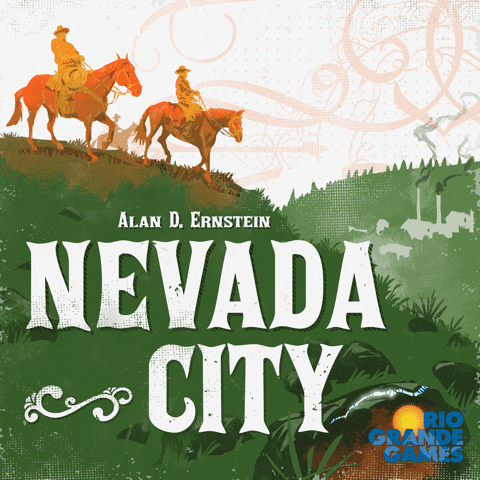