App News: Dire Wolf Digital bringing a slew of awesome games to digital, Qwixx gets and update, and we get Randomized

Dire Wolf Digital just went bananas
I know we've been really quiet for the last few weeks but that wasn't our fault. You see, there just isn't a lot of news to talk about in January. Honestly, we've been in the digital board game doldrums for a bit. That ended today courtesy of Dire Wolf. This isn't just a light breeze to get us moving, however, it's a damn hurricane. Hold onto your hats, as Dire Wolf's announcement is about to blow up your digital board game world.

First of all, one of the most requested digital ports is finally going to happen. That's right, Mage Knight Board Game from WizKids is coming to your tablet. This is probably the greatest solo game ever crafted and the digital version is something I've been hoping for since I first played the game.

Next, we have the 2018 asymmetrical darling, Root from Leder Games. Cute, cuddly animals ripping each others throats out. Should be awesome.

How about something more peaceful? Like building stained glass windows with a digital version of Sagrada from Floodgate Games.

Maybe you want something a little more eurogamey? How's about Yellow & Yangtze from none other than Reiner Knizia. I don't know much about this one, but it's Knizia and a follow-up, of sorts, to Tigris & Euphrates.

Last, but not least, is Raiders of the North Sea from Renegade Game Studios. The viking-themed worker placement game has been in development for a bit and should be out in Q1 of this year.

That's not all, either. They've signed a deal with WizKids giving them access to the entire WizKids' catalog, so who knows what we can expect in the future (Fury of Dracula (Third/Fourth Edition) please? Pretty, pretty please?). They've also stated that this is just the tip of the iceberg and they'll have more big announcements as time goes on.

If you're not familiar with Dire Wolf and are worried that they may have bitten off more than they can chew, take a look at their two existing digital ports, Lanterns: The Harvest Festival and Lotus. Both are exceptionally polished and gorgeous with online play and AI and everything else you'd want from a digital board game port. They're also the digital brains behind the Game: Clank! companion apps.

In other words, we're going to be getting some super-high quality apps of really high quality games on our phones, tablets, and laptops in 2019 and beyond.

We'll ping Dire Wolf and see if we can get any other details. 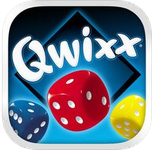 Qwixx for iOS gets a major update
Big news from Dire Wolf, but it's not the only news today. Outline Development has announced a major update to the iOS version of Qwixx. What's new? Here you go:

Outline Development wrote:
• Added a new Challenge against a CPU (AI) opponent
• Resuming a running game is possible now
• Locks can be closed with a tap in digital pad now
• Removing (Undo) crosses is now available in digital pad
• Ready-Button has a new wait state to avoid skipping by mistake
• Optimized instructions
• Optimized buttons for music and effect
• Entering (later changing) the players name is optional now
• Selection (later changing) of the game variant is optional now
• Small optimizations and bugfixing
If you're a fan of Qwixx or just a fan of quick, fun dice games, head over to the link below and pick it up for iOS Universal.

Board Game Randomizer available now for Android and iOS
Ever want the tedium of choosing expansions and setups to be taken off your hands? Now you can with a new companion app from Gabe Covert simply called, Randomizer.

The app lets you randomize expansions, starting situations, etc. and it does it for a slew of games.

CovertDad wrote:
Take the pain out of fighting over which expansions to use, which character each player plays, and what cards to include!