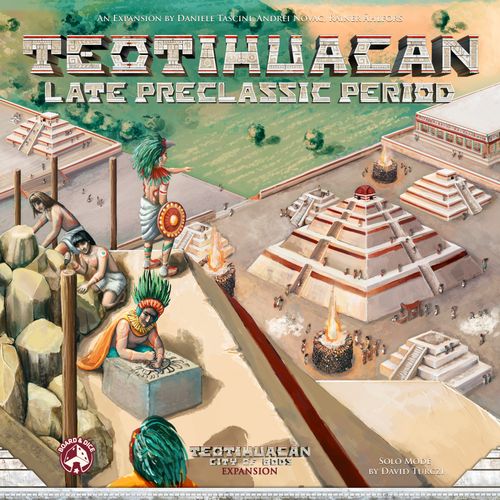 • I covered three game conventions for BGG in February 2019, and despite doing that — or perhaps because I did that — I've missed lots of game announcements along the way, specifically for expansions to existing games such as Teotihuacan: Late Preclassic Period, which adds modules to the Teotihuacan: City of Gods base game — asymmetric player powers, a fourth temple, new engineering techniques, variable effects that impact each season and eclipse — that can be used individually or in combination.

Publisher Board&Dice expects to debut that expansion at Gen Con 2019 in August.

• Next in alphabetical order we have Terra Mystica for which James Wolfpacker is developing an expansion currently titled Merchants. Here's his overview of the expansion: "It will have Merchants (ships for most factions) generated by a new building called the Shipyard (for most factions). Factions will send their Merchants to opponent's buildings to gain VP and resources. Factions receiving Merchants will be able to charge power as if an opponent built next to the building. This adds a new tactical movement element to the already deep strategy of Terra Mystica while maintaining perfect information.

"All 20 factions will receive a board extension to upgrade a Trading Post into the Shipyard with additional Special Actions to move and build ships. There will be new additional favors, round tiles, bonus tiles, town tiles, and power actions. This expansion MIGHT also come with physical versions of the online maps Loon Lakes and Fjords. This expansion is expected to be available at Essen in 2019." He's running tests of this expansion on Tabletop Simulator, and he explains how to get involved with the testing in this BGG thread. 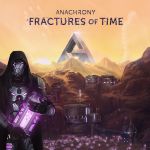 • Following closely behind that title in the database is Terraforming Mars: Turmoil, the fifth expansion for Terraforming Mars and one that brings new corporations, new projects, and a new type of cards (Global Events) to the base game. Publishers FryxGames and Stronghold Games plan to debut Turmoil at SPIEL '19 in October.

• Continuing through the Ts, we have Rise of the Combiners, the latest booster pack series for the Transformers Trading Card Game from Wizards of the Coast. Combiners are character cards that combine together to form a giant robot. That giant robot does not then harvest crops from a field, which seems like a missed opportunity, but that's probably not a useful skill in battle.

• Breaking with alphabetical order, we'll end with a tough one to tackle. The description of Anachrony: Fractures of Time from Mindclash Games probably makes sense if you've played the original game. I have not, so I won't attempt to summarize the following:

Quote:
Since the Paths' Time Rifts powered up for the first time on the Day of Reminiscence, masses of people across New Earth have been seeing visions of a fifth Time Rift hovering over the eerie Ground Zero of the impact, waiting to be discovered. These visions also invoked an increasing sense of empathy and fellowship between these people — a bond much stronger than their Path affiliation. A mass exodus from the Path capitals took place over the course of the first Era, and the first pioneers discovered that the Time Rift in their visions not only exists, but it holds the foundations of a new civilization, one that may eventually set all people of New Earth down a new path — the Path of Unity.

Explorers from the Path of Unity soon discovered a secluded mountain valley where the enigmatic flora not only survived the impact, but it mutated and evolved by the asteroid's toxic Neutronium dust. The resulting flower-like crystal formations synthesize a substance called Flux, which is collected and studied by the Harvesters, the valley'Anachronys mysterious inhabitants. The Harvesters are willing to share the secrets of the Flux technology with the Paths, but remain silent about its side effects, which only they are immune to...

In the alternate storyline of Fractures of Time, Anachrony's first major expansion, the four original Paths and the newly formed, sanguine Path of Unity have gained access to a powerful new technology called Flux. Flux Cores can be acquired in the Amethynia Valley, the expansion’s new main zone. By using the Flux Cores to power up their Fracture device, players may move (“Blink”) one of their already placed Exosuits to a new action space instead of placing a new one, or immediately retrieve some of their Workers or Free Action markers. This can result in never-before-seen action efficiency, but just like the Time Rifts, the Flux technology is a double-edged sword. Without a sufficiently advanced Fracture device, overusing it can cause Temporal Glitches; hectic negative effects such as shutting down the Exosuit bay slots, temporarily disabling buildings, or making players more prone to Anomalies.

The Valley holds other secrets as well. The Harvesters' advanced technology allows players to remove the Temporal Glitches, upgrade their classic Path tech with new quirks, and even enlist the Harvesters themselves as a powerful new class of Workers, who are immune to the Flux's side effects.