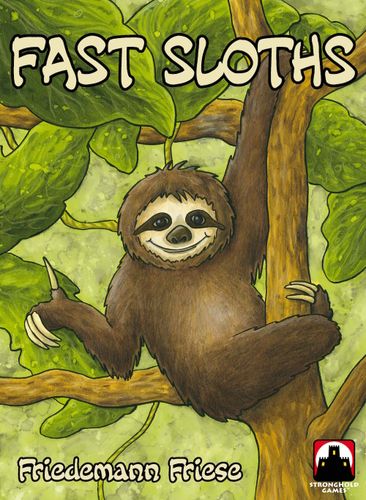 Are you planning for SPIEL '19 yet? Even if you aren't, game publishers are, with German publisher 2F-Spiele announcing its main title for that show: Fast Sloths, which will be titled Faultier in the German edition, "Faultiere" being German for "sloths".

Fast Sloths is, as you might expect, from designer Friedemann Friese, and this 2-5 player game will be released in English by Stronghold Games. Let's start with the publisher's description:

Quote:
You are sloths — cuddly, lazy, and, oh well, slothful.

All animals (including humans) like to take vacations, so everyone is together at a country resort. We sloths are sitting around, of course, while all the other animals are running throughout the resort. We want to look around, too, and traveling around the resort to pick up tasty leaves would be great — but running around ourselves is just too tedious. All the other animals are having fun, and we want that, too, but...we are so slothful.

And then we have an idea: We'll let ourselves be carried around by the other animals, thus getting around nicely. The others animals have so much energy that they'll even gladly carry us. They aren't slothful! Which of us sloths will be the first to get through the entire country and be victorious? We are ambitious, but so lazy!

Fast Sloths is a race game that at its core is a classic pick-up-and-deliver game — except that we ourselves are the cargo being delivered. We are being carried along the whole way and never take a single step on our own!

You always play with six out of twelve different animal species, and you can place the giant game board in four different combinations. On a turn, you draft 2-3 cards of different animal types from the top of their face-up decks, then you play as many animal cards as you like of a single type. Each animal provides a different type of movement or interaction with you, with ants carrying you along in a chain and the elephant throwing you with its trunk.

Fast Sloths is a game free from randomness that evolves only through the interaction between the players, doing so without any "take that" mechanisms — except for you snatching an animal from under the other players' noses because you need to use it yourself...
As mentioned above, you use only six animal species in each game, so by swapping animals in and out, you vary the possible actions available to players. The Power Grid-sized game board comes in two pieces, so you can arrange the segments in four different ways, varying the types of landscapes on the map. 2F-Spiele says that it's already working on new game board configurations and additional animals, and given the long life of Power Grid, I have no doubt that Friese could take this game in all sorts of directions. It all depends on the game's sales, of course, so for now I'll just note this future possibility and move on. 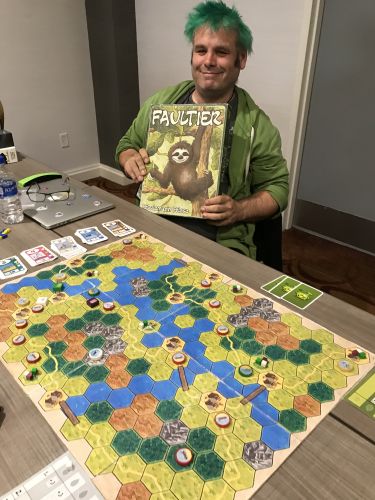 Designer Friedemann Friese with a mock-up of Faultier

I've played Fast Sloths once with the suggested starting set-up, both for the game board and for the six animals in play. For your introductory game, you place the animal tokens on specific spots on the game board, but after this first learning game, the rules suggest that during set-up players take turns placing animal tokens on the board one at a time. Players then choose starting locations for their sloth.

On a turn, you draft 2-3 animal cards from the face-up decks. Each animal card in a deck indicates the types of landscape on which the animal can move as well as its special ability, and the cards are stacked in order from lowest movement value to highest, which means that when you draft, say, a unicorn card, you might be exposing a better unicorn card. Cards played or discarded are placed under the decks in a specific order, so in theory you could track all of that information to know which cards are where in each deck and in each players' hand. I will not be doing that, but the possibility is there should you desire to do so.

After drafting, you play one or more cards of the same animal, trying to move your sloth from its current location to one of the many leafy lunches awaiting you. The numbers on a card show how many spaces an animal can move, and if you play multiple cards, you can sum the numbers. If an animal is next to you, it picks you up, then you can ride it up to its maximum movement value, then it can drop you in an adjacent space.

Some animals are straightforward to use, and some less so. A donkey just picks you up and moves you on roads (but not on bridges) and through three types of landscape, while the alligator moves only in water and on certain spaces adjacent to water. The unicorn has fabulous movement values compared to the other animals, but (1) you can play only one unicorn card on a turn and (2) only one unicorn token exists, so you can't rely on constant unicorn travel since someone else might take it in a different direction and leave those cards useless in your hand. To use the eagle, of which only one token exists, you need to play at least six movement points at once, after which that lone eagle will swoop down from wherever it is on the game board, pick you up, then move you up to six spaces.

Ants allow for movement in a chain, and moving from an empty space, then across the backs of one or more ants, then onto the ground again counts as only one movement point. Ideally you can move individual ants to create a chain or a series of space-ant-space-ant-space-ant-space in order to cover lots of ground quickly. (Of course if you do so, someone else can use that chain later, so you want to dismantle the chain behind you, if possible. In most cases you pull the rug up behind you, so to speak, but with the ants you need to do a little more work.) 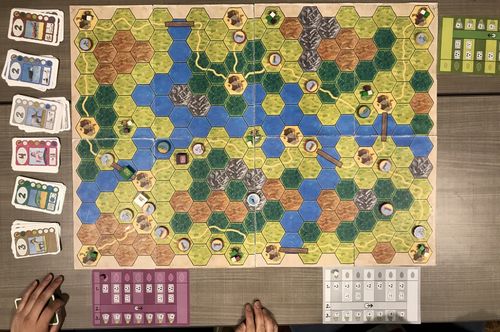 Sloth standings after the first turn

Fast Sloths falls into an interesting category of games in that it's pitched as a family game, with cute artwork, friendly animals, and a 45-minute playing time, yet the game is luck free and could be a "deep thought" strategy game depending on the willingness of players to track cards drawn and played and anticipate who might be doing what where. You might think of it as the game adapting to the players. If you want to focus solely on your own cards and do stuff from turn to turn, that's possible; if you want to plan multiple turns ahead, you can do so since you draft multiple animal cards each turn, but can play only one type of animal; and if you want to create an overall strategy for how you'll visit eight of the nine leaf locations before anyone else, you can do that, too.

As you collect more leaves, you draw fewer cards each turn, or must discard a card after drawing. In addition, your hand size starts shrinking, so you become pinched for options, which requires greater focus in the endgame when you're trying to collect one of those final leaves. Everyone knows where you need to go, and they might know what's possible for you as well, so you'll need to be a smart sloth in order to stay one step ahead of everyone else — a step taken by someone else, of course, since you'll never step anywhere on your own!