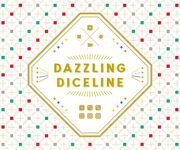 Let's sample another batch of games that will debut at Tokyo Game Market in late May 2019, with all of these titles and a few more appearing on the Tokyo Game Market May 2019 Preview that I've put together. This list barely scratches the surface given that hundreds of new titles will be released at TGM — check out the vendor list here! — but I do what I can. I also appreciate the efforts of Saigo, Jon Power, James Nathan, and Rand Lemley to dig a few scoops out of the mountain and add more titles to the BGG database!

• We'll start with DAZZLING DICELINE from Masaki Suga and analog lunchbox, who have created waves before with Airship City and passtally. Here's a short description:

Quote:
In DAZZLING DICELINE, use your red, green, and grey dice to perform dice actions while creating horizontal, vertical, and diagonal lines with the bonus tiles you collect in order to score the most victory points. You need to anticipate what the other players will do and use your bonus tiles to perform bonus actions if you want to efficiently perform dice actions and score victory points. 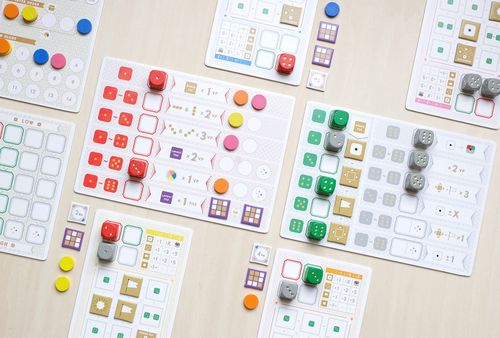 • Suga also has a second title coming from new publishing brand POLAR POND GAMES, with this being a 2-6 player game for younger players that plays in 10-15 minutes. An overview of insect inc.:

Quote:
In insect inc., a game that combines puzzles, cards, and picture searches, you are a researcher for a company of the same name that's developing colorful insects as art. A new kind of insect has fled to the forest thanks to a minor mistake by one of your colleagues, and because it is a new undiscovered species, it needs to be recovered quickly.

You must be careful when collecting insects for if you surprise them, they will mimic nature through camouflage. Can you safely recover the insects that fled? 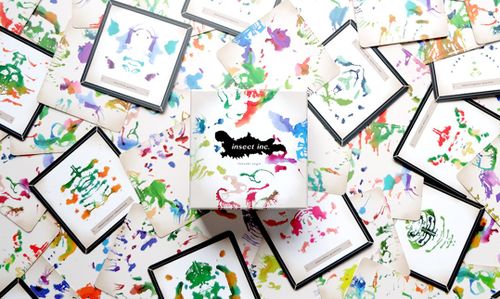 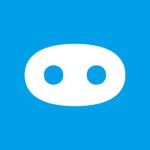 • Oink Games has a new tiny title from Jean-Claude Pellin — designer of Oink's 2015 release Nine Tiles — and Jens Merkl, a frequent design partner of Pellin's. Like Nine Tiles, Nine Tiles Panic is a real-time game in which players race to place tiles in a 3x3 grid; aside from that, the games are not similar:

At the start of a round, three scoring cards are revealed, such as most aliens on a single road, most dogs visible, or longest road. All player then race to assemble their town in whatever pattern seems best, trying to score points for one, two, or three of the scoring cards as they wish. As soon as the first player decides that they're done, they flip the sand timer and everyone else has 90 seconds to complete their town, then players determine who scores for which cards, with ties being broken in favor of whoever finished first. Players score points based on the number of players in the game, and players track their score on a chart over multiple rounds. 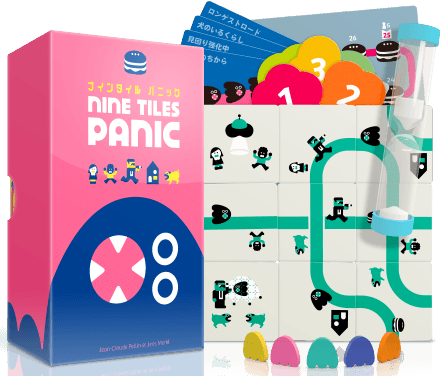 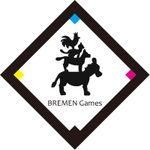 • We'll close for now with カラーギャングルズ (Color Gangsters), a trick-taking game — a popular genre among JP designers — from designers Takafumi Asano, Emi Hirano, and Yuya Hirano of BREMEN Games. This 3-5 player has a fair amount of Japanese text that is crucial to gameplay, so I can't even give you examples of the scoring conditions in the description below, but as is often the case with these games, I add something to the BGG database with the hope that others will add more information later:

Quote:
In カラーギャングルズ, players attempt to meet certain conditions while playing through their hand of cards.

To set up the game, shuffle the sixteen tiles, then lay out nine of them at random in a 3x3 grid. Each tile has a different condition on it that a player must meet in order to claim the tile. Players each receive a hand of nine cards from a fifty-card deck, with the deck having five suits of cards, each numbered 1-10. These cards show the color of the suit on their back, revealing that information to all players. 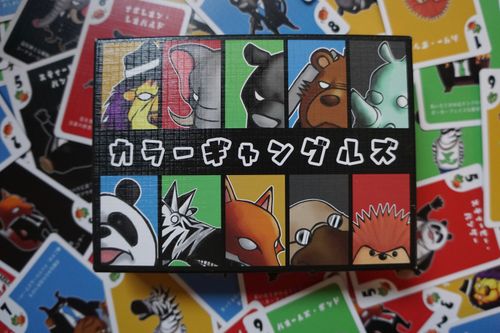