Reform the Earth, Then Raid Islands with John D. Clair and AEG 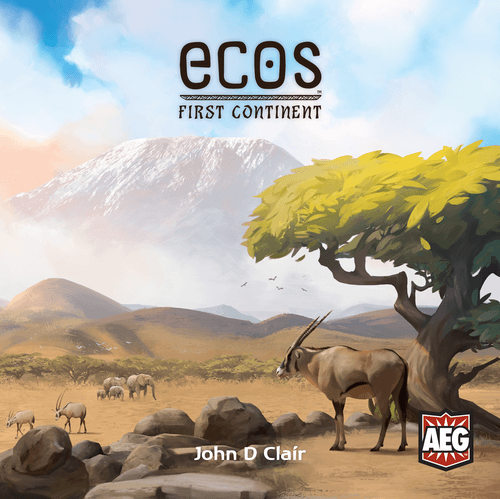 • Designer John D. Clair and publisher Alderac Entertainment Group have worked together on several designs, starting with Mystic Vale in 2016, then continuing with Custom Heroes in 2017, Space Base in 2018, and Edge of Darkness, which was funded on Kickstarter to the tune of $636k in March 2018 and which is currently scheduled to debut at Gen Con 2019 in August.

Turns out that this duo has several other titles in the works. Ecos: First Continent is a simultaneous play game — a genre also inhabited by AEG's recently released Tiny Towns — for 2-6 players that will debut at SPIEL '19 in October. Here's an overview of the setting and gameplay:

Quote:
What if the formation of Earth had gone differently?

In Ecos: First Contient, players are forces of nature molding the planet, but with competing visions of its grandeur. You have the chance to create a part of the world, similar but different to the one we know. Which landscapes, habitats, and species thrive will be up to you.

Gameplay in Ecos is simultaneous. Each round, one player reveals element tokens from the element bag, giving all players the opportunity to complete a card from their tableau and shape the continent to their own purpose. Elements that cannot be used can be converted into energy cubes or additional cards in hand or they can be added to your tableau to give you greater options as the game evolves.

Mountain ranges, jungle, rivers, seas, islands and savanna, each with their own fauna, all lie within the scope of the players' options. 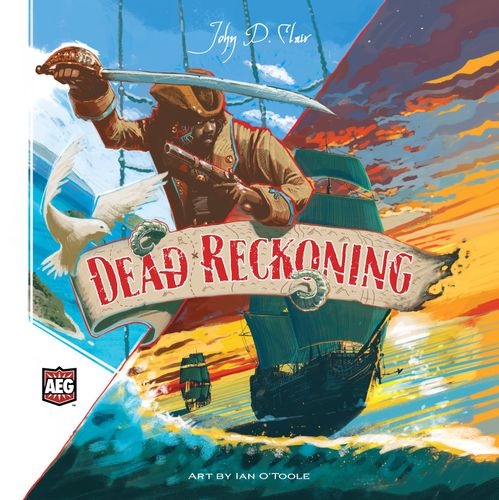 • Yet another design coming from Clair and AEG is Dead Reckoning, which features the "card-crafting" system seen in other Clair designs, along with a whole lot of other material. Dead Reckoning is for 2-4 players, bears a 90-120 minute playing time, and is due out at some point in 2019. An overview:

Quote:
Dead Reckoning is a game of exploration, piracy, and influence based in a Caribbean-eque setting. Each player commands a ship and crew and seeks to amass the greatest fortune. They do this through pirating, trading, treasure hunting, and (importantly) capturing and maintaining control over the uninhabited but resource-rich islands of the region. During the game, you can:

• Customize your ship: Your ship is represented by a token on the board. The board starts mostly unexplored and will be revealed as you venture into uncharted waters. You also have a ship board where you load cargo and treasure, and you can customize the guns, speed, or holding space of your ship.

• Card-craft your crew: You have a small deck of cards that will drive your actions in the game, with each card representing one of your crew members. This deck functions like one in a deck-building game, but the cards in the deck are sleeved, and rather than add new crew cards to your deck, you improve the skill and abilities of your crew cards by placing transparent "advancement" cards in those sleeves. Aside from the transparent advancements, your crew will also "level up" naturally during the game using a new card-leveling mechanism not seen in other card-crafting games such as Mystic Vale.

• Control the region: The region is filled with many deserted islands. These islands are a major source of treasure, and players will battle for control of these islands.

• Battle via a dynamic cube-tower: You can battle other players' ships or NPC merchant ships, and these battles are resolved via a new take on what a cube tower can be, with crew cards and ship powers increasing your chances of victory.

• Uncover secrets of the sea: Expansions for Dead Reckoning use a "saga" system in which certain content remains hidden and is discovered and added to the game organically only via playing. Rather than add everything at once, you gradually add it by playing and discovering. Depending on luck and player choice, less or more new content may get added each game.

• Aside from those two standalone games, in August 2019 AEG will release Clair's Space Base: Command Station, an expansion for Space Base that includes components for two additional players (allowing for up to seven players to be in the same game) as well as "pre-deployed" ship cards "to adjust for balance and gameplay with more than five players". Introduce a problem, then solve it in the same box — sounds like a plan!

Space Base: Command Station retails for US$40 and is packaged in a large box that can serve as storage for the Space Base base game, the Shy Pluto expansion, and additional future expansions.