From Koryŏ to NINE and from GOSU to...Something with Sorry We Are French 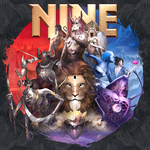 Now Beltrando is the head of publisher Sorry We Are French, and these games are coming back in new forms, with Koryŏ and Chosŏn being reborn as NINE. An overview:

Quote:
Byun Hyung Ja, the 9th Immortal, has revealed himself and his existence has been finally confirmed. The balance of power between the Immortals is questioned as Byun Hyung Ja plots and manipulates their influences. A new political and strategic struggle approaches. Each Immortal will have to use their influence to the best of their abilities to restore their power.

In NINE, you play influence and hero cards in each round of the game, then use their abilities to gain the most victory points during the endgame scoring following the end of the eighth round.
Yes, the ninth Immortal, with this game being set in the same world as Beltrando's 2018 card game Immortal 8 from SWAF, with David Sitbon providing the graphics for both that game and NINE.

Sample cards in NINE
That description is brief, but you can likely extrapolate from my 2013 overview of Koryŏ to get a sense of how to play NINE:

Quote:
The game lasts eight rounds, with the number of cards you're dealt and the number of cards you can keep respectively decreasing and increasing over the course of the game. In the first round, you have a hand of ten cards and can have at most three cards on the table at the end of the round; in the second round, you have nine cards in hand and can end the round with four cards; and so on. Each round, players simultaneously play as many cards as they want from their hand, but all cards must be the same character (i.e. number); they discard everything else from their hand, and those discards will be shuffled with the remainder of the deck for the next round.

Players then reveal cards in clockwise order from the round's starting player, and for each majority they have among all the character cards in front of them, they might receive a special power. If you have the most bankers (#6), for example, then you take a 1 VP token from the center of the table; having the most spies (#2) lets you steal a 1 VP token from someone else. After you've all revealed cards and used whatever powers are available to you, you discard cards from the table (if needed) to meet that round's card limit.

[Koryŏ is] a quick-playing game that combines majority-scoring and special powers in about as tight a manner as possible. You want to expand in every direction to get bonus powers and score majorities — nine points is huge! — and you want to protect what you already have to keep getting powers, but you're limited in what you can play each round with a fresh hand of cards form which to consider. 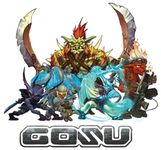 • As for GOSU, which was followed in 2011 by GOSU: Kamakor and in 2012 by GOSU 2: Tactics, that game is also being remade, with SWAF noting on Facebook that it will continue testing this new edition for a year ahead of a planned release at the end of 2020. Not sure what GOSU is about? Here's my short take from 2010:

Quote:
Build up goblin armies, then fight, fight, fight! Well, build up the armies anyway — sometimes fighting will be optional depending on what everyone else is doing. GOSU includes 100 goblin cards, with goblins coming in five clans/colors and three levels, with fifty cards at level 1 (two each of 25 cards), 35 cards at level 2 (all unique), and 15 cards at level 3 (again, all unique). Players start the game with seven random cards and two activation tokens. On a turn, a player can start building an army, with level 1 cards first, or use activation tokens to draw cards or use the powers on goblins in play. Once a player passes, they're finished for the round, and the round ends once everyone passes. The player who has the most powerful army at that point wins the round; winning three rounds wins you the game.

Players can duck out of rounds at any time, and they'll frequently want to do so as they draw cards only by spending activation tokens (and you have only two each round) or by using goblin powers (which also requires tokens). In addition, if you want to play level 1 cards for a clan not already in your army, you must first discard two cards to do so, making it expensive to recruit new forces — but you can't play level 2 and 3 goblins without a level 1 goblin of the same clan in play. As in life, goblin management is the key to long-term success. 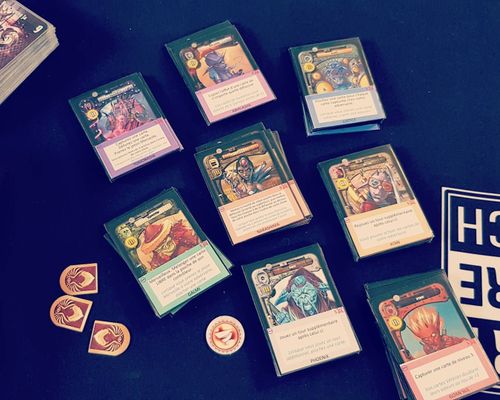 New version of GOSU being tested in May 2019