Patron Badge for 2011 through 2022
With all the introductory stuff for this blog series handled in post 1, we are ready to dive into the State of Siege (SoS) mechanisms. We’ll do this both to understand the core mechanical concepts and to see how they evolved and explored the nooks and crannies of the design space.


Preliminary table of contents for the series

The SoS games march to the rhythm of the event deck so that’s where we’ll start. You draw one card per turn, which defines what happens around you and how many actions you can take this turn.

The event cards all have flavor text on them which helps set the scene. Unlike most other games with flavor text I’ve played, it’s not just fluff text to world-build a fictive world. Instead it’s text about the actual historical events of the war(s) being simulated. I have really liked learning about history this way, though in some cases I had a hard time to couple the flavor text to what the event card does. This was particularly noticeable in Mound Builders since very little is known about the events and civilization being simulated (the native American Mound Builder culture) in the game.

I read the flavor text for the first couple of plays of each game and then stop, which speeds up the game, unless I play through the game with the cards in chronological order in which case, I reread the text. This can really add to the experience and it teaches the history better, but it of course has the downside that the game becomes more predictable.

In the first States of Siege game, Israeli Independence, the event deck was simply one deck consisting of all cards shuffled randomly together. I’ll can call this the Israeli-structure.

With the Israeli-structure events happen in completely random order. This results in a game with high variability in how it plays out and quick setup, but the price paid for this is that the game becomes swingy and the designer has little control of the story told by the game.

The second game Soviet Dawn, made by the same designer, Darin A. Leviloff, imposed a simple structure on the event deck. He divided the event cards into three acts each with their own deck. You start out with a random shuffle of the cards from the first act and when a specific event occurs you shuffle in the act 2 cards and the same goes for act 3. I’ll call this the structure the Soviet-structure.

The Soviet 3-act structure gives the designer more control of the game, its balance, and the story told, but the order of the cards can still vary a lot, because acts 2 and 3 can be shuffled in very early or very late, which can make the game swingy.

The mixing together of the cards from the three acts means that setup/teardown takes longer than in the Israeli structure, because you must sort the cards back into the three decks and shuffle three decks instead of one. 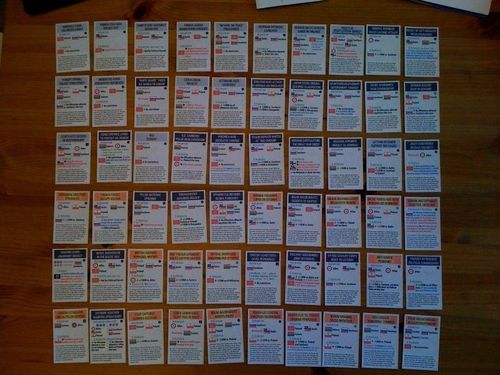 The full set of event cards in Soviet Dawn in chronological order. The three decks are color coded and it can be seen that they don’t conform completely to the historical order, implying that the designer took some historic liberties to make the game work as a game. Image credit: David Kennedy

The third game in the series, Zulus of the Ramparts, was the first not designed by Darin A. Leviloff. Instead it was made by wargame designer Joseph Miranda and he used a mix of the Israeli- and Soviet-structures.

As in the Soviet-structure, this game has a special card that triggers a new act and it also has 3 acts, but they’re structured differently.

One major difference is that the act changes come at fixed points instead of at random points as an in Soviet-structure and the third act follows the pattern of having the cards be specific to the act, but it also has a few major differences:

All of these are firsts for the series. They combine to create a quick third act where card counting won’t let you know what’ll come and the act 3 card flips are tenser which adds to the climatic feel of the story arc’s end.

It’s worth noting that 3) is surprisingly rare in the series with most games using the full set of cards every time. This might be caused by most of the games being from at time where the print on demand system meant that the component count was constrained, or it could be that the publisher, Victory Point Games (VPG), does it this way to reduce swinginess.

While act 3 has a set of specific cards the first two don’t. They use a common pool of cards like in the Israeli-structure. The fixed change in acts is thus not a change in card composition. Instead it’s a mechanical change, because new mechanisms come into effect to simulate as change from day to night.

The night-day mechanism is nice both thematically and for gameplay variation. The designer’s control is still very limited, though, because all but two cards in acts 1 and 2 are shuffled together randomly, and the setup time is slightly increased.

The changes introduced by the Zulus-structure adds a nice story arc to the game, some control of the game flow for the designer, and ‘we survived because an army of allies arrived just in the nick of time’ makes for a more thematic closure than ‘yay we won this war where we were completely surrounded because the event deck ran out’

Legions of Darkness by Chris Taylor took the night-day mechanism a few steps further. In this game there are separate decks for day and night as well as special rules for night. The most import night rule is that a special “Terror army” appears when night falls and disappears when dawn breaks. These effects combine to create an ebb and flow of the tension and the storytelling therefore feels more like that of a novel, while the Zulus-structure could be said to correspond more to the story arc of a short story.

In the sixth game in the series, The Lost Cause, designer Hans von Stockhausen, took the Soviet-structure a step further by having 4 acts represented by 4 decks that are played through one after another with no shuffling them together. I.e. you play through all of the act 1 cards before going on to act 2 (and so on). This gives the designer more control of the flow of the game which leads to better balance and tighter storytelling at the cost of less variety in the gameplay.

The above is only true for the basic version of The Lost Cause, though, since the advanced version that’s included in the box (well, zip-loc bag) shakes things up. In this game the cards are most likely to be a part of the act they belong to, but a few randomly selected cards are moved to other acts, and there are specific cards that after being resolved in one act gets added to the event deck of the next act. This feature seems interesting and unique in the series, but I haven’t tried it out.

Given that the Lost Cause was the first game to have acts fixed decks and fixed points of act changes, it would be fair to have called this structure the Lost Cause structure, but because of the changed structure in the advanced game, it becomes ambiguous to us that name.

Instead I’ll refer to it as the Levée-structure after the first game that went all in with this structure: Levée en Masse. This game has a 3-deck structure, where you play through the full deck of each act before going on to the deck of the next act and the first and last card of each act are always the same. 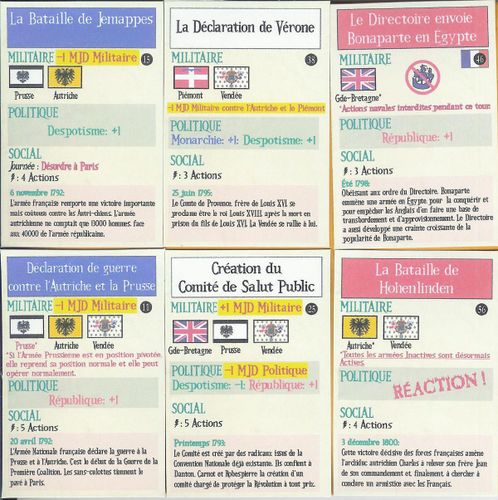 The Levée-structure gives the designer the tightest control of the game so far in the series, meaning that he has much better control of the balance and the storytelling. It also means that it’s easier to have a long-term strategy and make informed decisions. As with all other good things, there’s a price tag. In this case that tag reads: “Loss of variation”. Thus, Soviet- vs. the Levée-structure is a trade-off: balance + control vs. variation.

Which approach you’ll like is a matter of taste. I prefer the Levée-structure to the Soviet structure, with the Israeli structure being a distant third in most cases, but the latter’s simplicity makes it work fine for simple and super quick game like Israeli Independence from which it got the name

Luckily for me, other games in the series use the Levée-structure to great effect: Malta Besieged, We Must Tell the Emperor, and Cruel Necessity.

Dawn of the Zeds: Taking the Levée structure and running with it

The third edition of Dawn of the Zeds takes the Levée structure and runs with it. It has a 4-act structure each with a specific mix of cards from that act and nasty special event cards. The downside of this is that setting up the event deck takes time. That might sound like a big deal, but it isn’t that bad given the fairly long playing-time of the game and the more controlled difficulty level and narrative structure the deck provides. Both of which I think are crucial in this game. 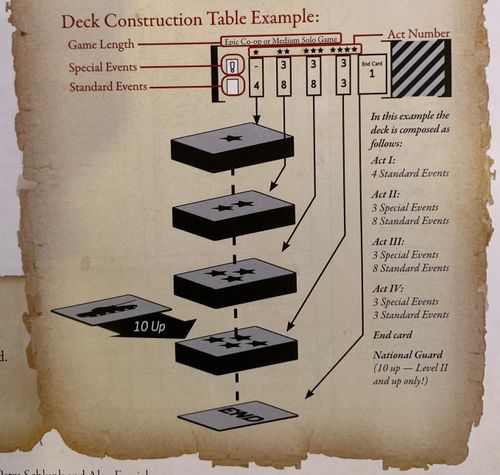 Zed-up example for the Dawn of the Zeds event deck. Image credit: A blogger who writes way too long blog posts

Wild difficulty swings like those in Soviet Dawn are OK in short games, but for a 1½-2-hour game like Zeds it would be a big minus and since narrative makes that game shine, the controlled deck structure is important and worth the extra setup time.

There are a lot of other tweaks to the structure in the various games, such as the 4 or 6 card draws per turn in Empires in America, but describing all of them would take too long and the ones I’ve covered here are the most common.

Next up: Designer control, storytelling, and pivotal events

This post might have been a bit dry, but I think it’s important in understanding the evolution of the series and you can learn quite a bit about a game just be checking how its event deck is structured.

This post has also laid the foundation for the next one, where things in my opinion gets much more interesting. So, stay tuned for the next post: “Designer control, storytelling, and pivotal events”.