Ticket to Ride Being Developed into a Television Series 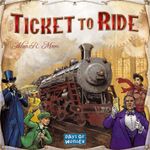 In an April 2019 post, I gave a short description of Asmodee Entertainment in relation to the founding of a fiction imprint within it: "Asmodee Entertainment is a newly formed platform of games publisher and distributor Asmodee. Its mission is to extend Asmodee's leading intellectual properties into TV/film, book and comics publishing, location based-entertainment, and consumer products, working in parallel with sister platforms Asmodee Boardgames and Asmodee Digital."

With that groundwork in place, here's a press release touting what seems to be the first television deal announced for an Asmodee property — Ticket to Ride:

Quote:
Propagate, one of the world's fastest-growing independent content creation and distribution studios, today announced the development of an adventure competition series with Asmodee Entertainment, a newly formed platform of leading global games publisher and distributor Asmodee, whose titles include Catan, Pandemic, Arkham Horror, KeyForge and Ticket to Ride.

Propagate and Asmodee Entertainment will develop a television series based on Alan R. Moon's best-selling adventure board game, Ticket To Ride. The iconic board game, published by Days of Wonder and Asmodee Studios, has been played over 65 million times online and sold over six million copies in more than 40 countries around the world. The television adaptation will be a winner-take-all travel competition series in which five teams take the journey of a lifetime as they seek to complete epic challenges and rack up the most miles by air, land and sea.

"Propagate has earned a reputation for identifying great stories wherever they are and turning them into unique and compelling filmed entertainment," said Propagate Co-CEO Howard Owens and President Greg Lipstone. "This project and partnership are perfect examples of that and we are thrilled to be in business with the like-minded people at Asmodee."

"Asmodee Entertainment will develop new and exciting entertainment experiences based on the vibrant universes of our popular games. We are delighted to bring one of our most iconic properties to life with the help of our visionary partners at Propagate. We look forward to future collaborations," said Asmodee's President Stéphane Carville.

In case you're not familiar with Propagate, here's the company biography from the press release:

Quote:
Propagate founders Ben Silverman and Howard Owens met at William Morris in the late 1990s. Silverman had pioneered the global format business by packaging and bringing to America a stream of hits including "Who Wants to Be a Millionaire?," "Big Brother" and "Queer as Folk." Silverman and Owens founded Reveille in 2002 with the mission of building an independent American alternative studio based on the concept of creating and producing culture-defining television. With hits like "The Office," "The Tudors," "Ugly Betty," "MasterChef" and many others, Reveille became the gold standard of American independent television studios. Silverman and Owens founded Propagate in 2015 as an independent content studio inspired to create and influence culture.

With offices in Los Angeles, New York and Paris, and others soon to be announced, Propagate is one of the world’s fastest-growing independent premium content creation companies. Its emerging portfolio includes "November 13: Attack on Paris" and "Haunted" for Netflix, "Lore" for Amazon, "Charmed" for the CW, "In Search Of" for the History Channel and "Planet of the Apps" for Apple, with more on the way. Propagate’s expanding portfolio of companies includes Electus ("Running Wild With Bear Grylls," "Jane the Virgin," "Fashion Star"), Big Breakfast ("Adam Ruins Everything"), Notional ("Chopped" food series franchise), Hard Twenty, Incognito and talent management firms Artists First and Authentic Talent & Literary Management.