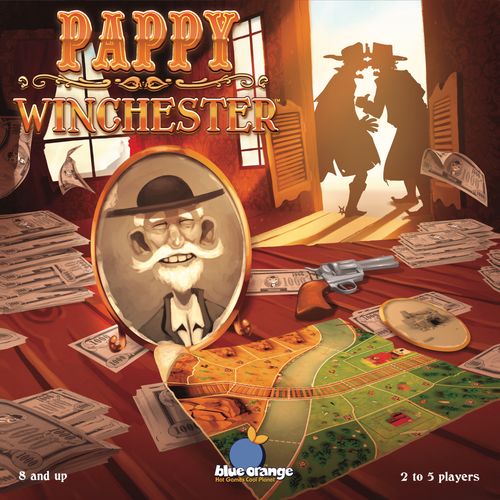 • Every year ahead of Gen Con and SPIEL — the two conventions with the most new game releases — I discover that we've added lots of new titles to the BGG database in the early months of the year that I thought would have been fleshed out by the time the convention opens, but they haven't been. When possible, I poke publishers to see whether they can provide more game details or pass along the rules so that I can do the fleshing.

With that in mind, here are detailed descriptions of two titles from Blue Orange Games that will debut at Gen Con 2019, with one of them being the 2-5 player game Pappy Winchester from Jérémy Pinget. Turns out that Pappy Winchester is an auction game through and through, with 19 nineteen plots of land being auctioned over the course of the game and with the winning bids being distributed among the other players a là Traumfabrik. Here's a detail description of the game:

Quote:
Pappy Winchester has kicked the bucket! Poor thing, he was the king of swindlers and everyone knows he was filthy rich! His final wish was that his descendants would share his fortune and the plots of his ranch, with the richest becoming the new head of the family. After all, for him the most important thing was that his money stayed in the family! Pappy thought of everything and left an outline of his belongings. In Pappy Winchester, you and the other heirs are now assembled around this map to divvy up Pappy's possessions...

The game board features 19 plots of land, divided into seven desert plots, six prairie plots, and six forest plots, with train tracks and a river running crossways through the land, and a saloon set apart from everything else. To set up play, give each player $8,000 and two secret objective cards, then place a bonus token face down on each plot of land.

On a turn, the active player draws a plot token at random, then players hold an auction for that plot, with the winner marking it with one of their tokens, then revealing the bonus token and carrying out its effects. This token might let you look at the face-down mine or ranch cards to determine the value of those plots; move the train or boat along the tracks or river, with players owning properties adjacent to this vehicle's location earning money; or collect funds from the saloon. The winner of the auction then divides their bid as equally as possible among all other players, with any remainder being placed on the saloon.

Each player starts the game with a duel token, and when a player is involved in an auction that's down to them and someone else, they can decide to sped that token. If they do, a third player shuffles two duel cards — one showing a gun being fired, and the other not — then each bidder takes one of them, with the player holding the firing gun winning the auction.

Five piles of banknotes are laid out at the start of play, with a different shared objective card placed on each pile. If the completion of an auction allows a player to meet one or more of the objectives, such as owning one of each type of land or having three plots that don't touch the river, then that player claims the banknotes under that card. After the 19th auction, players reveal their secret objectives, earning money for how well they've met those goals, and whoever owns the most plots of land receives $5,000. Whoever now holds the most money wins! 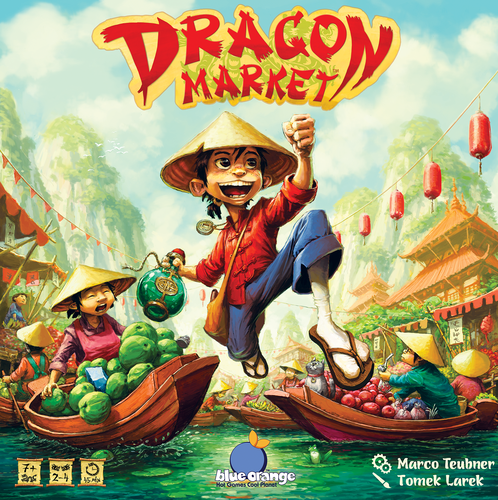 • The other title coming from Blue Orange Games is Marco Teubner's Dragon Market, which is for 2-4 players. We recorded an overview of the game at Spielwarenmesse 2019, but now we actually have a full game description in place:

Quote:
In Dragon Market, players attempt to manipulate boats on a river in order to pick up the items they need to complete objective cards.

In more detail, each player starts the game with their figure on a pontoon in the corner of the board, and they take turns placing boats on the board, with each boat taking up three spaces; some boats have a sailor in the center space, while others have a sailor in the end seat. Each of the two empty spaces of each boat are then filled with two identical merchandise tokens, with the game including twenty types of merchandise. Each player starts the game with an objective card showing four different types of merchandise.

On a turn, the active player rolls the dice to determine how many actions they can take; they can spend 1-2 coins to add to this number of actions. Actions are:

If you don't spend all of your actions, take coins equal to the number of unspent actions to bank them for later. As soon as you have all of the merchandise needed for your objective card, return to your pontoon. Once you do, you draw a second objective card, and whoever completes two objective cards first wins.

The game also includes team rules for both the regular and the advanced objective cards.
Okay, that's two more games detailed for our Gen Con 2019 Preview, which recently topped five hundred listings. Far too many to go...