Fight in Worlds Above in Yggdrasil Chronicles, Then Revisit Underwater Cities 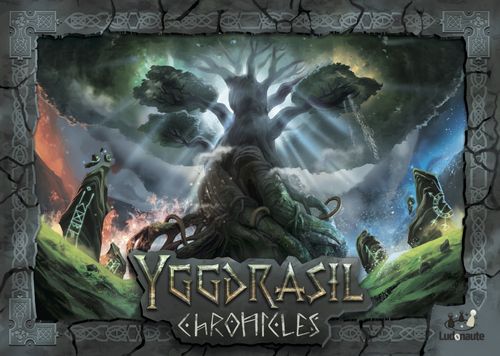 • In 2018, French publisher Ludonaute released a final printing of Yggdrasil from designers Cédric Lefebvre and Fabrice Rabellino, noting at the time that a "revamped version of the design" was in the works for 2019.

That revamped version is Yggdrasil Chronicles, a game solely by Lefebvre for 1-5 players that keeps the co-operative nature of the earlier game, while adding a campaign mode with a fifty-page saga book. Here's an overview of the setting and gameplay:

Quote:
In Yggdrasil Chronicles, each player takes the role of a Norse god and attempts to keep evil forces from devastating the nine worlds, destroying the world tree Yggdrasil, and surviving the onset of Ragnarök.

To set up, each player takes one of the seven Norse gods, 5-9 life points (depending on the player count), and a set of cards showing the six enemies who are attacking the nine worlds; you shuffle these enemy cards and place them next to you. These nine worlds are represented on a three-level, 3D game board, with the board having locations for artifact cards, creature cards, hero pawns, elf pawns, anonymous pawns, and more. Each level of the board depicts three worlds on it, and the middle board rotates.

At the start of a round, each player places the top card of their enemy deck on the "Wheel of Enemies". Players can take turns in any order. On a player's turn, they first reveal their enemy card. If this is the first appearance of this enemy this round, the player continues their turn; if not, then the enemy is activated, typically moving to a different world, then taking some action. If the enemy can't move, e.g., Surt is supposed to move up a level, but is already on the top level, you lose the game. If the enemy can't take its action, e.g., Loki needs to place an Iotunn pawn, but none remain in Iotunheim, you lose the game.

While normally you hope to avoid duplicating an enemy, you want to double up on Nidhögg as that enemy starts on the leftmost space in your saga book, and if Nidhögg moves all the way to the tree icon, you win the game. (Nidhögg might also trigger effects when moving to a new location.)

If an enemy moves to where another enemy is located, that world is devastated and no action is possible there except for healing the world tree.

Whether or not an enemy is activated, you can then move — either to a different world on the same level or a different level above or below your current location — then act, either performing the action of the world in which you're now located or fighting. Powerful god that you are, you always win a fight, but you suffer "risks" equal to the strength of the enemy. You can sacrifice heroes in Valhalla to remove risks or make saving throws on dice, possibly with an elf assist, but each risk you don't prevent costs you 1 life point — and if any god runs out of life points, you lose the game.

As for performing world actions, you can collect elves, heroes, artifact cards; remove Hel's anonymous minions or Surt's fire giants; or receive help from worldly creatures. If another god stands in this world, your action is improved; if an enemy stands in that world, then your action is penalized.

In addition to that base game, you can play Yggdrasil Chronicles on the hard mode, which increases the challenge of gameplay while giving each god unique powers. The game also includes a six-saga "Ragnarök campaign" that begins with Baldr's murder, then carries on from there.

• Rio Grande Games has a second printing of Vladimír Suchý's Underwater Cities heading to market, with this version now including the Biodome promo that was originally released separately (and that's still available via the BGG Store). This edition also features an extra sheet of single resource chips, cardboard player boards instead of a paper ones, and a reinforced box bottom to keep all this stuff in place.

Ken Hill, production manager at Rio Grande, notes that while an upgrade pack is available via some European retailers to make the original English-language release from Delicious Games match the production of the first printing of the game from RGG, no upgrade pack is available for earlier editions to match the new edition coming from Rio Grande. "There was no real practical way to make this happen", says Hill. That said, "Current plans from Delicious Games include even better player boards to be made available in the expansion which will be out at SPIEL '19." Rio Grande Games will distribute that expansion in English for those not making the trip to Essen.