Apologies for the silence over the past few days. Being a good grandson-in-law sometimes takes more time than you realize...

• French site Jedisjeux gives a rundown of the first issue of Ystari's new company-specific magazine, which debuted at the Cannes game festival in late February 2011 and will be available at some point on the Ystari Games website. The hightlights:

— Emanuele Ornella, whose Assyria was released by Ystari in 2009, will have a new game coming in 2011, a card game set in the world of the Wizard of Oz that can be learned in five minutes and played in ten.

— Ystari will release a new edition of the 1985 Spiel des Jahres winner, Sherlock Holmes Consulting Detective, with the mysteries rewritten to match the style of Sir Arthur Conan Doyle. This game will likely appear in 2011, with both a regular and a deluxe edition.

— Alyens is another title coming from Ystari, that being the new title of Star Edge, a semi-cooperative design from Gildas Sagot, Yann Clouet and Vincent Arnoul that was one of four winners of the 2008 Boulogne-Billancourt game design competition.

• LEGO will take its board game line in a new direction with Heroica, which was on display at the 2011 Nürnberg Toy Fair. Here's a write-up from Hilko Drude, who attended Nürnberg and wrote about the experience in February 2011 for BGG News:
Quote:
Heroica is a board game series from LEGO, due out in August 2011. There are different sets which can all be combined into a larger game.

Heroica is a classic dungeon game. The players move through tunnels, collecting treasure and fighting enemies. Conflict is resolved by dice rolls. The die results can be a number or a symbol, for example allowing the player to use a special weapons. Instead of a character sheet, the players have little equipment "backpacks" which can be filled with weapons, potions, keys, etc., depending on what they find in their adventure.

The sets have different themes, like different landscapes. They can be combined so that the players complete a "level", then advance through doors into the next level. Draida Bay, the smallest set, is for two players. Nathuz Cave and Waldurk Forest are for two or three, and Castle Fortaan, the largest set, is for two to four players.
A couple of notes: Hilko submitted info on all these titles to the BGG database, but we're trying to figure out whether to list them separately or as versions of the same game. The August 2011 release date he cites is most likely for release in Europe, as all of the LEGO games have appeared on that continent first, only migrating to North America 6-12 months later. German site Spieltest recorded an explanation of the Heroica line at Nürnberg, a German-language explanation mind you, but it shows off the new bits.

• Designer John Clowdus has a few interesting releases from his Small Box Games, starting with a new edition of the unusual deck-building game Cartouche that includes larger cards. Bhazum: Ksari is set in the city of Bhazum from his earlier card game of the same name, but plays differently. Finally, Clowdus has Omen: A Reign of War, in which two players represent the sons of Zeus and naturally need to wreak havoc on puny mortals in order to determine which of them best takes after dad.

• Bob Carty, VP Sales & Marketing for Mayfair Games, has announced that the publisher's new version of Francis Tresham's 1830 "is delayed in production due to issues beyond the scope of our control. We expect with this setback that it will not ship till May." The 1830 game page on the Mayfair website lists a street date of May 19, 2011.

• Fantasy Flight Games has now posted information about Rune Age, a deck-building card game set in Terrinoth, the fantasy setting of FFG's Runebound. Here's an overview of the game from FFG:

Quote:
Rune Age is a unique deck-building game in which players choose a scenario that establishes the game’s victory conditions. With four included scenarios, Rune Age gives you many different obstacles to face while also setting establishing the players' allegiances. Some scenarios pit the players against one another while another unites them against a common foe, creating a fully cooperative deck-building experience. These different scenarios challenge players to develop new tactics every time they play.
• Designer Seth Jaffee has posted a draft version of the Eminent Domain rulebook and is looking for feedback ASAP before the rules head to print.

• Queen Games released a small expansion for Fresco at Spiel 2010, and now Fresco: The Scrolls will be released through retail channels, with the expansion arriving March 2011 and retailing for $25. 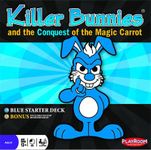 Quote:
Can you keep from being attacked by the exotic Xanadude, or the outraged Lordzilla? Players may defend their bunnies with Raisin Hell or use Dragon Of Doom to devour an opponent! Full of comical spoofs, humorous parodies and hysterical pop culture references, Killer Bunnies Conquest will have you managing your resources, bartering with your enemies, and plotting your strategy (not to mention your revenge) on every turn!

Killer Bunnies Conquest is a follow-up to (and completely compatible with) the popular Killer Bunnies Quest card game series. You'll be surprised by an entirely new array of wacky weapons, risky P-cards and wince-worthy Terrible Misfortunes! Morden's Metals Exchange is a new market where a player may buy and sell precious metals to earn Dolla. Kaballa's Market Two will sell you the Radish and Milk you'll need to feed your bunnies! Some things are different, but the goal is still the same; survive long enough to claim the Magic Carrot and win the game!