Pound for pound, the amoeba is the most vicious predator on Earth!
Patron Badge for 2008 through 2012
• BGG user Jesse Dean kicked up a lot of dirt with his March 22, 2012 blog post "A Few Acres of Snow and the Critical Silence On The Biggest Flawed Game of 2011", but much of the ensuing commentary focused on the brokenness of AFAoS, the definition of "brokenness", how broken a game must be before it's called "broken", how a broken game can still be fun for the casual gamer, and other riffs on brokenness with little attention paid to what I feel was Dean's main question: Are game critics failing their readers?

In early April 2012, Dean posted a follow-up article – "The Current Limitations of Critical Infrastructure in the Board Game Community" – explaining why he feels that game criticism is sparse in general (and not just in terms of outing AFAoS) with those factors being "the relative youth of modern board gaming, the size of the board game market, and the dominance of BoardGameGeek (BGG) in board game discussion".

What's missing from that list, however, is what I feel is the main reason that game criticism is sparse: Most people who review or write about games never intend to be critical; instead they want to participate in, and perhaps even lead, the conversation about a trendy game while that game is still cresting its attention wave. In other words, game criticism is sparse because few strive to be critics.

Perhaps this seems like a demented "water is wet" statement, but I think this detail is worth pointing out. Many reviewers – and I include myself in this bucket sometimes – want to say something about a game before most gamers have yet to play it. (I'd say "before most gamers have yet to form an opinion about a game", but in all too many cases the opinions come prior to playing instead of the other way around.) Thus, you have people posting game reviews after one or two plays so that they can be part of that early wave of coverage, even though their commentary tends to cover the mechanisms of game play while offering little else.

The practice of wanting to say something first is hardly restricted to board games, of course. Rich Juzwiak wrote an interesting piece on Gawker in March 2012 about the growing presence of television show recaps and why after five years of creating such recaps he'll never write them again. An excerpt:

Quote:
No more thankless work that posits the writer as an entertainer while the readers demand accordingly. (The emails come regularly: "Where is it?!") No more being bound to the whims of a show that could at any moment take a turn for the shitty, and will, if nothing else, thwart my social life. I want to be a normal person who's watching TV, not some frantic note-taking instant replayer. No more regularly scheduled forced digestion in a period of time that gives my brain and writing cramps.

It's fatigue, plain and simple, that comes from within but is informed from without. The limitless ubiquity of recaps makes writing them a challenge. Competition is stiff and deadlines are brutal, typically requiring just a few hours for turnaround to remain relevant. For this reason, formal and technical advances are few and far between: Typically, the biggest adventure a current recap can take is a shticky template tailored specifically to a show's format.... The most you can hope for is that the blocks of text are broken into smaller blocks. Given the several modes of expression that the Internet affords, the time-crunch limitations are especially frustrating: We cannot use what is at our fingertips — images, gifs, videos, and sound files — because we do not have the time.

The paradox of the medium is that with more recaps comes the demand not just to be faster, but also more distinct. The impossibility of this is frustrating enough to shut me down.
With so many games being published, some are looking for any reason to remove a game from their long shopping list while others want justification that they're right to be buying this game that they want. Both of these parties favor early commentary, no matter how uncritical, because such commentary serves their needs.

Of course not everyone desires such quick feedback, and as Rob Goodman argues in a fascinating essay on The Millions, the drive to be timely, to be at the crest of that wave dropping crumbs of opinion on everyone else, is a habit driven by the news cycle. That habit is then picked up by the public at large because, well, because we're human and it's easy to become inflamed or intrigued by whatever is current, by whatever resonates to the "now" of our being and our surroundings. Is that really what we want?, asks Goodman.

Quote:
Why do we read opinion, or essays, or nonfiction of any kind? Sometimes, we're in search of a discrete, practical piece of information. But the range of useful nonfiction is much smaller than the range of nonfiction that competes for our attention by pretending to be useful – by creating a veneer of urgency. We're encouraged to read a piece on Leonardo on the occasion of a new museum exhibit, even if tickets are sold out; a retrospective on U2's Achtung Baby on the album's 25th anniversary, but not its 24th or 26th; a piece taking apart the Berenstain Bears simply because the author is in the news for being dead. The timeliness of those pieces does nothing for us, except provide an illusion of usefulness.

Yet an interesting person can be interested in Leonardo or U2 or the politics of children's books at any time — and can read about things that are inherently interesting, not accidentally interesting for 15 minutes. When we reward timeliness with the limited currency of our attention, we put ourselves in a tightly circumscribed place in which our intake of information is left up to the whims of the news cycle.
As the news guy who sometimes(?) posts items of limited interest with a fixed duration, I can be as guilty of a short-term outlook as everyone else – but I think that I can also sometimes rise above the desire for a quick hit and create something that will still be interesting, informative, and yes, critical months or years after I set down those words. The challenge, as with all things in life, is prioritizing your efforts to produce material that you will later have been proud to produce because in all too little time you will produce no more.

Now, in case you're still interested, on to the rest of today's links...

• Given that it racked up a quarter-million views in a couple of days, you've perhaps already seen this video of actor Wil Wheaton and friends playing Small World on the debut episode of Tabletop, but if not, it's a nice introduction to the game for Joe Public with impressive production values. The banter is a bit too chummy sometimes, making you feel like an intruder, and Sean Plott cheated misplayed to great advantage on turn one with his Giants, but still a fine introductory effort to those not familiar with modern games.

• WizKids has announced a Quarriors! Quorld Championship Tournament (ahem) to be held at Gen Con 2012 in August, as well as the inclusion of Quarriors! in the WizKids Event System, which is set up to enable stores to host and organize local tournaments and assist players in finding these events. For the Quorld Championship Tournament, players can qualify through play at Gen Con or search for a qualifying event held at a store listed in the WizKids Event System.

• The Economist reports on a study in Psychological Science that investigated whether "the impulse to cheat is something that grows or diminishes when the potential cheater has time for reflection on his actions". Participants in the study would roll a die in secret, then report how many pips show on the die, receiving a payment based on the number they stated: more pips = more money. From The Economist:

Quote:
Half of the participants were told to complete this procedure within 20 seconds while the others were given no time limit.

The researchers had no way of knowing what numbers participants actually rolled, of course. But they knew, statistically, that the average roll, if people reported honestly, should have been 3.5. This gave them a baseline from which to calculate participants' honesty. Those forced to enter their results within 20 seconds, the researchers found, reported a mean roll of 4.6. Those who were not under any time pressure reported a mean roll of 3.9. Both groups lied, then. But those who had had more time for reflection lied less.
In a follow-up experiment, the deadline for announcing a number was dropped to eight seconds. From the article: "In this case the first half reported an average roll of 4.4. Those given no time limit reported an average of 3.4. The second lot, in other words, actually told the truth." The article concludes: 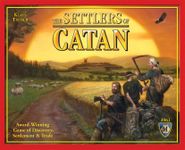 • U.S. publisher Mayfair Games notes a small problem with its Q4 2011 production run of The Settlers of Catan, with some copies of the game having a miscut #3 border connection that doesn't connect properly. If you're in this situation, contact Mayfair to request a replacement.

• In other Mayfair news, ICv2 notes that the publisher plans to work with retailers who carry much of the Mayfair line to create personalized television advertising for these stores for free, with the retailers then being responsible for getting the ads airtime.