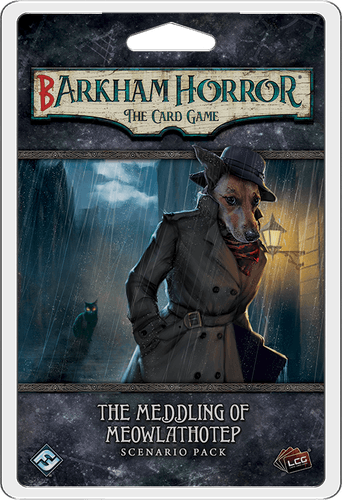 • I shun April Fools Day jokes, not talking about them in this space or on BGG's Twitter account, partly because I don't find them amusing, but mostly because I don't want someone to question whether or not something I post is a real thing. With the vast number of games being published, I hardly need to turn to fictional products in order to find something to write about.

That said, I can now point to one useful or meaningfully productive AFD joke, that being Fantasy Flight Games' announcement on April 1, 2019 of Barkham Horror: The Card Game – The Dogwich Legacy. Turns out that so many people responded positively to this gag that FFG has decided to release an actual dog-based scenario for Arkham Horror: The Card Game. Here's an overview of what's coming in the 2020 release Barkham Horror: The Card Game – The Meddling of Meowlathotep:
Quote:
Barkham Horror is an alternate universe in which the conflict between humanity and the eldritch forces of the Mythos takes a back seat, and the conflict between dogs and cats takes center stage. In The Meddling of Meowlathotep, a 78-card standalone scenario pack, the investigators must stop Meowlathotep, the Prowling Chaos, Meowsenger of the Outer Feline Gods, who is terrorizing the city of Barkham. Only a few precious pups can defeat the various Meowsks of Meowlathotep and prevent them from destroying Barkham and the world!

When this adventure kicks off, you are hot on the trail of a cat conspiracy. A catspiracy, if you will. Dogs all across town report seeing strange, unnatural cats prowling the streets of Barkham, and each day more and more pigeons are going missing. You've picked up the scent of something big, and once you sink your teeth into a story, you just can't let go. A little wet fur has never stopped you from finding the truth. Perhaps if you investigate the areas of Arkham most plagued by these sightings, you can root out the cat‐monsters that dwell within. 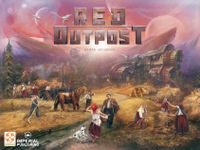 • Extraterrestrial communist settlements — that's where you find the action taking place in Red Outpost, a game from Raman Hryhoryk and Lifestyle Boardgames that is being released in English via Imperial Publishing, a new publisher imprint founded by Seth Hiatt of Mayday Games. Here's an overview of this 2-4 player game due out in Q2 2020 following fulfillment of its Kickstarter crowdfunding campaign (KS link):
Quote:
A top secret Soviet space mission set out to colonize a planet in a remote galaxy, far away from home. The settlers built there a small communist heaven which exists to this day. As one of the leaders, your goal is to guide the settlers on this new, yet strangely familiar terrain.

In Red Outpost, players get to control all of the settlers, each time a different one. You must expertly manage the resources and choose the jobs carefully so as not to upset the settlers: Keeping up morale is of utmost importance if you want to become the most prolific leader!
Yes, it's a worker placement game in which you can place any worker since they are under the collectivist control of all players. Notes Hiatt, "This is our first game, but we have two more planned for early next year [2020] (both original titles, not licenses)."

• At SPIEL '19, Belgian publisher Game Brewer showed off a prototype of Paris, a game due out in 2020 from the famed design team of Wolfgang Kramer and Michael Kiesling. Here's the short take on the game for now:
Quote:
Explore Paris in the 19th century. Discover its renowned architecture, and obtain the most eminent buildings in the right districts to achieve victory.

Paris is a typical medium-weight Kramer and Kiesling Eurostyle-game with straightforward gameplay, short player turns, and an ingenious point-salad mechanism. You mainly score points by obtaining the right buildings and collecting the right bonus cards. 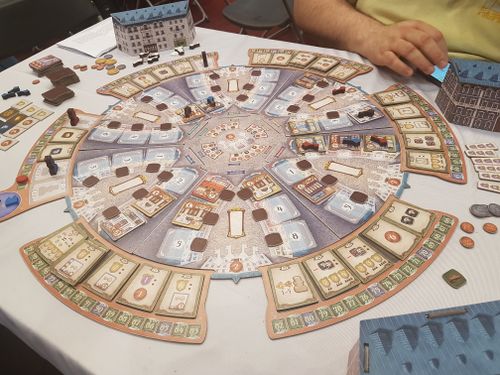