• I'm clearing out my inbox since we're nearing the end of the year, and I'd wager that at least 20% of the messages are notes that I sent to myself about Japanese games that I swore I'd follow up on at some point.

For some of those titles, that time has finally arrived, starting with Couperation, a 2-4 player game from Yusuke Sawaguchi and Fudacoma Games that debuted at the end of 2018 and that strikes all of my "laying numbered cards in order" triggers:
Quote:
In Couperation (クーペレイション), players try to play cards from their hand to create a card pyramid seven layers high while staying within certain rules for the placement of cards.

Cards in the deck range from 1-50, and the cards numbered 1 and 50 — along with 2-4 other random cards — are placed in the reserve at the top of the playing area before the game begins. Each player receives a hand of three cards.

On a turn, you draw 0-4 cards from the deck depending on which card was played the previous turn. (The first player of the game optionally draws one card.) Then you can play a card face up or face down in the pyramid. Within a row, card values must escalate from left to right; when placing a card on a higher row, that card must be supported by two other cards and the newly placed card's value must be between the values of the two supporting cards. When you place a card face down, you ignore the value restriction.

If you manage to create a card tower seven layers tall (i.e., with 28 cards) and all those cards are face up, then you win.

Once you play a few times, you can add the Finish card (#25) to the game. During set-up, you shuffle this card in the bottom half of the deck. Whoever draws it places this card in front of themselves, then draws a replacement card. The Finish card is part of this player's hand, but doesn't count against their three-card hand limit. The Finish card cannot be played face down, and if it's removed from the tower, it must be placed face up in front of the active player. The Finish card must be the final card played at the top of the tower for players to win.
The image below shows what the game looks like during play. Complete English rules are available on the publisher's website (PDF).

• Let's Make a Cake puts wooden cubes to use in a game for young players from Toshiki Sato and his Sato Familie brand:
Quote:
Players bake some cakes, and the player who bakes the most delicious cake is the winner. A delicious cake is one that either has all the same fruit on the cake, or all different fruits on the cake.

Players pick fruits from a bag and put them on their cakes. When putting fruit on the cake, you should look at the cakes the other players are making. You can try to work out which fruits are more likely to come out of the bag, by seeing what has already been made. This will help you win!
Completed cakes shown below!

I love this game💕 It's a piece of cake!🍰 It will be out in the market this coming May! Thanks for sharing your new board game with us @toshikis227!😉 pic.twitter.com/6Ixt4uBvgs

• The Fort of Gold is a solitaire game from designer Hakushi and publisher Kuuri Keikaku for which you can read the complete English rules online (PDF) or the summarized rules right here:
Quote:
The Fort of Gold (金の砦) is a solitaire game in which you take on the role of a sorcerer manipulating mana to collect seven treasures. There is one deck of treasures and one of magical spirits. Spirits and treasures both have a set of three elemental symbols, where each symbol can be one of earth, air, fire, or water. In order to collect a treasure you need to create a set of one or more spirits that can match with all the elements on the treasure.

However, you may not be able to collect any of the treasures initially exposed. In that case you can swap the exposed treasures or peek at and rearrange the deck, but these both require more demanding combinations of elements.

You win if you can get all seven treasures, but you lose if you're stuck without any legal actions. Can you activate all the spirits before your mana runs out? 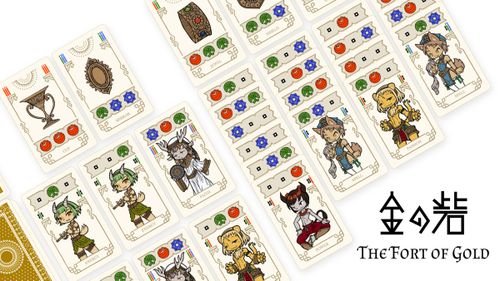 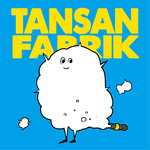 • Publisher TANSANFABRIK always has sharp-looking games, and early 2019 saw the release of QANAT from the design team of Tansan & Co. An overview:
Quote:
In the near future, civilization has dissolved. You must try to collect cultural treasures from the ruins of what was, specifically CDs. You'll need to manage three kinds of luck — chit-pull, random tile placement, and dice — to become the greatest treasure hunter.

The game of QANAT has a map of connected spaces, some of which are dig sites that may have CDs. Each turn you move by pulling chits from a bag, choosing when to stop. Most of the chits are normal moves, but some are events that can be good or bad. If you arrive at a dig site, you can try to dig up a CD by rolling over the dig number for the region. Some dig sites will end up being duds with no CDs at all, and if you find a CD the value of them varies.

In order to get an advantage over the other treasure hunters, you need to decide when to use special powers to mitigate the effects of luck. Can you get the most valuable CDs? 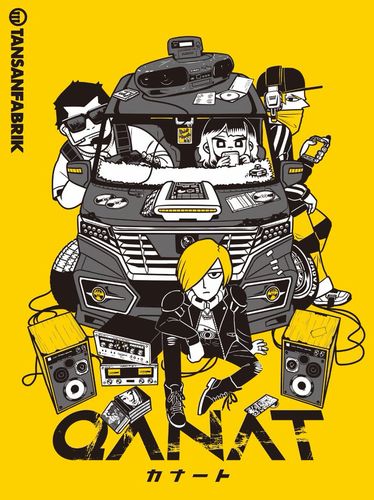 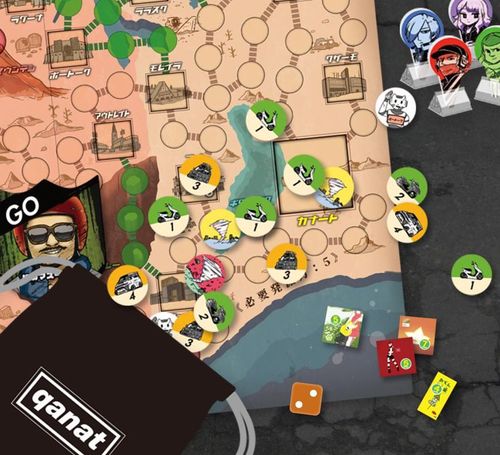