Welcome...to my Shed!
Patron Badge for 2004, 2011 through 2018, 2020
(this is now, in my mind at least, an established Christmas tradition: read it yourself, to your neighbours, to your children and/or your gaming group. Just the one more sleep!)

'Twas the night before Christmas, when all through the house
Not a person designing (not even Risthaus)
The Tapestrys hung by the chimney with care,
With hope that there might be an actual board game in there;

The children were nestled all snug in their beds,
New Nova Luna plays itself in their heads;
And mamma in her 'kerchief, and I in my cap,
Had just settled down with the Le Havre app.

There came such a noise from the Study below
We both thought, at first, "We're Finished, you know!"
Away to the Games Room I flew fast-as-able
Tore open the cupboards and unfurl’d the table.

The moon on those shelves of some new-varnished pine
Gave lustre of mid-day, made all boxes shine!
And nestled amid all the Patchworks and stück
Was eight caribou and a tiny wheeled truck 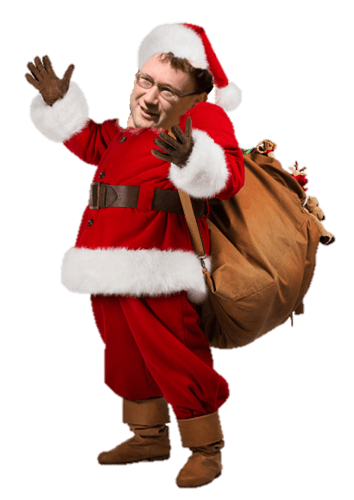 With a little old driver, so quick to manoeuvre,
I knew in a moment it must be St. Uwe!
More rapid than eagles his coursers they came,
And he whistled, in German, and called them by name:

"MERKATOR! and REYKHOLT! now ORA! LABORA!
LOYANG and HENGIST! and mighty CAVERNA!
To the shelving for Euros! To the Tower of Dice!
To the Lookout edition of Nusfjord (nice!)

As punched cardboard sprews that fill rubbish bins high
When caught by the chill wind, mount up to the sky,
So up through the ‘roll-and-writes’ reindeer they flew,
With the Moor Visitor deck, and St. Rosenberg too.

And then, in a twinkling, I heard o’er the peace
The prancing and pawing of Friedemann Friese!
I let out a cry at his brightly-green quiff!
Down the Fortress-like chimney he fell with a sniff. 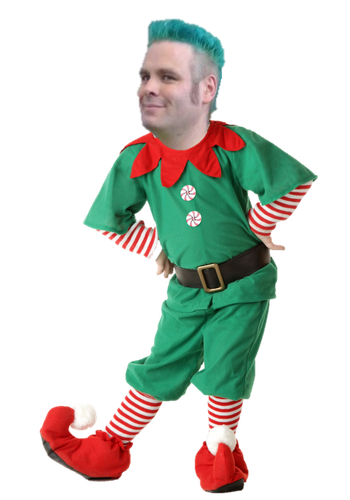 He was dressed all in fur, from his head to the floor,
And the holes in his belt numbered five hundred and four
Some Funkenschlag maps they were flung on his back,
And he named himself ‘Greench’ as he gave me a smack!

His eyes – how they twinkled with mischief un-hid
For he carried a mint kartenspiel Power Grid;
His droll little mouth opened wider and smiled
As a new batch of Fast Forward games he'd compiled!

While Fiener Sand burnéd away in his teeth!
And the smoke it encircled his head like a wreath;
He had a broad face and a little round belly,
That shook, when he laughed, like a bowl of green jelly.

He was chubby and plump, all arrayed in jade cloth
And riding along on the back of a Sloth;
But a wink of his eye and a twist of his head,
Soon gave me to know I had nothing to dread;

He spoke not a word, but went straight to his task,
And filled all the stockings...then he beat me at Klask!
He smiled – yes, he smiled! His ankle-bells tisch-in'
He gave a recycle pack for my old P-Grid edition!

He sprang to the sleigh and St Uwe gave whistle,
And away they both flew like the down of a thistle.
But I heard them exclaim, though I felt pretty whacked:
"Frohe Weihnachten euch allen, und allen eine gute Nacht!"