• Let's continue to explore the unexpected in game design by checking out a few other games released by Japanese designers, such as ダイジョブ迷宮 (Fine Job Labyrinth) from designer ましう (Masyu) of ましうgames (Masyu games). This title for 2-3 players was released at Tokyo Game Market in November 2019. An overview of gameplay:
Quote:
In ダイジョブ迷宮 (Fine Job Labyrinth), players lay out the walls of a dungeon (printed on paper), then take turns placing vertical wooden slabs (representing stone statues) within this dungeon to create a labyrinth. Gems in the dungeon represent touchpoints that you must visit while making your way through the labyrinth to the final gem on the far wall, and to traverse the labyrinth, you must start with at least one finger on the table near the entrance, then trace a continuous path through the corridors, not knocking over any stone statues along the way or else you'll take damage! 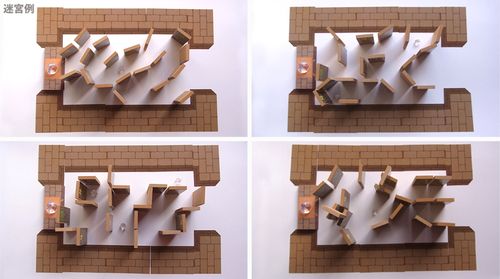 Sample labyrinths
In addition to demonstrating gameplay, this video will give you a new earworm to cultivate and cherish throughout 2020:

• This title follows Masyu's game with a more familiar playing style from the May 2019 Game Market: Building Sword as Soon as Possible, a.k.a. ナルハヤのつるぎ.

In this game, each player has set of six cards that depict portions of elaborate swords. Each round, reveal one request card from the deck to show the one or two swords that need to be created. Players then race to arrange their cards the proper way — flipping and overlapping them as needed — to recreate those swords in front of them. Whoever does so first claims the request card, and whoever first collects five request cards or three cards bearing the same guild icon wins!

Masyu already released two editions of the game on their own, with educational book publisher Gentosha releasing an edition of its own on Dec. 11, 2019. Fast work! 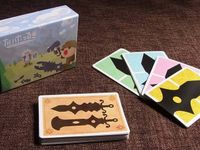 • Masyu is also the artist and designer behind Hyper Super Yoga (すごくすごいヨガ), a 2018 release in which players grab limb cards from a draft pile to recreate target poses with their yogi as best as possible. 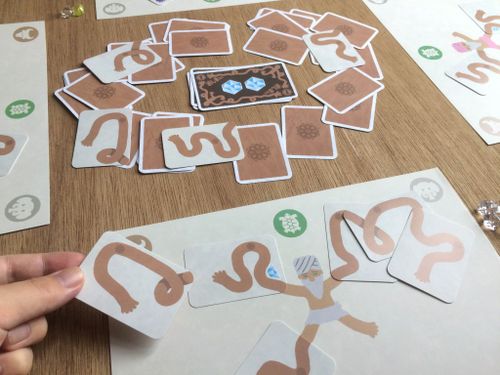 • The issue of cultural appropriation flares up at times in the game industry, such as when a pair of Italian designers worked with a German publisher on a game based on activities of Native Americans in Canada apparently without consulting any Native Americans in Canada, yet I can understand the appeal for using an "exotic" setting given that my own culture feels blah to me. What stories do I have that I'd want to use for the setting of a game? None come to mind.

I bring up this issue after learning about Satoru Nakamura's 転がる芝浜 (The after story of "Shibahama") from March Hare Games. Here's an overview of this 3-4 player game that debuted at the Nov. 2019 Game Market and that will be available once again at Game Market in April 2020. I'll be eager to get a copy at that time!
Quote:
転がる芝浜 (The after story of "Shibahama") is based on a human-interest rakugo vignette named "Shibahama". The title "転がる芝浜" (pronounced "Korogaru Shibahama") means "Rolling Shibahama", and the game has area control and resource management mechanisms and uses action dice.

You are an industrious fish merchant in Edo (ancient Tokyo). You used to be a lazy drunkard, but with a support of your wife, you have changed your mind and successfully abstained — but you cannot force your employees to abstain, and sometimes booze is required to keep business relationships. Are you able to manage your business while staying away from temptation?

You roll and place novice-worker dice and senior-worker dice on the game board to obtain fish, but you have to use these fish early because they gradually decay. 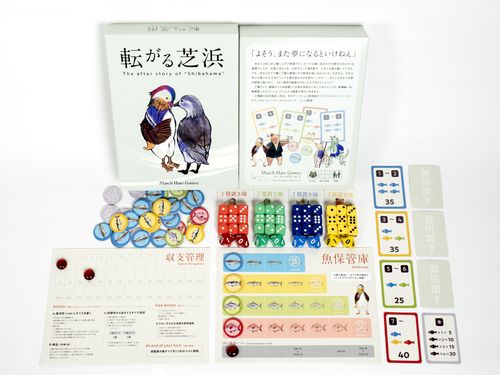 • HIDEOUT is a new version of TimeBomb II from designer Yusuke Sato and publisher New Board Game Party, with the core of the game being similar to the original but better suited for more casual players, according to the designer, "after purging complex elements of the game".

The gist of the game is that several terrorists are hiding among the 4-6 players in the game, with everyone appearing to belong to a SWAT team that is trying to destroy the terrorists' hideout. If the hideout is destroyed in time, the SWAT team wins; otherwise, the terrorists' bomb will explode. (For background, here's my overview of TimeBomb II from 2016.)

• Not sure where else to note this, but I thought fans of JP games might be curious to learn that in a Dec. 2019 blog post Oink Games mentions that Jun Sasaki's Deep Sea Adventure has sold 180,000 copies.

• Capsule Hole (a.k.a. カプセルホール) is a tile-laying game with a trick-taking-ish element that designer るりるり (Ruri Ruri) released at Game Market in May 2019 through their own るりるりゲームズ (ruri ruri games). The scoring element is a neat "shoot the moon" challenge that I can imagine being incorporated into other games:
Quote:
The game consists of forty tiles numbered 1-40, with the tiles being grouped in four buckets on their backs: 1-10, 11-20, 21-30, and 31-40. Players draft tiles at the start of the game while seeing only their backs; tiles in the first group have a "capsule opening" on only one edge, while tiles in the second group have a straight or curved tube from one edge to another, and tiles in the fourth group generally have three or four open edges. You can look at the faces of your tiles are you draft them.

When a capsule is closed, akin to a road being closed in Carcassonne, whichever players have the most cubes in it score points equal to the number of energy symbols in that capsule. After all the tiles have been played, whoever has the highest score wins — except that if exactly one player has scored 0 points, then they win instead! 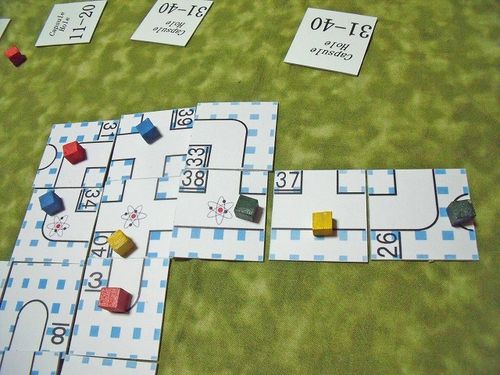