Gloomhaven Gets Forest Update
The digital version of Gloomhaven arrived on Steam Early Access earlier this year and won't reach its final release until some time in 2020. That's not to say that this beta version isn't worth your time. There's a ton of stuff to do in the game already and the team at Asmodee Digital and Flaming Fowl Studios are continually adding new content. A couple weeks ago it was a new character, this time around it's a new biome: The Forest.

Asmodee wrote:
We’re very pleased to announce the release of a new major update for Gloomhaven! You can now roam the gloomy forests of Gloomhaven, but do not expect to find any rest, as fearsome enemies roam this terrifying environment.

Brace yourself to meet new guards and archers, from the race of the Inoxs and Vermlings. Do not underestimate the forest Imps and the mysterious powers of shamans. And stay sharp, for hounds lurk among the vegetation...
For the bravest of you, a new monstrous boss is awaiting, beware!

Welcome them well, with a sword and a few fireballs!

With this update, you will also discover an all new music track and six new cards for your characters. We also improved the GUI with an undo step to the Ability Infuse items, an info bar which displays the XP earned and more!

Spoiler (click to reveal)
-A whole new experience when exploring new environments and facing new challenges.
-7 new enemies, and their Elite variants (Vermling Scout, Vermling Shaman, Inox Guard, Inox Shaman, Inox Archer, Hound, Forest Imp).
- A new boss (Inox Bodyguard).
If that's not enough, they've also put Gloomhaven Early Access on sale! You can nab it now for 25% less than some dumb blogger who paid full price even though he doesn't have a Windows PC to play it on. Don't be like that loser!

Look for more Gloomhaven updates to land and, who knows, at some point we might even get a real release window.

LOTR: The Adventure Card Game becomes The Definitive Edition
If you think we're done with Asmodee Digital news this early in the post, you haven't been around long have you? Of course we have more Asmodee goodness, this time dealing with their (and Fantasy Flight Interactive's) card questing puzzler, The Lord of the Rings: Adventure Card Game.

Or, should I say, Lord of the Rings: Adventure Card Game - Definitive Edition?

Yes, they changed its name but the changes go much deeper than the name. What are they? I'm glad you asked!

First of all, this new edition includes both the Chapter 2: The Shadow's Fall expansion and the new Chapter 3: The Witch-king's Grasp. The latter is their biggest expansion ever with 249 new cards, over 20 new locations, and a slew of new enemies. Yep, that's right, no orcs!

Asmodee wrote:
This is an all-new game mode designed to challenge players in a single randomly-generated Encounter, where you’ll face a random setup of Minions and Villains drawn from across all our releases.

The Mirror of Galadriel is a fast-play mode that you can play alone or with a friend. Players must first defeat a wave of Minions before confronting a final Villain. Each time you play, you'll be confronted with a different challenge, making the mode highly replayable. We can also expand this mode by adding new content with each new release we make.
So, a bunch of new content and a brand new random game mode! Impressive! What's more impressive is the price. Absolutely free. Yep, you read that right. If you already own LOTR:ACG, then all this new content will be waiting for you on you laptop next time you update. If you were hoping to play on your Switch, Xbox, or PS4 instead, you'll still get it free but you have to wait until 2020.

If you haven't purchased LOTR:ACG before, well, you'll have to pay. Lucky for you, however, is you can get the complete Definitive Edition on sale! 25% off means you can nab all this goodness for only $15 right now.

Asmodee Having Massive Sale
Yep, more Asmodee. Turns out LOTR:ACG and Gloomhaven aren't the only apps they're putting on sale. It's a long list, so I'll just drop it here for your perusal. No links. Deal with it. 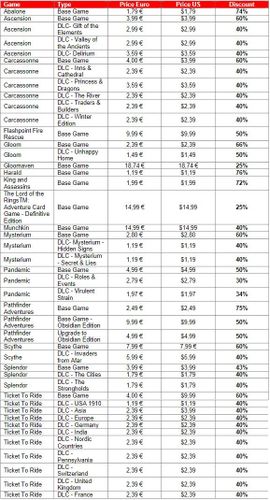 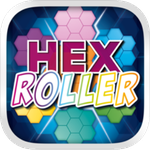 HexRoller Released (a long time ago...)
This is one that I've known about since...oh...October and I just kept forgetting to add it to any posts (not that there were any for a while there...). Anyway, if you like quick roll & write games on your phone (and if you don't there's something wrong with you), then you'll be interested to hear that Outline Development has released a digital version of HexRoller.

If Outline Development and roll & write sound familiar, it's because they're the team behind the addictive and anger-inducing Noch mal!. If HexRoller is even half as good as that one we should all be happy.

Outline Development wrote:
In this fast and tricky roll-and-write game each player attempts to place the rolled numbers in their hex grid the best, to fill up areas and to reach special targets as connections and straights.


• Official license
• Easy start into the game
• Game mode "Solo" for single players
• Game mode "Duo" for two players on one device
• Auto-Select Dice and Auto-Complete Turn
• Using the app as a digital score pad or digital dice
• Local leaderboard for solo mode
• Supporting Game Center with leaderboard and achievements
You can nab it for your phone or tablet right now! 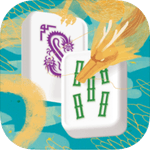 Dragon Castle Released
Here's a game I hadn't heard of but now, thanks to the wonders of the App Store, can play it on my phone. It's a take on Mahjong and I say that as someone pretending to know what that means.

I mean, I've seen mahjong but have no idea how it works, so I'm ready to jump right in an blurb the hell out of this one:

Horrible Guild wrote:
In Dragon Castle: The Board Game, you will pick tiles from the central castle to create sets of tiles of the same kind in your own realm and score points. You will also build Shrines, trigger powerful Spirit abilities, and appease the tastes of the Dragons to score bonus points! May the best builder win!

During your turn, you can take a pair of identical tiles from the central "castle" and place them on your own realm board to build your own castle. Alternatively, you may sacrifice these tiles to acquire shrines or extra points.

Every time you create a set of tiles of the same kind, you flip them face down to score points and build shrines on top for even more points, if at the cost of limiting your building options! You may also take advantage of the spirits and their game-changing powers to manipulate the board... Finally, don't forget to check the active Dragon, and to follow the building requirements to score bonus points.

TEST YOUR BUILDING SKILLS IN SOLO

Play against up to 3 adjustable AIs to sharpen your castle building skills!

OR PROVE YOUR MASTERY IN MULTIPLAYER MODE!

Play against builders from all over the world online and get to the top of the worldwide leader-board!

• The mystical universe of the board game, fleshed out and digitally enhanced
• A tactical gameplay with variable boards, objectives, and powers, allowing for countless different playstyles and strategies!
• Solo mode against up to 3 Computer Opponents
• Asynchronous Online Multiplayer Mode with a worldwide leader-board
I'm going to go buy this just because they mention asynchronous on the iTunes page which no one ever does making it a pain to figure out if a game is real-time or not. Hooray, Horrible Guild!

I noticed the app was review bombed upon release due to some unfortunate crashing issues, but it appears that those have been ironed out and more recent reviews are darn near glowing, so head over and pick this one up. 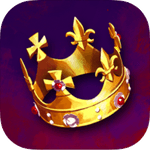 The Rose King Now Available as King Tactics - Wars of the Roses
Another one that I've known about for a bit but keep forgetting to add to a post is this one from our friends at United Soft Media (USM). It's based off the 2-player KOSMOS title, The Rose King, but they changed the moniker to the less than flowing King Tactics - Wars of the Roses. <insert shrug emoji here>

In true USM fashion, the iTunes page is in German and, although I have family there and will be spending Weihnachten in Munich, I can't speak for anything. Thus, here's Google Translate with the blurb:

USM wrote:
The king is dead! The York and Lancaster houses both see themselves as legitimate heirs to the crown and fight bitterly for power. With your troops, go to the historic battles of the Rose Wars and conquer England!

Can you win the battle for yourself? Prove yourself as a skilled general and demonstrate your tactical skills. Just like in the legendary Rosenkönig board game template, you can develop a good strategy to defeat your opponent and survive on any battlefield!

Place your knights skillfully, send out your troops and conquer as large a coherent area as possible. Obstruct your opponent, thwart his plans and break his ranks.

Play against resourceful computer opponents, friends or challengers from all over the world in challenging duels!

• Strategy game for one or two players
• Few rules - exciting until the last turn
• Easy entry: Become a battle-proven knight quickly.
• Leaderboard: Fight your way to the top of the generals.
• Fun to play based on Dirk Henn's KOSMOS board game "Rosenkönig"

• Campaign: Master all battles of the Rose Wars in historical order.
• Free play: play against the AI ​​in three levels of difficulty.
• Online multiplayer: play online against friends or against other players from all over the world.
• Offline multiplayer: play with a friend on site on one device and experience a real board game feeling anytime and anywhere.
You can pick it up right now for iOS/Android. 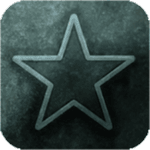 Just released is version 3.0 of the card game and who better to tell you about it than the dev himself:

Winterflood wrote:
Siberian Dawn on Steam has now been updated to version 3.0 with a number of game additions improving the experience, including the following highlights:

- Fate Helix gains a Sub Hub that now shows previous fate draws and the content of each fate deck, making Fate mechanic now clearer.
- Status Tactic cards have gained an Act ability so they can now be used to gain certain resources, helping the early game.
- The two Union hero cards have had their abilities altered to make them stronger in the game, as they should be.
- Litalis Guild cards now have a unique speciality based on Threat making them more interesting.

Mission Pack 2 has now been released on Steam giving 3 new full missions that complete the first chapter of the Siberian Dawn story. With new cards, hostile units, and challenges for each Mission this pack takes Siberian Dawn and the Lore Engine to the next level.
That's not all! The game has only been available via Steam...until now. Now it's also available for Android! Pick it up and carry it with you if you aren't hip-deep in the Apple ecosystem (like someone who might be writing this). The Android version has all the content of the PC version, so you're not missing out on anything.